The liberal media's push for gun control has long included the tactic of attempting to shame the National Rifle Association (NRA) and other gun rights activists into silence. That tactic was once again deployed by MSNBC's Thomas Roberts this morning in his interview with liberal Democratic Sen. Richard Blumenthal (Conn.), who is calling on the nation's oldest civil rights organization to cease and desist robocalls to phone numbers in the Newtown, Connecticut, area.

At no point in the softball interview, however, was it mentioned that some Newtown parents like Mark Mattioli and Bill Stevens have testified in opposition to fresh gun control laws nor that there's been a spike in applications for gun permits in Newtown following the mass shooting, perhaps because those facts cut against the notion that the entire Newtown area is anti-NRA as a result of December's tragedy.

Below is the transcript of the interview, conducted during a segment entitled "NRA's New Low?":

THOMAS ROBERTS: Our other big story today is talking about lawmakers in Connecticut considering gun control measures, including banning assault weapons, and high-capacity ammunition magazines. And it's growing with some outrage after the NRA released new robocalls to residents of the Newtown, Connecticut community about these measures. Just take a listen to yourself of these calls. 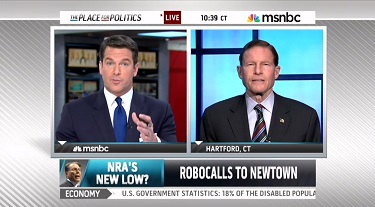 ROBERTS: Joining me is Richard Blumenthal, Democrat from Connecticut, who is calling on the NRA to cease and desist with those calls. Sir, it's good to have you here. You and your colleague, Sen. Chris Murphy, who is also a Democrat from Connecticut, wrote a letter to the NRA, saying quote "with the robocalls, the NRA has stooped to a new low in the debate over how to best protect our kids and our communities. Making these calls opens a wound that these families are still trying hard to heal."

What surprised you, sir, most about knowing these robocalls were going on and then hearing them for yourself?

Sen. RICHARD BLUMENTHAL (D-Conn.): I was absolutely astonished, as well as outraged, that the NRA is calling families in Newtown, Connecticut, impacted by this horrific tragedy. And reopening wounds and feelings of grief and hurt that remain very real for these families.

And, the reason I was so surprised is that, you know, it had to be calculated and intentional. They had the technology to avoid calling certain areas, and even if they had that technology, they chose to go ahead and do it. So I think the NRA not only should cease and desist the phone calls, but also it owes Newtown an apology, and I think that everyone is entitled to an opinion, everyone is entitled to political action, but to make these calls really is beyond the pale.

ROBERTS: Sir, as we have this brand new CBS News poll finding a drop in support around the nation for stronger gun laws, it's at 47 percent today, that's a  ten-point drop from December. And the NRA has been labeling the uptick for gun control the Newtown effect.  What do you make of the drop in public sentiment, and do you think the appetite is starting to wane for quick action based on what happened in Newtown, for better gun control in this country?

BLUMENTHAL: The majority of Americans have favored and continue to favor measures to protect children and all citizens against gun violence. I think that majority is still there. It's been largely a silent majority, and the challenge ahead in these next couple of weeks is to make sure that silent majority becomes more vocal. I would not put a lot of stock in poll numbers one way or the other because I think the Americans want something done. That's what I've heard again and again and again in Newtown and Connecticut across the country, please do something about gun violence.

So stopping illegal trafficking, for example, in stolen weapons that have caused more than 2,500 deaths since Newtown, strengthening school safety measures, and imposing a requirement that there be background checks, criminal background checks, so that people who are convicted felons or fugitives or drug addicts or the seriously mentally ill or domestic abusers, I think those kinds of measures have attracted a real consensus. And the ban on assault weapons and high-capacity magazines I think is still very much alive, certainly in the states, but no state can do it alone.

ROBERTS: Sen. Blumenthal, thank you so much, sir.


An objective journalist might raise questions about the propriety of two U.S. senators sending a cease and desist letter to a civil rights organization exercising its First Amendment rights, but Roberts failed to even consider that it might be repugnant to some, particularly gun-rights advocates, that elected officials were trying to cow a group into silence.