But rather than couch the stay on the new regulation as a victory of individual liberty, the editors described the ruling as "a setback for Mayor Michael Bloomberg, who has backed several laws aimed at improving the health of New Yorkers."

In a five-paragraph item at  the CNNMoney website, writer Melanie Hicken did note that "many have decried the ban as a sign of the growing "nanny-state" and an unfair intrusion on personal freedom." 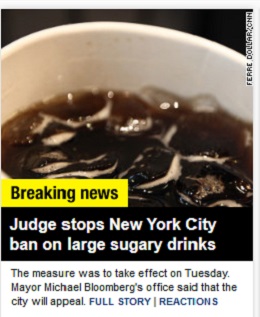 As the Wall Street Journal explains, the judge who tossed out the regulation found the new soda limitation law "fraught with arbitrary and capricious consequences" but the regulation itself transgressed the bounds of the city's health codes (emphasis mine):

In his ruling, Judge Tingling found the Board of Health's mission is to protect New Yorkers by providing regulations that protect against diseases. Those powers, he argued, don't include the authority to "limit or ban a legal item under the guise of 'controlling chronic disease.' "

The board may supervise and regulate the city's food supply when it affects public health, but the City Charter clearly outlines when such steps may be taken: According to Judge Tingling, the city must face imminent danger due to disease.

"That has not been demonstrated," he wrote.

Judge Tingling also suggested that Mr. Bloomberg overstepped his powers by bringing the sugary drink rules before the Board of Health, which is solely appointed by him. The City Council, he wrote, is the legislative body "and it alone has the authority to legislate as the board seeks to do here."