If the Supreme Court strikes down section 5 of the Voting Rights Act, it would be a "one of the most jaw-dropping acts of, you know, judicial activism activism that we've seen in probably a generation," MSNBC's Chris Hayes insisted on the March 1 edition of Now with Alex Wagner.

That line of argument is certainly debatable, but Hayes decided to go way off the deep end by then saying that the conservative jurists on the Court, particularly the chief justice and Antonin Scalia were devoted to an "adolescent" jurisprudence on issues of racial equality, because they, wait for it, believe that the law should be colorblind:

CHRIS HAYES: Jeffrey Toobin has a great column basically saying, look, he [Chief Justice John Roberts] wants his legacy to be declaring an end to racism in America and taking away the policies, laws and constitutional structures that have been the weapons to fight white supremacy, institutionalized white supremacy. 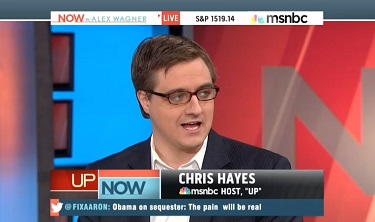 And if you go back and look at some of this writing on this topic, I mean, he and Scalia have this very clear view that the primacy of the Constitution puts primacy on color blindness as a thing to pursue as opposed to racial equality. And of course the mechanisms by which we ensure racial equality often require very granular attention to race. For instance --

ALEX WAGNER, host: To see the world in black and white as it actually is!

HAYES: Right, exactly. So when you're looking at, okay, Texas wants to redistrict. You have to go through the Texas districts and see, are there going to be majority minority districts? Is this being done to disempower people of color?

And he's got this famous line in a dissent from a Texas case in 2006-- in which actually the court found in favor of the plaintiffs -- in which he says it's a sordid business, a sordid business, this divvying us up by race. That it's icky and gross for us to be looking at who's black and who's white. Can't we all just you know get along and be colorblind? And, it's genuinely an adolescent view of race relations. It's a shockingly, shockingly naive view of race in this country.

Rather than object to Roberts and Scalia on the constitutional merits, Hayes resorts to misrepresenting and deriding a straw man version of what they justices actually believe. What's more, the text of the post-Civil War Amendments -- and particularly the 15th Amendment guaranteeing the right to vote not being abridged on account of race -- is fundamentally colorblind.

Nowhere in the Amendment is there any language authorizing Congress to enact racially-conscious remedies to reverse longstanding discrimination and disenfranchisement:

Section 2.
The Congress shall have the power to enforce this article by appropriate legislation.

It was a racially-obsessed Supreme Court that was obsessed with color in Dred Scott. It was the 14th Amendment -- excerpted via the National Archives webpage below -- which overturned once and for all that hideous ruling, and that by recognizing the dignity and citizenship of every person born in the United States (emphasis mine):

Note: Article I, section 2, of the Constitution was modified by section 2 of the 14th amendment.

Merriam-Webster defines adolescent as "emotionally or intellectually immature." Given Hayes's treatment of Scalia and Roberts, it seems he's the one exhibiting intellectual immaturity.