In a segment this morning discussing the breaking news that a panel of judges on the Court of Appeals for the District of Columbia unanimously ruled that some of President Obama's recess appointments had been made in an unconstitutional manner, MSNBC's Thomas Roberts turned to network contributor and former Democratic Senate staffer Jimmy Williams for his reaction.

Williams conceded the the court had ruled correctly, but rather than chiding the president for violating his oath of office with unconstitutional appointments, he blamed Senate Republicans for driving Mr. Obama to do so. For his part, Roberts agreed, mumbling "mm hmm" in reply to the ex-lobbyist's partisan swipe [MP3 audio here; video follows page break]: 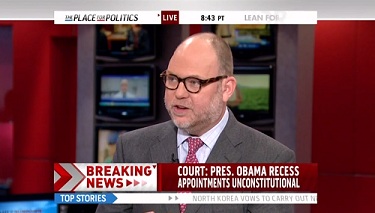 THOMAS ROBERTS, anchor: All right, so Jimmy, this is a victory for Republicans. What are the implications because this is not a good way to start for the president's second administration, to get this handed down.

What does it mean? It means that everything -- those appointees, plus the appointment of Richard Cordray at the CFPB: the Consumer Financial Protection Bureau, anything that those two agencies had sent out as rulings now can be deemed invalid or null and void. That can affect all kinds of things from credit cards, interest rates, anything that those two agencies had done now is gone. It's over. It didn't count.

And so for the Republicans and for the chamber of commerce and other business groups, this is a big victory.

But there's -- that's a short-term victory. The problem with it is this never would have happened had the Republican senators not been filibustering these Republican nominees to begin with.

Roberts then turned back to NBC justice correspondent Pete Williams (no relation) to discuss what would happen next. Pete Williams noted that the Obama administration would likely appeal to the Supreme Court, which would "have to resolve it."