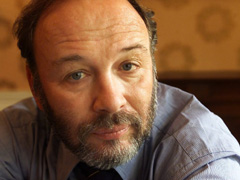 Anyway, he's catching up and he's come to the conclusion that Professor Obama totally schooled the GOP.

Why? Because the president talked a lot but observers found the event boring, ergo proving both Obama's brilliance and the dimwittedness and poor statesmanship of the GOP opposition.

Yes, that really is the gist of his argument from a February 26 Swampland blog (emphasis mine):

Shame on me. I was elsewhere yesterday and missed the health care summit. I'm catching up now, and the tea leaves seem to indicate that Obama came out well ahead of the Republicans. How do I know that? From Matt Drudge, of course. I mean, Drudge's takeaway from the summit is that the President talked a lot--actually, the President, the Congressional Democrats and Republicans each spoke an equal amount--the Times of London found it boring and the networks turned to other programming.

Reading between the lines, you can conclude that the Republicans had nothing very interesting, or clever, to say (and were never able to get the President's goat). And that the President was his usual, unflappable, well-informed self. You can also conclude that not much progress was made at the summit, as Karen reports here--but that's a huge surprise, right?

Reading further, in the New York Times, I can't find any indications that the Congressional Democrats were actually present at this meeting. Certainly, they had nothing notable to say, no new compromises to propose--which leads to another obvious conclusion: the Republicans have been absolutely recalcitrant in this process, but the Dems are no bargain, either.

I remain convinced that if the Republicans actually wanted to deal with this issue, they might have gotten some major concessions from the President--malpractice reform, for sure; perhaps a greater use of insurance polices that emphasize catastrophic coverage (as the Republicans wanted), maybe even a system--as John McCain proposed during the campaign and health wonks everywhere favor--that truly limited the deductability of  corporate health care benefits. To get these things, however, the Republicans would have had to say yes at some point. As in, YES, I'll vote for the bill if you throw in malpractice and pay for it with the money you get from limiting deductability. That is what happens in a negotiation. That is what is supposed to happen in a democracy.

But the obvious truth here is that the Republicans do not want any sort of health care bill to pass at all because they do not want to hand President Obama a victory. Shame on them.

To Klein, the possibility that Republicans want to kill ObamaCare because they genuinely are concerned that it will be harmful to the country is out of the question, although he paints Democrats as well-intentioned but feckless in handling the legislative process.