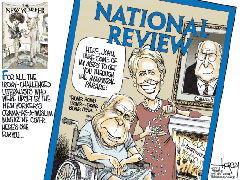 Liberal political cartoonist David Horsey defended the New Yorker's satire of the Obamas with his July 15 Seattle Post-Intelligencer drawing (shown at right, for a larger size check the P-I Web site here) while raising some left-wing tropes about the presumptive GOP nominee.

"For all the irony-challenged literalists who were upset by the New Yorker's Obama-as-a-Muslim magazine cover, here's one for you," reads the caption to the left of Horsey's cartoon depicting John and Cindy McCain as being lampooned on the cover of National Review.

Standing to McCain's left is wife Cindy, frantically pouring scores of pills from a medicine bottle while saying, "Here, John, take some of my meds to get you through the inaugural parade." Meanwhile, a portrait of Vice President Dick Cheney hangs above the mantle, the fireplace ablaze with the Constitution in lieu of firewood.

What say you? Was the Seattle-based cartoonist simultaneously defending the liberal New Yorker magazine while playing up radical left-wing fears about McCain? Or am I reading this wrong and Horsey's intent was really to criticize the liberal magazine for an ill-advised cover?