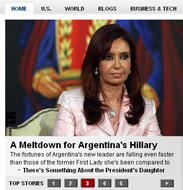 "A Meltdown for Argentina's Hillary" blares the teaser headline in the Top Stories slideshow on Time.com's front page.

"The fortunes of Argentina's new leader are falling even faster than those of the former First Lady she's been compared to," continues the caption on the front page.

The June 2 article in question by Uki Goni delves into how President Cristina Fernandez de Kirchner has seen her approval ratings plunge "into George W. Bush territory barely six months into her administration," due in large part to concerns over inflation.

Yet while Goni noted frustration over her policies, Fernandez's ideology was curiously left out of the article.

The former first lady and senator is a "center-leftist" who is "close to Venezuela's leftist President Hugo Chavez" according to Reuters. As research fellow James Roberts at the conservative Heritage Foundation projected last October when she won the presidency, Fernandez would hold to a socialist tack when guiding the ship of state.:

The... ascension of Senator Cristina Fernandez de Kirchner to the Argentine presidency ...succeeding her husband, Nestor Kirchner, is unlikely to improve relations between Argentina and the United States. Although her campaign pronouncements convey an image of moderation in foreign policy matters, Cristina Fernandez would most likely continue the leftward drift of Argentina and its cozy relationship with Venezuelan dictator-;President Hugo Chávez. Chávez has sent billions of dollars of Venezuela's oil wealth to bail out Argentina's debts; Argentina's credit rating has yet to recover from the major default the government declared in 2002.

Barring an unexpected shift in Fernandez's thinking or tactics, there is little hope for the economic liberalization so desperately needed in the Argentine economy. Once the showcase of Latin America, the economy has fallen further and further behind as a result of bad policies.