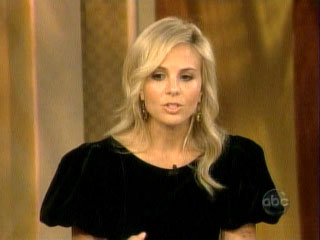 Elisabeth Hasselbeck finally called out some of "The View"co-hosts on the Sarah Palin bashing she finally proclaimed September 25 as "Hate Sarah Palin Day." Immediately the other co-hosts defensively swarmed over the comment denying there is any hate for Governor Palin. Joy Behar claimed "it’s not personal. It’s my country that I’m worried about."

Hasselbeck’s remark was sparked by a discussion over a new YouTube video displaying a Kenyan preacher praying to protect a woman, who resembles Gov. Palin, from witchcraft. Sherri Shepherd and Elisabeth Hasselbeck explained to the other two theologically challenged co-hosts that this is simply a prayer to protect this woman, possibly Sarah Palin, from evil.

Whoopi also defended playing and discussing the video stating "if Barack Obama had been in that church and somebody was praying over him to keep him free from witchcraft, we’d be having this discussion, okay?" However, the previous day, Whoopi sang a different tune responding to Elisabeth’s mention of Joe Biden’s many gaffes.

"I know it is very hard for you to accept that fact that just because someone makes a gaffe, whether it is President Bush waving at somebody who can’t see or Joe Biden gesturing to someone who can’t stand up because they’re in a wheel chair. These are not, these are not the issues. What we want to know is what does Sarah Palin speak- I want to hear her speak. And that to me from now on- I don’t want to hear any more talking heads like you [Elisabeth Hasselbeck] saying- no more BS. Let’s get to what the real facts are."

Elisabeth also tested Joy Behar’s consistency quoting Biden citing "Catholic social doctrine" in his defense on tax increases. Behar responded "I don’t like any discussion of God and religion in the political conversation."

Paris Hilton appeared in the show’s first segment. In a humorous moment, just as she did on the Constitution, Joy Behar demonstrated her lack of basic knowledge of our legal system.

JOY BEHAR: You’re not going to be able to vote are you? I have a friend who was in the slammer. He can’t vote. Weren’t you in jail?

BEHAR: You are? I thought you couldn’t vote if you’re-

WHOOPI GOLDBERG: Only for felonies.

BEHAR: Oh, only felonies. What was your thing? Was it a misdemeanor or something?

HILTON: No, it was driving without a- with a suspended license.

BEHAR: You can still vote with that?

GOLDBERG: There’s a YouTube video of a Kenyan bishop supposedly given Sarah Palin a blessing against every form of witchcraft at her home town church in 2005. I, I don’t know if it’s her, it looks like her. You take a look and tell me what you think.

SHEPHERD: If that is her, I think it’s very cool that they prayed over her. You know, churches, typically when you’re at a church and you go to do something big, the church will pray over you. They did it for me-

GOLDBERG: But is it usually for witchcraft?

HASSELBECK: Well, for anything, any evil.

SHEPHERD: Any evil, to protect you from any evil.

BEHAR: He’s holding her hands open as he asks Jesus Christ to help keep her safe from every form of witchcraft. So it’s not just moose we have to worry about up there. It’s also witches.

HASSELBECK: We would just like to formally welcome everyone to hate Sarah Palin day on "The View."

SHEPHERD: No, no, we do not hate Sarah Palin. Understand us, nobody’s hating on her.

HASSELBECK: This is just something that people pray about. They pray for all evil including witchcraft, hate.

GOLDBERG: Okay, you know, I’m a heathen. So it’s why I ask those questions.

HASSELBECK: You have a place in Heaven Whoopi.

SHEPHERD: But Elisabeth you’re talking to somebody who’s not real familiar with ceremonies that they do in church. I don’t think it’s fair to say that she’s hating on Sarah Palin.

HASSELBECK: No I’m just putting together all of the things we said so far.

HASSELBECK: Why is it- so let’s talk-

HASSELBECK: No, no. I know you don’t but what about what Joe Biden said that he believes in taxes because the Catholic doctrine that he’s been a part of- wait wait. When he says that taxes are appropriate because his Roman Catholic doctrine has stated that for years, why does that not bother you?

BEHAR: It does. You’re bringing it up now. I’ll answer that. It bothers me a lot. I don’t like any discussion of God and religion in the political conversation. I don’t like it

HASSELBECK: You get really fired up about Sarah Palin.

GOLDBERG: I do have to say this before we go. If Barack Obama had been in that church and somebody was praying over him to keep him free from witchcraft, we’d be having this discussion, okay? This would be a discussion-

BEHAR: And we wouldn’t be defending it.