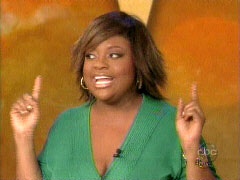 Are Reverend Wright’s anti-American sermons simply taken out of context? According to "View" co-hosts Sherri Shepherd and Barbara Walters they are. Sherri Shepherd first made excuses for Wright claiming "he suffered racism full force,"and then added viewers are not getting the full context and any of "The View" co-hosts could be tagged as racist with a sound bite.

Barbara Walters concurred noting that in Joy Behar calling Barack Obama "literate" could be taken as a racial slur. Elisabeth Hasselbeck struck back challenging the co-hosts to "put [Reverend Wright’s inflammatory remarks] in a context that sounds good. It doesn’t."

Joy Behar, who does not even know the Constitution and its history, took a shot at President Bush’s intelligence labeling him illiterate and claiming if he were to give a speech about race, "it would be about NASCAR."

ELISABETH HASSELBECK: I don’t think it was accurate, it’s just my opinion, to equate his grandmother with Reverend Wright’s statements. And I think that, I don’t think we’re ever going to hear a speech from Senator Obama that sounds bad. He is incredible. He is charismatic. He’s thoughtful. He knows how to communicate, and that is a powerful tool. However, I still have issue with the fact that, you know, if we go back in time when, when Don Imus uttered those racial, racial tones and words that he did, Senator Obama was one of the first to call for his resignation. He said he should step down-

JOY BEHAR: Because he’s- well, can I tell why.

HASSELBECK: Why should I hurry up?

BEHAR: It’s only a one hour show. We all should dialogue.

BARBARA WALTERS: One at a time.

HASSELBECK: He said "there’s nobody on my staff that would still be working for me if they made a comment like that and about anybody of any ethnic group." And then he refused to appear on Don Imus’ show. He said "I’ll never go on." But he returned to this church time and time again. How many times and how many racial slurs do you hear before you walk out of the church?

SHEPHERD: Well, I was just going to say-

BEHAR: After you my dear Alfonse.

SHEPHERD: I was just going to say, this preacher, like you said, he suffered racism full force. And that’s where he’s coming from. He’s angry about that. But you’re getting a sound bite, a clip, and 20 seconds, and everybody around this table, if you took your sound bites, somebody could say "Elisabeth is racist." You are not racist.

WALTERS: She didn’t call you racist.

SHEPHERD: No, but if they took a little bit of a sound bite, Elisabeth, and they played it over and over again-

WALTERS: Of the reverend.

HASSELBECK: -of the reverend speaking are sold on a DVD in that church. What does that mean to me? If my church is selling a DVD, that’s the cornerstone of what they’re preaching.

SHEPHERD: No, that is not the cornerstone of what the Trinity Church is preaching.

BEHAR: This is- let me pass that conversation. We’re talking about Imus, I thought.

HASSELBECK: Imus? Yes, he said he will not go on that show. He returned to this church for 20 years. How many things do you have to say "not for me"?

BEHAR: Imus said something about "nappy headed hoes," which struck Obama personally because he has two little girls.

BEHAR: But you’re mixing apples and oranges together.

SHEPHERD: It didn’t strike you the way it struck-

BEHAR: This is a more personal response to Imus. Plus can I just say one more thing?

BEHAR: That I found it such a relief to hear Senator Obama give such a literate speech. If George Bush were given a speech on race, it would be about NASCAR. [applause] Okay? Let me just say that!

BEHAR: I’m just talking to hear a literate, intelligent, sophisticated speech from a presidential candidate to show that America does have the ability to raise the standard of literacy in this country, so that people don’t have to make fun of us from nation to nation around the world. [applause] Including every comedian. Thank you.

WALTERS: What you just said could be offensive to blacks, that you are happy to hear a literate speech, because, you know, it’s like saying-

WALTERS: Ah, do you remember last week when somebody talked about somebody being articulate, and Whoopi I believe or somebody said "but you wouldn’t call a white person articulate"?

BEHAR: Why can’t this be offensive to whites in some saying George Bush is illiterate?

SHEPHERD: Well, hold on, hold on. I let you speak all the time. What you just said, when you said "he was literate." You were talking about George Bush saying something about NASCAR and race.

SHEPHERD: If you take that out of context, that little part of what you said about Obama, and put it on YouTube, and played and played it, they can say you are racist.

WALTERS: I agree. That’s what I was just saying.

HASSELBECK: The United States of the K-K-K-A. Put it in a context that sounds good. It doesn’t.