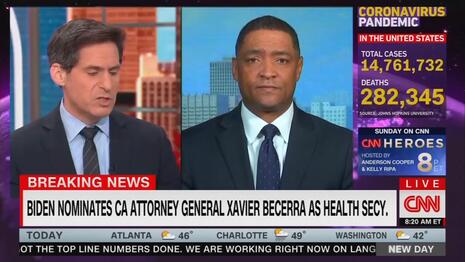 In what has become common practice at CNN, Monday morning’s New Day gave a softball interview to Biden adviser Cedric Richmond, who will be leaving Congress to serve in the upcoming Democratic administration. Rather than ask questions about his own qualifications, or plans for his upcoming role, co-host John Berman allowed Richmond to recite his pre-planned talking points with no opposition.

This was especially true regarding Xavier Becerra, Biden’s pick for Health and Human Services Secretary: “Typically, a doctor does not hold that role. That is a large agency that deals with so many things…here we need Xavier's unique expertise, [fighting for] all of the things that are part of President-Elect Joe Biden's agenda that fall under HHS.”

Despite Berman’s dereliction of duty, Richmond did talk about Becerra’s qualifications for the role: “He comes from the second largest Department of Justice in the country behind the U.S. Department of Justice, and he spent 20 years in the United States Congress on the Ways and Means Committee.” There were no questions about how this experience relates to the HHS department, despite being in the middle of a pandemic.

Over the past month since Biden started picking Cabinet positions, the partisan network has been reluctant to give any substantial discussion to Biden’s cabinet’s picks. For example, not once during this interview or the rest of New Day did Berman bring up Becerra’s extreme position on abortion, once so radical he has even been criticized by progressives in his party.

There was also no discussion of how Republican Senators have already come out against this pick because of him being radically pro-abortion.

The only time that Berman showed a hint of criticism of Biden’s picks regarded the lack of diversity: “There are still a number of cabinet officials to be named, to be nominated. You know that members of the African-American community have, some have been disappointed. …What is the likelihood an African-American will be nominated to fill one of those roles?”

Of course, Berman did not even challenge when Richmond just gave the typical line: “Joe Biden is going to deliver on his commitment to have a historic cabinet.”

CNN should have given a substantive interview, giving the American people information about the future leaders of their government. Instead, viewers were treated to DNC talking points and liberal praise. Not the kind of thing that should be seen from a “news network.”

This CNN bias was sponsored by ADT Security Services and Liberty Mutual. Click on the links to let them know what you think.

A transcript of the December 7th Coverage is included below:

JOHN BERMAN: Breaking this morning President-Elect Joe Biden announcing the members of his health team that will help his administration battle the coronavirus pandemic. He will nominate Xavier Becerra to be the Secretary of Health and Human Services, Dr. Vivek Murthy to be U.S. Surgeon General and Dr. Rochelle Walensky to be Director of the Centers for Disease control. Joining me is Democratic Congressman Cedric Richmond, he is to be senior adviser to the new President and Director of the White House Office of Public Engagement, Congressman, thank you for being with us. We just talked to Dr. Fauci who heaped praise on all these selections. I should ask though, Xavier Becerra to be Secretary of Health and Human Services. There are some people call for a doctor or position or scientist to hold that role. What is the thinking

CEDRIC RICHMOND [D-LA]: Well, I’ll tell ya. Typically, a doctor does not hold that role. That is a large agency that deals with so many things and so we have a Surgeon General. We have a bunch of medical professionals all over the administration but here we need Xavier's unique expertise, that is fighting for the Affordable Care Act, fighting for fenceline communities and environmental justice, all of the things that are part of President-Elect Joe Biden's agenda that fall under HHS. We needed someone with a lot of experience managing a large department and he comes from the second largest Department of Justice in the country behind the U.S. Department of Justice, and he spent 20 years in the United States Congress on the ways and means committee that ushered in the Affordable Care Act. His experience is unique, and I think his life experiences, which we don't talk about enough as a minority is going to be very important in HHS as we tackle health disparities across the country. So, I think it's a phenomenal pick and what President-Elect Biden said he would do.

BERMAN: Can I ask you a question about your current colleagues. "The Washington Post" reached out to all 249 Republicans in the House and Senate. Only 27 acknowledged that President-Elect Biden won the election. 37 said they’d accept Joe Biden as the legitimate President after the electoral college votes. Two said no, and the rest declined to answer. What do you think of those numbers there, the unwillingness of Republican members of Congress to step forward and say Joe Biden won?

RICHMOND: I don't and I think the American people should just see it for what it is. It's a party scared of their President, a President who only cares about himself and a Republican party that has been absolutely neutered and the truth is we shouldn't even be talking about that. We should be talking about the 13 million people about to lose unemployment benefits and paid family leave or the eviction moratorium that's about to expire, and so I would hope that those Republican members of congress will focus on the American people. And that's what's so important right now as we head into these holidays. The stress on families is tremendous and one of the reasons why I supported Joe Biden very early is because he cares about other people more than he cares about himself and I think that's what we need.

BERMAN: Talk to me about that stimulus. There this $908 Billion plan put together by a bipartisan group of legislators. President-Elect Joe Biden says he's supportive of that as a first step. How hopeful are you that there will be action on that this week?

RICHMOND: I'm very hopeful. It is desperately needed by the millions of families out there that this pandemic is wreaking havoc on their financial stability. If you look at our food pantries, if you look at unemployment, all of those things, the American people are hurting and that means Congress should act. But it also means when we come in, in January, we have to make another investment into the American people and their futures.

RICHMOND: Well, I'll answer this in my personal capacity as a member of Congress and a member of the judiciary committee. I would say good riddance. He was an embarrassment as an Attorney General. He did the President's bidding, not the people's bidding and the Attorney General of the United States should be independent and justice should rule the day. That's what Joe Biden has committed to in an Attorney General. This Attorney General and the ones under Trump acted more like his personal Attorney and they've damaged justice in America, and the rule of law. So the fact that's leaving does not bother me one bit at all.

BERMAN: Back to your role in the Biden transition. There are still a number of cabinet officials to be named to be nominated. You know that members of the African-American community have, some have been disappointed. Jim Clyburn stated he'd like to see more African-Americans nominated to senior positions in the Biden cabinet. There are a few members of what is called the big four cabinet positions still available, Attorney General, Department of Defense. What is the likelihood an African-American will be nominated to fill one of those roles?

RICHMOND: Look, I’ll go back to the campaign. Joe Biden promised to have the most diverse campaign that he possibly could and he delivered on that. He's promised to have the most diverse cabinet in the history of the United States and so far he's delivered on that, three African-American females in the cabinet already and we've only picked somewhere around ten positions and that's historic. You see Xavier Becerra today. So he’s living up to his promise. But for the Civil Rights community, for my dear friend Jim Clyburn who I eat dinner with every night, they're supposed to push and push and advocate for as much diversity as they can. I'm a lifelong member of the naacp. The fact that the naacp is pushing us is what they're supposed to do and Joe Biden is supposed to do what he's supposed to do, deliver on his promise, put a cabinet together that’s diverse and experienced and ready to lead this country on day one and at end of the day, I am comfortable sitting here with you this morning saying that I believe Joe Biden is going to deliver on his commitment to have a historic cabinet and African-Americans, Hispanic, AAPI, everyone all over in key positions to help lead this country out of this disaster.

BERMAN: Congressman Cedric Richmond, we look forward to speaking to your new role as part of the Biden White House.