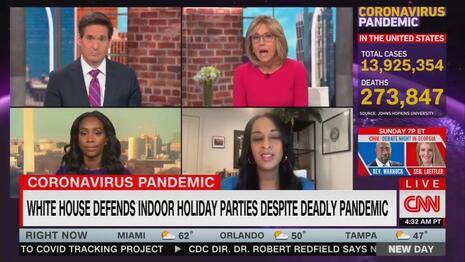 Despite everything the media has done to smear President Trump, Thursday morning’s New Day showcased that it would not be enough until he has left office. In fact, for the past few weeks, the partisan CNN has blatantly longed for Joe Biden to take office already. That was the feel co-hosts Alisyn Camerota and John Berman gave during the broadcast, with attacks on the Trump Christmas party, worry about the last few weeks of his administration, and hope for the Biden administration.

Whether it is taking the President out of context, or trashing him for having two scoops of ice cream, CNN has never shied from denouncing the President whenever they can. So it is no surprise that they are now on the offensive over Trump’s planned Christmas parties. Camerota did not even try to hide her feelings when she complained: “This is what they're planning. It's beyond -- it's -- it's sick. I mean, it's sick that they're now exposing their friends in this reckless way to this.”

Fellow journalist Natasha Alford, who was a guest on the program agreed with the host: “It's a slap in the face to all Americans. …But I think it also reflects that from the very beginning of this pandemic, we have been getting mixed messages and that only extended this endless year.”

Alford was likewise dismissive of Press Secretary Kayleigh McEnany’s response to the parties, this outlet was okay with the riots and protests, but not with big Trump events. She responded: “I'm just thinking about the fact that, you know, the press secretary defends this holiday party by taking a dig at black lives matter activists. Two very different things and again a total lack of leadership.”

Soon after the attacks on the Trump Christmas parties, Berman wildly speculated on the “dangers” of Trump’s last few weeks in office: “it strikes me, there are 50-plus days left, so how concerned should people be that there are 50 days left where the President has nuclear codes, while he's literally trying to undermine democracy, overturn the election, and hold super spreader events at the White House.”

Contrast this to how Camerota asked about the incoming administration: “…just thinking about what President-Elect Joe Biden has to contend with, when he gets this brass ring that he's wanted his whole life of the presidency, and now he has this horrible pandemic, this economic devastation.”

CNN once again abandoned its journalistic principles in favor of promoting their own opinions.

This CNN bias was sponsored by Lincoln and Amazon. Click on the links to let them know what you think.

A transcript of the December 3rd Coverage is included below:

JOHN BERMAN: The United States just set a record for coronavirus deaths reported in one day. More deaths reported here in one day, 3,157 than Japan has registered the entire pandemic. And I keep repeating this, because it's outrageous and infuriating. And while it's happening, the President, what is he doing? He's trying to overturn the election in public, literally trying to undermine democracy. Joining us now, CNN political correspondent, Abby Phillip. Also with us, Natasha Allford, Vice President of digital content and correspondent for Grio. And Abby, it's not just the President in this completely deranged, detached from reality 45-minute string of lies he posted on Facebook. And it’s not just the President is doing it and Alisyn pointed out his lawyers are saying these outrageous things in Georgia. And then there's Michael Flynn, National Security Adviser, former, that he just pardoned, is out there publicizing this claim and this entire and this push for martial law. Michael Flynn is putting this out on Twitter, calling for martial law, so there can be a revote here. It's just unbelievable that we're seeing this from the President of the United States. Your view?

ABBY PHILLIP [CNN Political Correspondent]: Unbelievable, unhinged. All of this is really an embarrassment to the President and it makes you wonder why he doesn't have more people around him who are at least attempting to protect him from this kind of thing. Who sat around at the White House and said, yes, Mr. President, 46 minutes in the White House, you know, in your official, your official offices about this kind of nonsense, with these charts that he claimed to show statistical anomalies, which I'm pretty sure people in the White House have no idea what that even is supposed to mean. This is beyond the point at which, you know, I think it's -- you know, it's beyond any kind of reasonable action on the White House's part. And I think it's time now for people to come to the President and be clear about the fact that he has to stop doing this. If only for their own political survival. They've got to get voters out in Georgia on January 5th. And those voters are getting all kinds of crazy mixed messages from people like Sidney Powell and then the President will go this weekend and urge them to get out and vote. Who are they supposed to believe?

ALISYN CAMEROTA: And by the way Natasha, the gift you get for being an ardent President Trump supporter or friend is a super spreader event at the White House. They're planning all sorts of Christmas parties. Your parting gift will be exposure, possibly, to coronavirus, as Chris Christie had from a different super spreader event. And spent time in the hospital. As Herman Cain had from a rally and died. This is what they're planning. It's beyond -- it's -- it's sick. I mean, it's sick that they're now exposing their friends in this reckless way to this.

NATASHA ALFORD [VP, Digital Content and Sr. Correspondent, theGrio]: It's a slap in the face to all Americans. I'm thinking about more than 274,000 Americans who have died. We have people who have family members who are fighting for their lives right now in the hospital. We have Americans who made sacrifices, this Thanksgiving, who didn't see family, who missed these precious moments. And from the top down, we're not getting leadership on this. It's completely embarrassing. But I think it also reflects that from the very beginning of this pandemic, we have been getting mixed messages and that only extended this endless year. You know, the pain that we've gone through, because people were confused about what to do. And, you know, the fact that Mike Pompeo has any role in this, I mean, this is the same person who joked about a second Trump term. He's just a joke when you think about the fact that he is even a part of all of this happening. And we know that the guest list reaches the hundreds. We've been told that people will social distance. We all know what happens at a party, people will be hugging and kissing. So, yes, another super spreader event. But people are exercising their freedom of choice and putting themselves in these situations. I'm just thinking about the fact that, you know, the press secretary defends this holiday party by taking a dig at black lives matter activists. Saying, you know, well, if you can loot a store or burn down a building, then we can have a holiday party. Well, you know, that's a misrepresentation of the actual black lives matter protesters. And they're fighting for the end of the murder of black people, not to you know, have champagne and dip fondue. Two very different things and again a total lack of leadership.

BERMAN: Abby, it strikes me, there are 50-plus days left, so how concerned should people be that there are 50 days left where the President has nuclear codes, while he's literally trying to undermine democracy, overturn the election, and hold super spreader events at the White House. You say someone needs to go talk to him. Who? Who at this point?

PHILLIP: Look, I think it seems pretty clear that White House aides have taken a step back. They are not engaged in trying to convince the President one way or another. And even if they were, the President is going to listen to who he wants to listen to. And you have people like the press secretary, Kayleigh McEnany, auditioning for her post-White House job by appearing on cable news every night to spout this kind of nonsense. It doesn't make any sense, but it seems like people within the White House are already planning for the future. I've already said that I think that people really do need to be prepared for this transition to be very tumultuous. And that means, because the President is going to be trying to do as much as he can in the limited amount of time that he can. It's going to be pardons; it's going to be a lot of executive activity at the agency level. And it's going to be a lot of wild allegations from the President's own mouth and Twitter feed. So that is not going to slow down. I do think, also, that, you know, we've already seen the ways in which, you know, the President is going to try to do what he can do in the last few days of his administration. But the thing about executive actions is that once there is a new President, some of this stuff can actually be undone. So there might be a sort of limited timeline for some of these activities, even if the President tries to do some extreme things in the next 50 days.

CAMEROTA: Natasha, just thinking about what President-Elect Joe Biden has to contend with, when he gets this brass ring that he's wanted his whole life of the presidency, and now he has this horrible pandemic, this economic devastation. And trying to -- I mean, he's already signaling, undo some of the things that President Trump has done. And so, you know, where are we with that? And his cabinet picks have already gotten some criticism, I guess, some people think that it's maybe not diverse enough. It's hard to know how much stock to put in that, while all of this other deadly stuff is happening.

ALFORD: Yes, I think President-Elect Joe Biden has been handed a tall order. And fortunately, he's in good company, right? President Barack Obama was also handed a terrible situation and many people think in part that's part of why he was able to win. The moment called for his leadership at the time. And so the moment calls right now for a leadership who can rise above the drama, rise above the chaos, communicate really clearly to the American people what they need to do to save lives, reduce harm, and you know, just generally focus on what's best for the American people. I think, as we've pointed out, President Trump's actions are very self-centered. You know, the virus is raging and he's more focused on, you know, proving that the election was stolen from him. And we know he's going down to Georgia and he's supposed to be advocating for Loeffler and Perdue, but in many ways, this is about himself. This is about 2024, which he just, you know, at another holiday party said that he was going to come back. So, I think this says a lot about what we've had over the past four years and what we're going to see afterwards, but President-Elect Joe Biden and Vice President-Elect Kamala Harris have to keep their eyes on the prize and help the American people to move forward, even as we have this flailing President who wants all the attention on him.