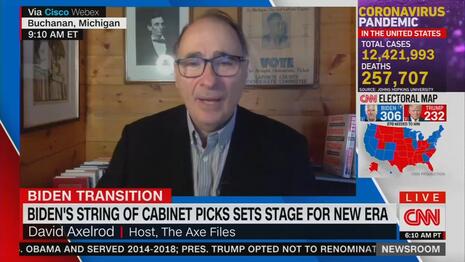 Information. At its most basic core, information is what any news organization should be focused on providing to its audience. Instead, we've gotten nothing but praise over Joe Biden’s cabinet picks instead of actual analysis from our so-called nonpartisan and pro-facts news media.

On Tuesday morning, CNN Newsroom decided to accomplish the less-than-serious path with help from none other than former Obama administration aide-turned-CNN senior political commentator David Axelrod to declare: “Biden picked a group that reflected his world view and there is a lot of repair work to be done.”

"Repair work?" Says who? It is common knowledge that the partisan media hated Donald Trump and did everything they could to ensure Joe Biden won the election. Now instead of remaining the “lions” that went after Trump, they have become “kittens.”

Four years ago, CNN and the DNC-aligned media summarily dismissed Trump’s incoming cabinet as divisive, “a really old white group,” and pondered over them needing training wheels. They grilled each of the picks trying to find if they were qualified or not. Now that their candidate will be the one taking over the White House, his picks won't fetch anything close to scrutiny.

Compare and contrast this to comments made Tuesday morning, such as this one when co-host Poppy Harlow opined: “Yes, some are pointing to this is this Obama 2.0. I would be remiss not to note how history making those names and positions are.”

“I think we shouldn't lose in Mayorkas the new DHS secretary is a Cuban-American immigrant, also historic and symbolically important, but we shouldn't love in the historic nature of these picks the fact that as a group they're very coherent, they reflect Biden's governing philosophy and they are manifestly experienced and competent.”

Where's the adversarial digging into their past? And where are the assertions about someone being unqualified? Where is the combing through public appearance for past opinions and sound bites? Where is the information the public should know about the men and women who are going to be leading the government in a few months?

The only time that any discussion or push back was had was when Harlow questioned whether the ideological diversity: “[Sanders] said it would be enormously insulting if Biden puts together a team of rivals which might include Republicans and conservative Democrats but ignore the Progressive community.”

The current signs point to the media not keeping up the pressure they put on Trump on the incoming President. Already, they have ignored past employment of Biden’s picks that don't fit their narratives and insisted Biden's team won't be political. What else will the media hide?

The country would be better served by the media not letting its bias completely control its analysis.

This CNN bias was sponsored by Dell Technology and Car Shield. Click on the links to let them know what you think.

A transcript of the November 24th Coverage is included below:

POPPY HARLOW: Let's talk more about all the headlines this morning, we're thrilled to have CNN Senior Political Commentator David Axelrod on. Axe, I hope you've gotten some rest since the election and thank you for getting up.

DAVID AXELROD [CNN Senior Political Commentator]: So is the election over? I don't know.

HARLOW: Yeah, right. At least you're 24 hours a day on cable television are over for a little bit. We’ll give you a little bit of rest. I'd like to start on the historic nature of some of Joe Biden the President-Elect's picks. When you look at Avril Haines the first woman to lead the Intel community, Alejandro Mayorkas, the first Latino to head DHS, notable given the moves of DHS under this administration. Janet Yellen, first woman to be Treasury Secretary. Yes, some are pointing to this is this Obama 2.0. I would be remiss not to note how history making those names and positions are.

AXELROD: Absolutely. Look, Biden is following through on the pledge that he made as a candidate. He promised the most diverse cabinet in history, he's delivering that. Janet Yellen the first Treasury Secretary of the United States in the history of the Republic.

AXLEROD: You know, Avril Haines over as the DNI, that's historic. As well. But I think we shouldn't lose in Mayorkas the new DHS secretary is a Cuban-American immigrant, also historic and symbolically important, but we shouldn't love in the historic nature of these picks the fact that as a group they're very coherent, they reflect Biden's governing philosophy and they are manifestly experienced and component. And in that sense distinct from some of the appointments that we've seen under the current administration, in terms of the coherence, you know, as a group on the national security side they favor robust diplomacy, they believe in strong alliances. This is a big shift in our foreign policy, it's one that Biden has fore shadowed throughout his campaign.

AXELROD: On the economic side Yellen broadly respected, also has emphasized what Biden did, a focus on jobs and wages and not just controlling inflation, which is not the problem right now.

AXELROD: So it's very much in line with what he promised. He's delivering on the things that he said he would.

SCIUTTO: David, is the outgoing President's hold over the Republican party going forward guaranteed? I wonder just to play devil's advocate for a moment because the fact is a majority of the country saw through him at the end of the day, right? In fact, he underperformed the Republicans in this election, he is about to lose by more than 6 million votes in the popular vote. Is it guaranteed or is there going to be a battle under way for the heart and soul and leadership of the Republican party going forward?

AXELROD: I think there will be a battle, but he starts off with the upper hand, Jim. You're right that he lost. He also got 74 million votes which is the second most votes any candidate for President has ever gotten and, you know, there was a poll this morning, morning consult had a poll that said 52% of Republicans favored him to be the nominee again in 2024, which I'm sure was music to his ears in a season of bad news for him. And so I think he's going to continue to be there in a way that we haven't seen former Presidents -- and that's going to be troubling not just for Republicans who want a change of direction but for Biden because I think Trump is going to move his show down the street and try to lead the resistance from News Max or wherever -- wherever he hangs his hat and that is going to create more turmoil for the country and within the Republican party and ultimately for Biden as well.

HARLOW: That's for sure. David, I wonder what you think about Bernie Sanders, he was talking to the Associated Press a few days ago about what the Biden cabinet might look like. I should note this is before some of the pics we have gotten in the last 48 hours. He said it would be enormously insulting if Biden puts together a team of rivals which might include Republicans and conservative Democrats but ignore the Progressive community. That would be very, very unfortunate. Noting that Janet Yellen is a pretty Progressive pick, you do have more centrists like Avril Haines, et cetera. I wonder what your reaction is to that given in your White House President Obama enjoyed like Lincoln a team of rivals.

AXELROD: Well, first of all, I think Senator Sanders is probably referring mostly to the economic picks. You point out Janet Yellen. I was interested to see that her appointment met with favor both on Wall Street and from Elizabeth Warren, which is quite a trick in today's politics.

AXELROD: But on the national security side, you know, I think that, again, Biden picked a group that reflected his world view and there is a lot of repair work to be done, repairs in terms of our alliances in the world and also within the diplomatic corps, the intelligence community. The fact that he picked people who had deep roots in those communities, Linda Thomas-Greenfield, the new U.N. Ambassador, 35 years on the foreign service.