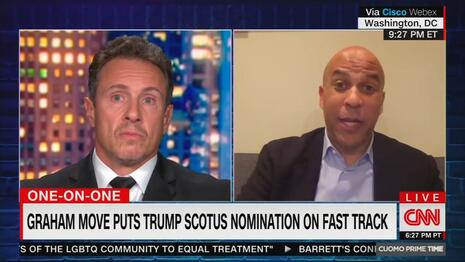 Over the past week, there has been a controversy over the fact that Joe Biden and his campaign will not answer a simple question - whether or not he will support partisan court packing, where seats are added to the Supreme Court to ensure a left-wing majority.

Over the weekend, Biden said that voters would know his stance on court packing after the election. His vice presidential nominee Kamala Harris was asked several times during last Wednesday’s debate and she refused to answer the question. During Monday night’s Cuomo Prime Time, Chris Cuomo openly worried: “I think it is hurting Biden … I think it's hurting Biden.”

Booker gave the same non-answer that Biden had given on the issue: “I'm open to winning. I'm focused on winning. I'm tired of my party, Democrats, jumping to debates that are really moot right now.”

If only Cuomo was doing it for the right reasons. As he openly said he was asking because he was worried that the lack of an answer was not hurting Biden. Cuomo declared “Look one more beat on this, which is they trust him because he's straight with them. This issue matters. If he won't give an answer, if Harris won't give an answer, are they being straight with the American people?”

Contrary to this debate, this is an issue that matters. It was was raised after progressive members of the Democratic Party discussed packing the court with liberal justices to offset the potential 6-3 conservative majority. Given the ramification that would have both if it happened and the future, Joe Biden should give an answer.

It is good to see Cuomo doing his job as a reporter, even if it was for the wrong reasons.

This CNN bias was sponsored by Facebook and Liberty Mutual. Click on the links to let them know what you think.

CHRIS CUOMO: Not a single Senator has gotten to ask the Trump nominee for the Supreme Court a question. And the chairman of the committee, Lindsey graham, senator of course, has already set a date for the vote. And he refused to let the members of the committee take a covid test before starting the hearing. Think about how crazy the second part is. Look, we know they're going to jump the process. So that's just impolite. But can you believe, no, no testing. We don't need to know. Really? Let's get some insight from New Jersey senator Cory Booker who was in the room with Judge Barrett on day one. Thank you for joining us on "Prime time".

CORY BOOKER [D-NJ]: Thank you for having me. It's good to be on.

CUOMO: Will you give me a yes/no on whether or not your party if you get control of the Senate should consider packing the court?

BOOKER: I have learned a long time ago not to speak for my party and you and I both know I think that's luring us into a false debate. We have to win the Senate back. We have to win the presidency. We have to win enough senate seats because clearly there is going to be a divergent of opinion on it. We are so far away from that hypothetical.

CUOMO: So you don't have any personal opinion on it, Senator? Forget about the party.

BOOKER: So, yeah. I have a lot of personal opinion. I'm looking forward to a lot of vibrant debates about it, about D.C. statehood.

CUOMO: Are you open to that discussion?

BOOKER: I'm open to winning. I'm focused on winning. I'm tired of my party, Democrats, jumping to debates that are really moot right now. What everybody should be focused on is getting people out to vote and winning an election.

CUOMO: I think it is hurting Biden. That's why I ask you, Senator. I think it's hurting Biden. I think when he was asked would you consider it, Kamala Harris asked, we don't want to talk about it. Why? Doesn't he need a better answer than that about what's going on here? I mean, I could think of two or three answers that are better than that one just off the top of my head. Is, “I'm not going to answer it.” good enough if you want to get people's votes and that issue matters?

BOOKER: Well, your job is that. My job is a Democratic senator who is up for re-election. I'm focusing on what's important. And I’ll tell you this. This you do know, Chris. You shouldn’t shit all over the leader of your party. He's doing a great job. He's campaigning incredibly hard, and he is earning people's trust. They trust him more than the guy in the office right now. So far be it for me to shit all over him. I’m simply going to get out there and work for him, work to take back the Senate, work to send Mitch McConnell into the minority.

CUOMO: Did you just say you shouldn't should all over your candidate? Is that what you just said?

CUOMO: I wanted to make sure I had that. Because you are one of the cleanest guys I know. I want to make sure on this show you never really know. Could have gone a different way. Thank you. I just wanted to clarify that.

BOOKER: You might have saved me from getting a call from my mom.

BOOKER: I just want to tell you right now, Chris, and you know this. This is a legislative move. He's running to be President of the United States. And, again, I think it's a distraction. Right now what I want for my President, tell me how you are going to deal with saving and expanding the Affordable Care Act. Tell me how you are going to protect people in the midst of the pandemic.

CUOMO: What if his answer is by expanding the court to make up for the fact they are a 6-3 advantage?