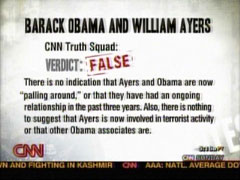 Obama’s unbreakable friendship with the unrepentant, America hating terrorist William Ayers of the Weather Underground is probably one of the most important things America needs to know about Barack before voting day. The media have done well in pretending this is not an issue, and acting as if this does not bring serious questions about Obama’s judgement. The media want this controversial relationship to be swept under the rug.

Vice Presidential candidate, Sarah Palin, finally played the Ayers card. CNN were quick to the defense in what they had the gall to call a “fact check”.

Verdict: False. There is no indication that Ayers and Obama are now “palling around,” or that they have had an ongoing relationship in the past three years. Also, there is nothing to suggest that Ayers is now involved in terrorist activity or that other Obama associates are.

Of course CNN ignores the entire point. Obama had a long history and friendshp with Ayers, and still refuses to repudiate this friendship. The point is not whether Ayers is involved in terrorist activity today, but that he remains proud of his past terrorist activities and believes they were not enough. This reflects a character that hates America to its core, and has displayed this hatred on a magazine cover stomping the American flag back in 2001, the same time Obama served on the Woods Fund with him. Obama’s insistence to remain friends with someone of such radical character reflects poorly on Obama’s judgement and his own character. This is the point the media are trying to ignore. Furthermore, their is a long list of radical friends and associates that Obama has and still does keep company with. There is a pattern of repetative poor judgement that exposes bad character the media want ignored.

Meanwhile, despite Ayers posing for a magazine by stomping on the American flag as recent as 2001, ABC have headlined him as a “former radical”. However, Ayers has never renounced his past actions, and has said he wished he would have done more. There is nothing “former” about his radicalism.

Meanwhile, the AP have pulled the race card out in defense, claiming that Palin’s words carry some kind of racial tinge. The facts are out there, but of course the media can’t be bothered with facts when their is an agenda to follow.