Democrats have made it clear throughout 2020 that they don’t like Florida Governor Ron DeSantis, but 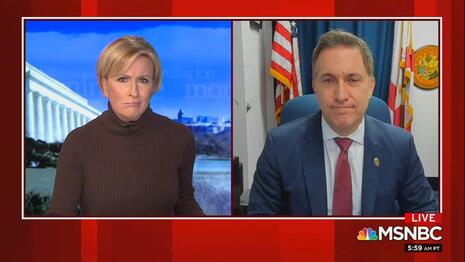 MSNBC’s Mika Brzezinski took things a step further Monday on Morning Joe when she began lobbying for his arrest.

Brzezinski, referring to a South Florida Sun Sentinel report published last Friday, made shocking allegations regarding Gov. DeSantis’ handling of the coronavirus pandemic in Florida, including that he “intentionally engaged in a pattern of spin and concealment that misled the public.” Expressing her disgust, the MSNBC host added: “My God, I mean, what does it take, uh, to be accused of breaking the law at this point? As governor, isn't your job to inform the public and keep them safe?”

Rep. Stephanie Murphy (D-Fla.) essentially agreed with Brzezinski, but didn’t give her any advice for putting DeSantis behind bars. This wasn’t a problem, however, because Palm Beach County State Attorney and Morning Joe regular Dave Aronberg was just waiting to be pulled into the conversation. Brzezinski started throwing out ideas, looking for avenues to prosecute the governor:

Aronberg, being somewhat realistic, told her: “You have to meet a very high burden, Mika. It's not enough just to ignore CDC guidelines. I mean, the Trump administration is doing that all the time, and it's their own guidelines. You’d have to show some real high level of fraud here.” Although he was clearly frustrated with DeSantis as well.

After giving Rep. Murphy a brief chance to bash Republicans in Congress, Brzezinski dismissed her, and once again demonstrated to Aronberg that she didn’t understand due process:

Aronberg, aware that they would need more than last Friday’s issue of the Sun Sentinel for a legal case, once again tried to help the MSNBC host conceptualize the “burden of proof” aspect in criminal proceedings, but it was not clear at the end of the segment whether she understood.

This mock trial was brought to you by Mazda. Tell them what you think by clicking on the link.

Find the transcript below:

MIKA BRZEZINSKI: A concern from Dr. Deborah Birx comes as the Sun Sentinel on Friday published a report on Governor Ron DeSantis' handling of the coronavirus pandemic, and found that he intentionally engaged in a pattern of spin and concealment that misled the public. Based on interviews with more than 50 state employees, doctors and political leaders, as well as 4,000 pages of documents, the Sentinel reports the DeSantis administration refused to reveal details about infections in schools, prisons, hospitals and nursing homes until forced to by legal action. Joining us now, Congresswoman Stephanie Murphy of Florida who was recently appointed Chief Deputy Whip of the House Democratic Party. My God, I mean, what does it take, uh, to be accused of breaking the law at this point? As governor, isn't your job to inform the public and keep them safe?

REP. STEPHANIE MURPHY [D-FLA.]: Well, it's great to be with you this morning. I'm sorry that this is what we're having to talk about. But Governor DeSantis' response to this pandemic has been marked with not only incompetence, but this dangerous misinformation, withholding critical data from the public. He has failed Floridians. And the result is that they are losing their lives and their livelihoods. I worked at the Department of Defense on pandemics, um, back in the early 2000s, and I know that the path out of a pandemic is through science and medicine. And for him to suppress the data that is so needed to make good decisions, whether that is about sending your kids to schools, or what you can do, how safe it is for you to engage, um, in commerce and other things, all of that information is dependent on the data that this governor is withholding from Floridians. Um, it is—it is negligent. And it is costing people their lives.

DAVE ARONBERG [STATE ATTY, PALM BEACH CO., FLA.]: You have to meet a very high burden, Mika. It's not enough just to ignore CDC guidelines. I mean, the Trump administration is doing that all the time, and it's their own guidelines. You’d have to show some real high level of fraud here. Um, this is nothing new to the State of Florida, because Rebecca Jones, the whistleblower, who used to run our state's COVID website, she said that she was told to delete data that would indicate that the state knew about COVID in advance of when they reported it. Plus, she said that she was told to change data that showed that the spread in rural communities was greater than reported. And then there was a case of the medical examiners, where the medical examiners had a higher death toll, but the State of Florida didn't like what they were reporting so ordered the medical examiners to stop reporting their figures. I guess that's the scientific principle that if you close your eyes you can make it all go away. But the most disturbing thing, Mika, about the story in the Sun Sentinel was the report about the 2006 law that the state passed to create an institute of emerging pathogens at the University of Florida. They created a group of experts who come together to deal with situations like this, but the governor has ignored their advice, and instead is relying on Dr. Scott Atlas, the same doctor who has no experience in infectious diseases, and has led our country's COVID response into the ditch. So if you're wondering why a state like Florida, with more than 1 million COVID cases, still is only 1 of 13 states without a mask mandate, now you know why.

BRZEZINSKI: God. Uh, and lawmakers today may not, uh, make today's self-imposed deadline, uh, lawmakers in Washington, for releasing the text of the COVID-19 relief package. And they will definitely not include another $1200 payment to Americans. President-Elect Joe Biden was among those hoping negotiations would produce a second wave of the very popular stipend, but the Associated Press reports, the bill will only provide an extra $300 per month in federal unemployment as direct assistance. Vermont Senator Bernie Sanders said he will oppose any bill that doesn't include the $1200 payment, but progressive Congresswoman Alexandria Ocasio-Cortez she says she remains open to it. Uhh, Congresswoman Murphy, what is it going to take to help people who are suffering, and, um, some of them, you know, have—have no financial legs to stand on now.

MURPHY: You know, for months I've been pushing for a bipartisan COVID relief bill, and I think the Senate proposal has a good framework. It brings both sides back to the negotiating table and they're having real conversations. But that—that's—that is a step forward, although not one that I'm sure the American people feel a lot of hope in because they don't yet see the money in their pockets or the support, um, into law. But—you have—we have to understand, um, that Republicans haven't been serious about negotiating. Their side hasn't even put a b—bill together that is remotely realistic, or that will—has a chance to be, uh—pass the Senate. Look, I think Democrats need to make hard compromises here. We have cold hard months ahead of us, and there's no more time to waste, particularly in Florida, where our state unemployment is disastrously low. Look, we at the federal level have the ability to help the American people today, and we need to think about it as a down payment. We can and should do more to help workers and American businesses get through this winter, and then we can fight for more in the future.

ARONBERG: Mika, uh she has the—Rebecca Jones, who’s the database manager, has, uh, come out publicly, and there’s apparently some whistleblower complaint and civil, uh, litigation out there, but as far as criminal matters, you need to show really a high burden because the governor enjoys a level of sovereign immunity. But unlike the president, the governor is subject to an indictment while he’s in office. There's no DOJ policy that protects state governors from an indictment from a sitting district attorney. It all depends on the facts. And if you're wondering about whether the voters can recall the governor in Florida, we do not have that power. So, really, the main way to change the—who—who leads the state from the top, is at the ballot box in 2022, but it will be well after COVID has passed us, so the governor’s counting on that, so he can wait this crisis out.