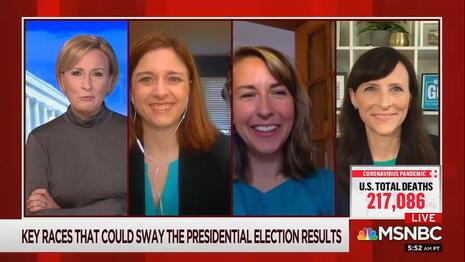 On MSNBC’s Morning Joe on Wednesday, co-host Mika Brzezinski dug up a clip of House Speaker Nancy Pelosi strategizing her next move should President Trump refuse to acknowledge the loss she and her henchmen have planned for him on Election Day. The clip of Pelosi was from September 30th, but Brzezinski decided to revisit the idea and have some guests on the show to discuss their plan of attack.

Brzezinski, committed to helping the cause, invited three liberal women currently running for Congress onto the show, and gave them each a few moments for their campaign pitch. Running to represent districts in Pennsylvania, Michigan, and Florida, all three candidates would make great team players for Pelosi’s post-election scheme.

With everyone on board, Brzezinski brought in an expert: “Longtime media executive and editor-at-large at Newsweek Tom Rogers has been, for months, warning about this very scenario, and has offered a way for Democrats to avoid the election playing out in Trump’s favor this way.”

Rogers, like any well-respected coach, had a detailed plan ready for execution:

[I]f it actually goes this far, under the 12th Amendment, the Democrats have to flip four states. Three of those four states are Florida, Pennsylvania, and Michigan, and you have today three terrific women candidates representing each of those states, Florida, Pennsylvania, and Michigan, and it only takes one congressional seat pick-up in each of those states to flip those state delegations. So these individual races are absolutely crucial if the Democrats are going to have a blue firewall against this Trump challenge. So these races are truly of national significance.

Brzezinski then briefly interviewed each Democrat running for Congress, apparently as nothing more than a litmus test to guarantee their cooperation should they become pawns for Pelosi’s plan B. Although each candidate gave a rehearsed, predictable speech, they all delivered. Brzezinski then wrapped up the hour, saying: “[T]hank you all, and we should mention that we’ve reached out to each of their opponents to offer interviews as well,” however she failed to explain why they didn’t appear on the show.

This dishonest election conspiracy was made possible by Tylenol and Priceline. Click on the links to fight back and tell them what you think.

MIKA BRZEZINSKI: But now, back to an election scenario that we have been talking about here on this show that House Speaker Nancy Pelosi has been mobilizing Democrats for in recent weeks. The possibility that neither Joe Biden nor President Donald Trump will win an outright Electoral College victory, which would result in the House intervening. Speaker Pelosi described it last month right here on Morning Joe.

NANCY PELOSI: One of the possibilities that he would declare victory on election night and say the vote by mail doesn't count, I won by those who voted in person. Secondly, that he would then have some of his allies in states send electoral college folks who say Biden wins the state and it's a Republican legislature and state and they will say we are sending Trump electors. We take that to court. That takes time. Even if you win in court, it takes time, and if you don't have the Electoral College number, the majority by a certain date, the Constitution says the House shall choose. The House of Representatives voting by state. So he has 26 votes. We have 22. Two are even. So it's important for us to make sure, as the constitution says, nobody has a majority in the house, because it's very clear the winner is the person with a majority in the house. So we just have to take him down one vote. We'd rather have the 26 ourselves, but we just have to take him down one vote.

BRZEZINSKI: Longtime media executive and editor-at-large at "Newsweek" Tom Rogers has been, for months, warning about this very scenario, and has offered a way for Democrats to avoid the election playing out in Trump's favor this way. Tom Rogers joins us once again right now along with three congressional candidates in districts that Tom says could determine the presidency. For Pennsylvania’s first, Dr. Christina Finello, for Michigan's third, Hillary Scholten, and for Florida's 16th, Margaret Good. Tom, let’s begin with you, if you could get out the chalkboard so to speak, and explain very clearly how this could play out in Trump's favor, if this scenario were to happen.

TOM ROGERS [CNBC CONTRIBUTOR]: Well, thanks for having me, Mika. Well, first order of business, of course, is to make the vote too big to rig. But Donald Trump has made very clear that they're going to challenge mail-in ballots and very few believe that the new Supreme Court with Judge Barrett on it is going to step in and stop that, and Trump has actually said ultimately Congress will make this decision. And as Speaker Pelosi just laid out, the problem is today if that vote occurred on the current composition of the House, Trump would win that vote 26-22, even though the Democrats have a major majority in the house today. That is a state-by-state delegation where the number of representatives that are Republican versus Democrat in each state determines how that state votes. And as a result, when the new congress convenes, which is the congress that would have this question before them, if it actually goes this far, under the 12th Amendment, the Democrats have to flip four states. Three of those four states are Florida, Pennsylvania, and Michigan, and you have today three terrific women candidates representing each of those states, Florida, Pennsylvania and Michigan, and it only takes one congressional seat pick-up in each of those states to flip those state delegations. So these individual races are absolutely crucial if the Democrats are going to have a blue firewall against this Trump challenge. So these races are truly of national significance.

BRZEZINSKI: So let's pull up the three candidates here. Christina, Hillary and Margaret. No pressure at all, ladies! Dr. Christina Finello, what is your campaign running on and how is it going?

DR. CHRISTINA FINELLO [D-PA]: Great. Thank you so much for having me here today. I'm running in Pennsylvania's first district, which is Bucks and Montgomery County, it’s in the Philadelphia suburbs (…) Our district is right to flip. We are one of three districts that Hillary Clinton won in 2016 that's still held by a Republican incumbent. And momentum's on our side. We just got a poll yesterday that shows us up by a point and Biden’s leading by double digits. So if we want to send a message to end this Trump agenda, we have to flip this district and replace Brian Fitzpatrick with me, Christina Finello. If you want to help us out, go to finelloforcongress.com and help us flip this seat and flip the Pennsylvania delegation.

BRZEZINSKI: Hillary Scholten, how much does coronavirus play a role in what you're talking to voters about and how is your campaign going there? What's your main issue?

HILLARY SCHOLTEN [D-MI]: Thank you so much for having me, Mika. It's a pleasure to be here. You know, the coronavirus is top of everyone's minds, not only the laboring threat of the pandemic but the economic fallout. (…) It is, Kent County, the heart of my district, is considered a real bellwether for this election, and as Tom was mentioning you, it is literally one of the most crucial seats to flip in order to make sure that we can prevent Trump from winning in Michigan again in 2020. It matters deeply to people on the ground, you know? This could be one of the very first votes I cast as a representative for Michigan's third congressional district. So, we're working hard here to win this seat. Anybody who's interested in learning more and getting involved, feel free to check us out at hillaryscholten.com.

BRZEZINSKI: Margaret Good, how is your race going? You're in Florida. Um, as it pertains to the coronavirus, is there an issue with how people are getting their news? I mean, it's hard enough to grapple with your opponent, but are you also struggling with people understanding the facts?

MARGARET GOOD [D-FL]: Well, you know, people want to live in a healthy and a safe and a civil society, and unfortunately that is not where we are right now. People are sick. They're financially insecure. (…) So we are working hard to flip this seat and make sure that we bring accountability to Washington, and Florida, as you know, is one of the most important states. This is Trump's path to, to the re-election, to the White House, and if we stop him in Florida, we stop this chaos, we bring normalcy and decency back to this country.

BRZEZINSKI: Alright, three women looking to flip seats in what could be the most vital districts in the country. Dr. Christina Finello, Hillary Scholten, Margaret Good, thank you all, and we should mention that we've reached out to each of their opponents to offer interviews as well.