AllSides assessed 522 news articles that were featured as one of the top three results in Google’s “Top Stories” section for 10 shooting-related queries over three days. AllSides found that: 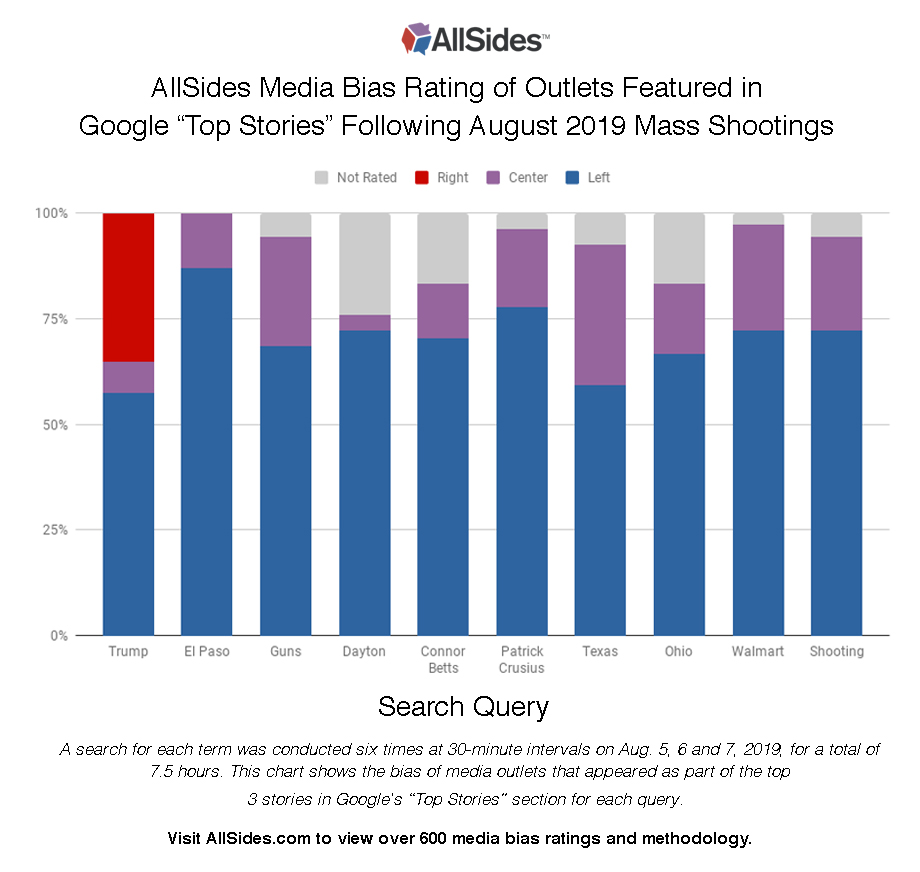 In addition, nearly half (46%) of results came from just three news websites. CNN (25%), the New York Times (14%) and the Washington Post (7%) appeared in the first three results of the “Top Stories” box most often.

Outlets with a Lean Right or Right rating were outpaced by the left 17 to 1, and appeared only for the most general search query, “Trump.” Right outlets made up just 19 out of 522 stories over three days of analysis.

Google’s preference for left media outlets means certain perspectives on the shootings were seen more than others. For example, media outlets on the left tended to emphasize past comments President Trump made, reporting on them as incitements to racist violence. Outlets on the right, on the other hand, urged free speech protection and reported on the Dayton shooter’s support of socialism and Elizabeth Warren.

“This analysis shows no direct evidence that Google is intentionally suppressing voices from the center or right on the shootings,” said John Gable, CEO and co-founder of AllSides, “but there was a clear and overwhelming bias in Google’s results covering these shootings, intentional or not.”

Gable said the bias could be caused by the relative lack of right-leaning online news media as compared to left and left-leaning media overall, or could be an unintended consequence of Google’s complex algorithm.

“It is bad for democracy when diverse perspectives are hard to find,” Gable said. “News media, including digital aggregators, should present all perspectives so that people can decide what they think for themselves. This helps people to appreciate diverse perspectives, creating a more tolerant and better informed public.”