On Monday, CBS This Morning devoted more than 10 minutes to the fallout surrounding Donald Trump’s repeated attacks on Fox News’ Megyn Kelly and what supposed damage it could have on the entire Republican Party.

At the top of the show, co-host Norah O’Donnell declared “Donald Trump causing big headaches for the Republican Party” and reporter Nancy Cordes piled on by citing an unnamed Republican candidate who said “Trump is inflicting permanent damage on the GOP with his comments about woman and about one Fox News anchor in particular.”

After Cordes spent nearly three minutes discussing the blowback from Trump’s attack on Kelly, which included the CBS reporter playing up how “Trump's top opponents said he's hurting the party,” the network then turned to Wall Street Journal columnist and CBS News contributor Peggy Noonan to further wonder how the billionaire might be hurting the GOP. Co-host Charlie Rose introduced Noonan by immediately wondering what she thought “this whole controversy about Donald Trump is doing to the Republican Party?”

For her part, the Wall Street Journal columnist rejected Rose’s premise that Trump’s numerous controversies might cause the GOP:

Noonan went on to condemn Trump’s attack on women but that didn’t stop CBS from continuing to push the liberal line that he is damaging the Republican Party and Norah O'Donnell asked “Do you think there is long lasting damage for the party based on what he said? I mean Jeb Bush finally said this has to stop, you can't insult 53% of the electorate.”

During the 8:00 a.m. hour, CBS brought on Republican strategist and CBS News contributor Frank Luntz to continue the Trump discussion. While most of the interview focused on how long Trump’s candidacy can continue survive given all his problems, O’Donnell made sure to once again attach the billionaire to the rest of the Republican Party:

Now is it incumbent on these other Republicans in the field to sort of distance themselves from Donald Trump and call the comments for what they are?

Throughout the entire Monday morning broadcast, the CBS hosts couldn’t be bothered to discuss any other Republican presidential candidate unless it was in relation to the Trump campaign and his latest disparaging remarks. CBS’s obsession with Trump isn’t surprising given that the “Big Three” (ABC, CBS, NBC) networks have given his campaign significantly more than the other Republican candidates running for president.

An analysis from the Media Research Center’s Rich Noyes found that from January 1 through 31, the network evening newscasts, including weekends, devoted 116 minutes to the Trump campaign whereas his closest competitor, Jeb Bush, received only 72 minutes of coverage.

ORAH O’DONNELL: Donald Trump says “I apologize when I'm wrong, but I haven't been wrong.” The GOP presidential frontrunner is not backing away this morning from some of his controversial comments about Thursday’s debate. Many critics say Trump was crude and sexist. Nancy Cordes is in Washington with the Republican backlash. Nancy good morning.

NANCY CORDES: Good morning. Yeah, things really seemed to take a turn over the weekend. One of his opponents said Trump is inflicting permanent damage on the GOP with his comments about woman and about one Fox News anchor in particular. Trump defended himself in interview after interview and even tried to claim it didn’t happen.

CORDES: In the face of massive blowback, Trump did damage control on four Sunday news programs.

CORDES: Trump was trying to explain why he said this on CNN about Fox News host and GOP debate moderator Megyn Kelly. 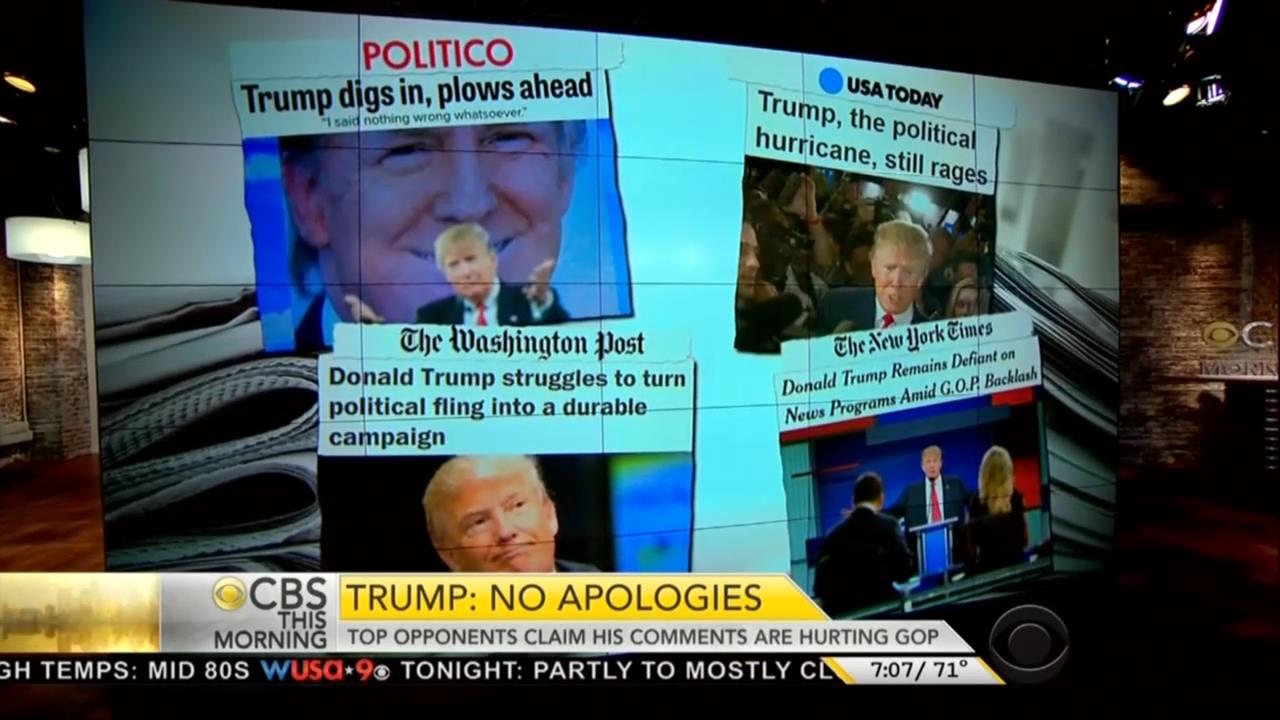 CORDES: He was steamed about a question Kelly asked him in Cleveland last week.

TRUMP: What I say and oftentimes it's fun, it's kidding, we have a good time. What I say is what I say.

CORDES: Afterwards, the real estate mogul unleashed a stream of harsh tweets about Kelly, sharing one comment from someone who called her a bimbo. The tirade prompted his long-time political adviser Roger Stone to resign saying “provocative media fights have overwhelmed your core message. I can no longer remain involved in your campaign.” Trump's top opponents said he's hurting the party.

JEB BUSH: Do we want to win, do we want to insult 53% of all voters? Mr. Trump ought to apologize.

SCOTT WALKER: The kind of rhetoric we’ve heard of late from Mr. Trump just is not appropriate in the presidential election.

CORDES: Carly Fiorina, the only woman in the GOP race, weighed in on "Face the Nation."

CARLY FIORINA: I think women of all kinds are really sort of horrified by this.

CORDES: And Kelly said her questions were meant to probe every candidate's weaknesses.

KELLY: If you can't get past me, how are you going to handle Vladimir Putin?

CORDES: Trump lashed out at several of his detractors, tweeting that Fiorina’s voice gives him a massive headache and calling conservative blogger Erick Erickson a “major sleaze and a buffoon” after Erickson disinvited Trump to his annual Red State conference in Atlanta this weekend Charlie.