The ABC reporter heavily spun for Biden regarding is numerous gaffes as she proclaimed “[h]e's also had his fair share of stumbles. From back rubs to BFD’s. Biden is a gaffemaking machine. But those oh that Joe moments are part of his political charm.”

In her introduction of Bruce, Paula Faris insisted that a potential Biden run “could shake up the Democratic nomination” before she turned to her colleague who continued to promote a Biden candidacy.

After Bruce explained how Biden’s son Beau wanted him to run for president prior to his death, the ABC reporter touted how the vice president is an “experienced campaigner” whose gaffes are part of his “charm”:

But he's also had his fair share of stumbles. From back rubs to BFD’s. Biden is a gaffemaking machine. But those oh that Joe moments are part of his political charm.

One wonders if Bruce would have been as sympathetic towards a Republican who was gaffe prone or would the ABC reporter have suggested that such “stumbles” would disqualify them from seeking the White House rather than being a part of their “political charm.” 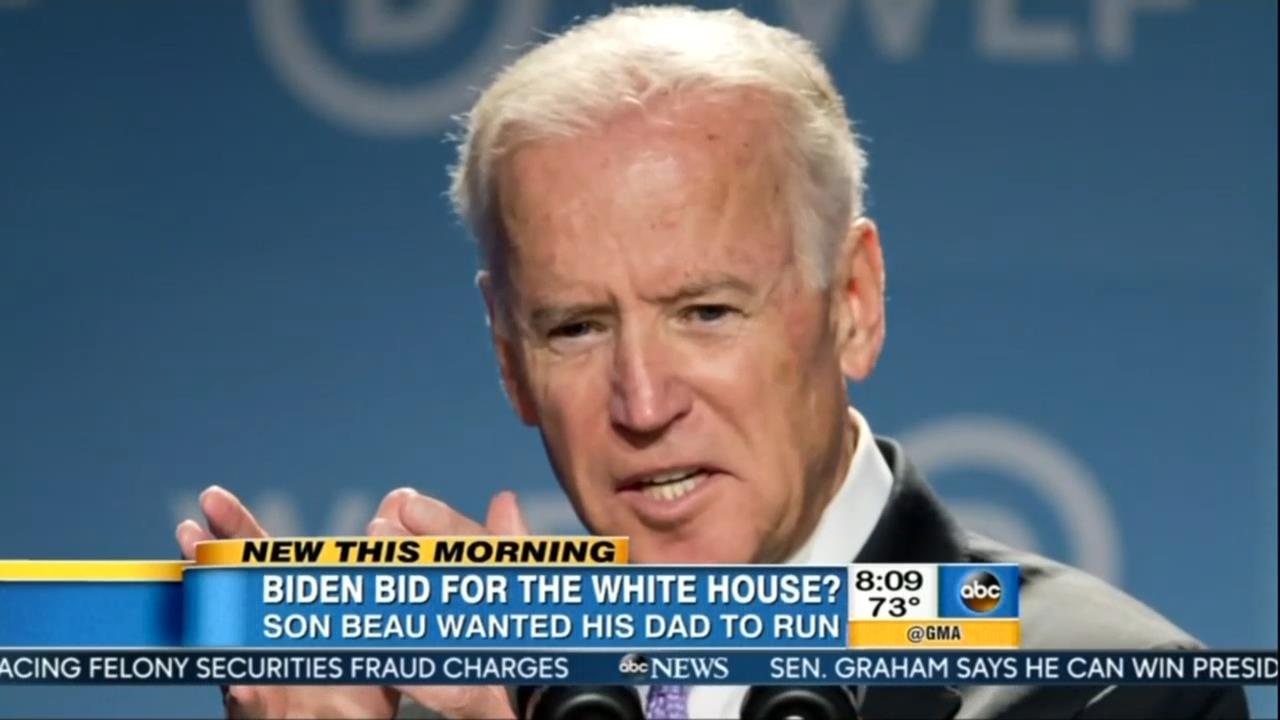 Later in the segment, Dan Harris introduced ABC’s Chief White House Correspondent Jonathan Karl by calling a Biden candidacy an “earthquake in the race for president.” Karl did not go as far as Harris and label a Biden run an “earthquake” for Democrats, but still made sure to promote the potential impact he could have in the race:

But there are clear signs that Hillary Clinton is vulnerable and Biden would be a force in this race from the start. He would undoubtedly be a serious challenger though under the right circumstances could pose a serious threat to Hillary Clinton.

Over on NBC, Meet the Press moderator Chuck Todd provided a much more sober analysis of Biden’s chances if he does decide to challenge Clinton for the Democratic nomination:

Her [Hillary Clinton] problem is with swing voters, independent voters, who are souring on her and right now do view Joe Biden more favorably. The question is are they just viewing him more favorably because they don't like Hillary Clinton but they’d never actually would vote for him? And I think that's something that the Biden people have to answer in order to figure out if it's truly viable for them to win.

PAULA FARIS: And we want to move to the political battlefield now, and news that could shake up the Democratic nomination. Vice President Joe Biden may jump into the ring to fulfill what’s said to be his son’s dying wish. And ABC's Mary Bruce is at the White House, and Mary, this would certainly shake up the race.

MARY BRUCE: Hey, Paula, good morning. Well, nothing has been decided yet, but many have voiced concerns there aren't more candidates on the Democratic side, now it seems the vice president could change that. This morning, Joe Biden isn't saying yes, but he isn't saying no to a possible run at the White House. His political machine is gearing up. ABC News has learned the vice president's chief of staff is quietly talking to Biden supporters, and Democratic donors, clearing the way for a possible presidential campaign. The vice president hasn't indicated yet if he's in or out. But it's no secret that he's interested.

JOE BIDEN: Yes, there's a chance. But I haven’t made my mind up about that.

BRUCE: One thing reportedly weighing heavily on his mind, his son Beau's dying wish. The New York Times reporting that on his death bed, Beau “had a mission.” He tried to make his father promise to run.

BIDEN: So help me God.

BRUCE: Biden is an experienced campaigner. If he runs, it would be his third attempt at the White House. 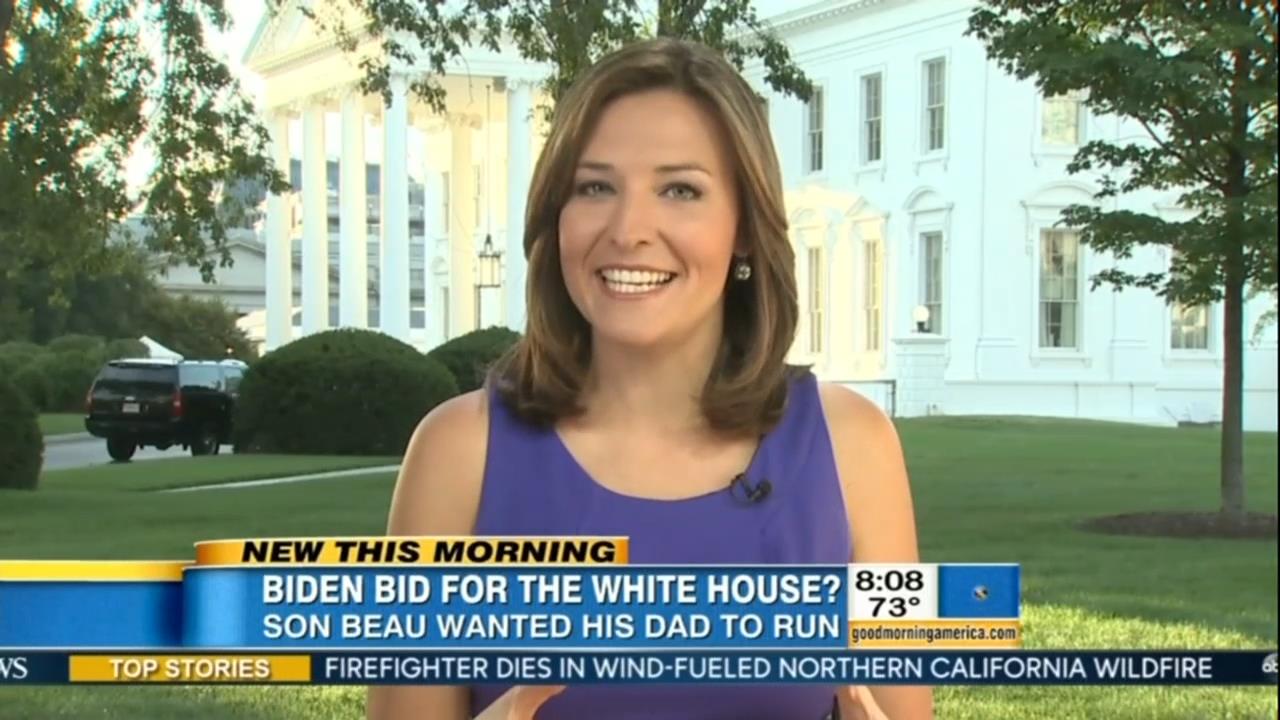 BIDEN: So, give me a break.

BRUCE: But he's also had his fair share of stumbles. Fro,, back rubs to BFD’s. Biden is a gaffemaking machine. But those oh that Joe moments are part of his political charm.

BRUCE: The latest polling shows Biden with his highest favorability rating in seven years, 49%, highest than any other Democrat already in the race. Now Biden has said he will make a decision by the end of the summer. And if he does decides to jump in, politically speaking, that would be a big deal. Dan.

DAN HARRIS: All right, Mary Bruce, thank you. Obviously, this would be an earthquake in the race for president. So let's bring in ABC’s chief white house correspondent Jon Karl, who’s also in Washington, where he’ll be hosting This Week later this morning. Jon, good morning, my friend. How likely is it really, let's get a reality check -- how likely is it really that Biden is going to run?

JONATHAN KARL: Well, I'm told he's seriously looking at this. There are people in his inner circle who are preparing for a possible run. I have talked to several longtime Biden advisers who are divided about how likely it is. But one of them, Dan, told me that he believes that Biden is 90% in.

HARRIS: Wow, that certainly sounds like he's going to do it. But let me ask what the consequences are likely to be. As we know Hillary Clinton has had more time to raise money, and build an organization, how serious a threat would Biden be?

KARL: Well, look, huge obstacle here. You mentioned getting in so late without the organization, without the money. Also you know, Biden has run for president twice, did not do well at all in either of those campaigns.  But there are clear signs that Hillary Clinton is vulnerable and Biden would be a force in this race from the start. He would undoubtedly be a serious challenger though under the right circumstances could pose a serious threat to Hillary Clinton.