Leave it to CBS News to push a liberal talking point as evidence of a national consensus on a highly contentious political issue.  Such was the case on February 5, when CBS This Morning brought on former General Motors CEO Ed Whitacre to push to Obama administration’s decision to help bail out General Motors and Chrysler.

Speaking to Whitacre on Tuesday, co-host Charlie Rose introduced the segment by asserting that, “Everybody assumes this was money well spent by the U.S. government.”  Whitacre, who was brought in by GM in 2009 while the federal government was partial owner, heaped praise on the decision to bail the automaker out:

Did Rose actually expect Whitacre to criticize President Obama’s bailout of G.M.?  Instead, this became an opportunity for Whitacre to prop up Obama’s questionable decision, which as of this date, has still not made a profit for the American taxpayer.

The segment continued with Norah O’Donnell asking Whitacre, “are there lessons in American business that should be applied to government?”  When Whitacre responded that, “the number-one lesson would be revenue should exceed expenses” O’Donnell seemed shocked, because such a principle, in her mind, shouldn’t apply to government and instead asked him for another principle in business, other than that pesky notion of financial solvency.

The segment concluded with co-host Gayle King asking Whitacre, who served as president of the Boy Scouts of America from 1998-2000, about their recent move to consider allowing gay individuals to serve as members and scout leaders.  King tried to press Whitacre to give a definitive opinion, but his only response was:

But today I think -- and I thought then that the Boy Scouts were the best youth organization in America. But things change, things change. 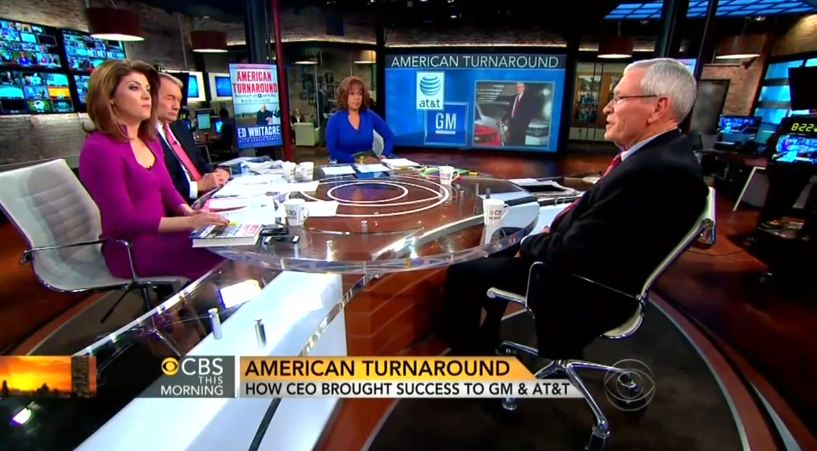 CHARLIE ROSE: Ed Whitacre built AT&T from a group of smaller phone companies into a communications powerhouse. He later came out of retirement to help rescue General Motors. G.M. went from bankruptcy to the biggest initial public offering in the nation's history. He writes about it in "American Turnaround." Ed Whitacre, welcome.

ED WHITACRE: Thank you. It’s nice to be here.

ROSE: Everybody assumes this was money well spent by the U.S. Government. Would you change anything about that deal?

ROSE: When you look at it, did the government in the end lose money, or is it too early to tell?

WHITACRE: Well, I think it's too early to tell. The taxpayer, the government, you and I, recovered a big portion of that in the initial public offering.

WHITACRE: But there's still some outstanding. And remains to be seen how that will work out. But I believe G.M. should pay back every penny that the taxpayer has coming.

ROSE: And when will they do that?

WHITACRE: You'll have to ask them. I'm out of it. But hopefully that will work out.

GAYLE KING: But let's talk about you for a second being out of it. Because you were out of it when you were first approached. You were in retirement and they came and asked you to run the company and you said no. They had to convince you. Why?

WHITACRE: Well, because I knew nothing about a car, Gayle. I mean, I could turn it on.  That was about it. I could drive.

KING: That's my knowledge, too. But what did it take to turn you around?

WHITACRE: You know, I got to thinking, ever since I was a kid, my family owned G.M. cars. It was a great part of America. It did terrific things. And back in World War II, it had been just a fabric -- part of the fabric of America. And I got to thinking if I can do this and if I can help, I'll go do it. It was a public service. My conscience got to me. And I'm glad I did.

NORAH O’DONNELL: Ed for people who don't know you, you also started southwestern bell, you ended up building AT&T with an annual revenue of $120 billion. Extremely successful. Your book is "American Turnaround" about companies. Let me ask you, are there lessons in American business that should be applied to government? There's a lot of people talking about that now. And what would they be?

WHITACRE: Well, there are several, I think. Probably the number-one lesson would be revenue should exceed expenses. You know, that's a true business truism.

O’DONNELL: Well, what's been the key to success, though?

WHITACRE: Well, the true -- the key to success is I think people. I think people are the reason for any success. If you have people involved, people in authority, people with the ability to do it, accountability, and hold them responsible, I think people can do amazing things. And I think we forget that sometimes. It's all about people in the final analysis.

KING: You know, there's a discussion about the Boy Scouts. Should they lift the ban on gay leaders? You ran the Boy Scouts back in the day. What do you think, yes or no?

WHITACRE: That was long ago. But today I think -- and I thought then that the Boy Scouts were the best youth organization in America. But things change, things change.

KING: If you had to say yes or no.