In yet another attempt to inject her liberal bias into a discussion on abortion, NBC News’ Andrea Mitchell insisted that pro-life Americans call themselves "anti-abortion" instead because the latter term is "more value neutral."   Speaking on her MSNBC show Wednesday afternoon with Republican strategist Juleanna Glover, Ms. Mitchell decided that Glover’s self-identification as pro-life was inappropriate.

Mitchell, who consistently brings on abortion activists to rail against conservatives who are pro-life, told Ms. Glover that she is in fact anti-abortion, “To use the term that I think is more value neutral.”  Ms. Glover who called herself deeply pro-life failed to challenge Ms. Mitchell on her categorization of the pro-life movement and instead when on a lengthy diatribe criticizing the Republican Party for many of its pro-life positions.  [See video after jump.  MP3 audio here.]

Would you still agree with the idea of denying funding to Planned Parenthood, because 3% of the work that it does, even though its work predominantly is on women's health issues, 3% is separately funded, privately funded, abortion services?

After allowing Glover to push her belief that the Republican Party should support federal funding for contraception, Ms. Mitchell concluded by smearing more pro-life conservatives:

You know, how do you change the conversation from a Republican perspective so that you don't get into one of these primary debates where you have Rick Santorum frankly pulling some of the other candidates over on this issue and it makes it harder for Mitt Romney as the general election candidate, as the nominee, to get back in the game? 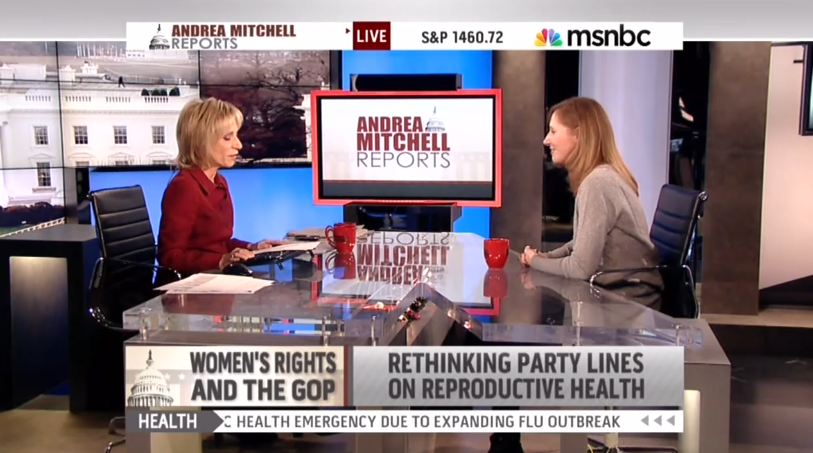 ANDREA MITCHELL: Some veteran Republican politicians and strategists believe that the Republican Party needs to rethink its positions on women's reproductive issues after losing the women's vote once again in the presidential race and losing at least two Senate races over ill-tempered comments from Republican men candidates. Joining me now is Juleanna Glover, a Republican strategist long associated with conservatives like Jesse Helms and John Ashcroft, who has written a provocative New York Times op-ed on how to move the party in a new direction, she hopes. Welcome, good to see you.

JULEANNA GLOVER: Thank you for having me.

MITCHELL: Let’s just establish that you have been very strongly your whole career…

GLOVER: I am deeply pro-life.

MITCHELL: Well I would call, anti-abortion.

MITCHELL: To use the term that I think is more value neutral. And you instead, though, are thinking that Republicans need to be either less aggressive or more open minded about contraception. Why?

GLOVER: Well, first of all, I'm not particularly that far out on a plank on this one. Previous Republican presidents have typically maintained or increased funding for contraceptive services provided by the federal government. The facts are pretty clear. One dollar spent on contraceptive services results in about a $4 to $6 decrease in health care spending for the federal government. So this seems to me to be not only a pro-life issue, it's actually an economic issue for the Republican Party. Also right now you've got 1.2 million abortions in the country right now. Recent studies have shown that if you provide contraceptive services independent of costs or -- in particular, long-acting contraceptive devices and products to women, the likelihood of abortion in their lives dramatically decreases. Typical among women, 20 abortions per population of 1,000. If women are given long-acting contraceptives, they are able to reduce that number down to between four and seven abortions per 1,000. And that, to me, seems to be one of the most pro-life objectives one can possibly ask for.

MITCHELL: Would you still agree with the idea of denying funding to Planned Parenthood, because 3% of the work that it does, even though its work predominantly is on women's health issues, 3% is separately funded, privately funded, abortion services?

MITCHELL: Let me just show you because we did interview Cecile Richards yesterday, this is what she had to say on the subject.

CECILE RICHARDS: Even in the presidential race where we had Mitt Romney, who pledged to not only get rid of planned parenthood, but to overturn roe. We saw the biggest gender gap ever in a presidential election. I think consistently, that’s what we’ve seen, is that women and men in America simply don't want to revisit this. What they do want to do is make sure we're providing women access to birth control, to health care, and that's really of course at Planned Parenthood what we spend our time doing.

MITCHELL: You know, how do you change the conversation from a Republican perspective so that you don't get into one of these primary debates where you have Rick Santorum frankly pulling some of the other candidates over on this issue and it makes it harder for Mitt Romney as the general election candidate, as the nominee, to get back in the game?

GLOVER: Well, my hope is that the Republican Party is, indeed, now at a place, and you'll see leaders stepping forward to talk about this where we're pro contraception. We believe that an adult woman who would like to have contraceptive services should indeed receive them and if the federal government should step in to help ensure that happens, that's a proper role for the federal government to play. Independent limited government concerns as well as personal responsibility concerns, my argument on personal responsibility would be that you have many different antiabortion or pro life organizations out there concerned about increasing contraceptives availability and thereby increasing risky behavior. If a woman is inclined to be remotely interested in at-risk behavior, my hope would be that it would be in not only the government's interest, but the culture's interest that she not become pregnant in that same process. Half of all unplanned pregnancies end in abortion, excuse me, 4 out of 10, and when a woman does get pregnant and she does not have adequate contraceptive care, it's because she doesn't have good insurance, or it’s because she doesn't make enough money to buy her own insurance, or it’s because she’s not poor enough to be on Medicaid.

MITCHELL: You would not deny her federal help to make that possible?

GLOVER: I think it's in the interest of the culture and in a budgetary interest for The United States.

MITCHELL: To be continued. Juleanna Glover thank you very much for coming in.