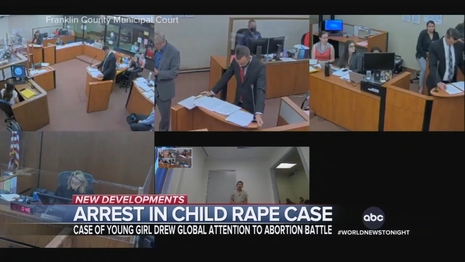 Recall the heat from the media that greeted Donald Trump when, in 2015, he came down that Trump Tower escalator to declare his presidential candidacy and said this? (Bold print supplied.)

The headlines of the day said this was an “outrage” (The Guardian on reaction from “U.S. Latinos”). CNN would later recount the speech and call that specific Trump comment “probably the most notorious thing to emerge from that speech.” The Huff Post said the remark was “outrageous.”

And on and on went the liberal media fury about Trump having the nerve to say that some illegal immigrants who were crossing the US border were rapists.

Recalling the ancient wisdom of being careful what you wish for now comes to mind.

In this case, that old maxim applies with the evolving tale first told by President Biden - the story of a 10 year old Ohio girl being raped and having to travel to Indiana for an abortion because, post-the overturn of Roe v. Wade, she was unable to get an abortion in Ohio. (Which, Ohio authorities say, is completely untrue.) The New York Post, in fact, reports the pro-life Ohio Attorney General has specifically said the girl’s abortion “could be legally performed in Ohio.”

After Biden’s statement, the media went wild, zeroing in on the abortion angle of the story. Controversy centered on whether the story, first reported by the Indianapolis Star, was true or false. All manner of officials in both states could not seem to verify the tale. Finally it emerged that yes, indeed, the story was true, with the girl’s mother verifying the tale.

So the liberal media smirked.

The very validation of the story suddenly caught the media red faced. My NewsBusters colleague Tim Graham noticed this curious moment as well, noting that in the USA Today version of this story, curiously (or not so curiously!), “nowhere in this article was there any focus on his (the admitted rapist’s) immigration status.”

Why the media’s red face or just plain ignoring the latest twist in this story? Here’s the headline from Fox News:

Gerson Fuentes is accused of raping a 10-year-old Ohio girl, who later got an abortion

“The man charged with the rape of a 10-year-old girl in Ohio is a Guatemalan illegal immigrant, an Immigration and Customs Enforcement (ICE) source told Fox News Digital on Wednesday.

The Columbus Dispatch first reported that Gerson Fuentes was arrested after police said he confessed to raping a child on multiple occasions. He has been charged with rape, and the outlet reported that he was possibly in the country illegally.

The source told Fox that Fuentes is a Guatemalan national in the country illegally and that ICE has placed a detainer on Fuentes, which is a request he eventually be handed over to the agency for removal proceedings.”

In the zeal of both President Biden and his liberal media allies to target the repeal of Roe with the story of the 10 year old girl being raped, they are suddenly confronted by the fact that they have accidentally confirmed Trump’s point about some illegals crossing the border and, their background un-vetted, committing rape. Which is exactly what appears to have happened to that 10 year old girl.

As this is written there is yet another twist to this story, as headlined by The Daily Caller.

Say what? The DC reports:

“The mother of the 10-year-old Ohio rape victim who traveled to Indiana for an abortion told Telemundo she had not filed charges against the alleged rapist and claimed the media is lying about him.

Gerson Fuentes, the 27-year-old illegal immigrant charged with raping the young girl, confessed to the crime and was arrested Tuesday, according to The Columbus Dispatch. The victim’s mother defended the alleged rapist to a Telemundo reporter who showed up at her apartment.”

What does this mean? No idea. What it doesn’t mean is that the alleged rapist is a legal immigrant. Again, Fox News quite specifically reports that the alleged rapist, who has admitted to his crimes, is, per ICE, an illegal immigrant from Guatemala, with ICE having “placed a detainer on Fuentes, which is a request he eventually be handed over to the agency for removal proceedings.”

What we have is a president and his liberal media allies going out of their way to score a point in the post-Roe abortion debate - and winding up with egg on their face when the rapist turns out to be a Guatemalan illegal immigrant who had entered the country during the Obama-Biden administration. In fact, he is said to have come across the border seven years ago - in 2015. That being exactly the very year Trump announced his candidacy and said illegals crossing the border and committing rape was a problem.

As said, remembering the ancient wisdom of being careful what you wish for applies here in spades. Put more simply? Before a president and his liberal media allies rush out an abortion story to score a political point, it would help them - and everyone else - if they had all the facts first.

And in this case? One can’t help but suspect that if in fact Joe Biden and his staff knew the full facts about the rapist in question, the President would have never have raised the story in the first place. Just like USA Today’s decision not to mention the admitted rapist and his illegal status, the real story would never have seen the light of day from Biden and his media pals because, to borrow from former Vice President Al Gore, it contains “an inconvenient truth.”