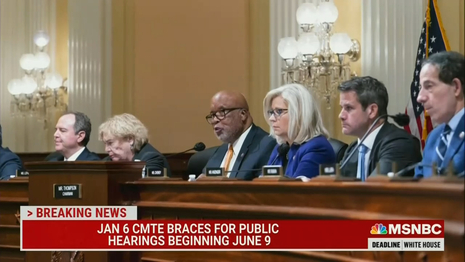 So the week ends with this headline from The Washington Post:

The Jan. 6 committee's decision Thursday to subpoena five House Republican lawmakers sets up a tense and historic showdown over Congress' ability to force its members to participate in one of its own investigations – the outcome of which could have major political and legal ramifications.

…the chair of the committee, Rep. Bennie Thompson (D-Miss.) said the subpoenas were necessary because “several of our colleagues have information relevant to our investigation into the attack on January 6th and the events leading up to it.”

Notice anything curious here? Or should I say curiously missing?

That would be serious media coverage of the January 6 Committee members themselves, what they did or did not do on January 6 and in the run-up to that day, not to mention their role afterwards in the establishment of the Stalin-esque show trial Committee itself.

Note well that the Committee has already issued subpoenas to AT&T, Verizon, Sprint, T-Mobile and any other company that might have the texts, e-mails and phone records of Trump family and staff members, conservative members of the media (think: Sean Hannity and Laura Ingraham.) In fact, predictably, the Committee has leaked the private correspondence of various of these people to, but of course, the media.

Another major preoccupation since the 2001 terrorist attacks and Capitol Hill anthrax attacks has been improving security on the House side of the complex while maintaining a high level of accessibility for citizens. In its role as overseer of House security, the committee has worked closely with the Capitol Police. One of the committee's first challenges was to coordinate resources to secure the campus, facilitate evacuations when necessary, and suggest alternate locations for Congress to meet. Along with providing updated communications equipment to Members and staff, the committee also provided congressional offices with a campus-wide network for the announcement of emergency broadcasts.

Which is to say, Lofgren and Raskin had a direct role in preserving the security of the Capitol on January 6. And the media questioning and investigation of what the two did -- or did not do --  in the days before and after the January 6 attack?

Over there in The Wall Street Journal, columnist Kimberly Strassel has just written on what is, on the surface, a totally different subject than the January 6 Committee. But in writing about the machinations of the Hillary Clinton campaign and the Trump-Russia collusion hoax, she notes the game at work with the now-notorious Fusion GPS consulting firm and British spy Christopher Steele and his now equally infamous “Steele Dossier.” She writes:

Fusion GPS, which hired Mr. Steele, has become toxic in Washington. The Durham prosecutions show how the opposition-research firm operates — not by producing real research, but by shopping seamy claims to law enforcement, then browbeating journalists into covering the “investigations” Fusion inspires.

Catch that? Fusion took the “seamy” Steele “research” and shopped it to law enforcement and “then browbeating journalists into covering the ‘investigations’ Fusion inspires.”

Which in turn raises the obvious question of the January 6 Committee and both its shopping of leaked private correspondence to the media, but also the media’s refusal to investigate the Committee itself.

In a follow-up article on the Committee, the Post headlines this:

Jan. 6 panel’s historic subpoenas to House GOPers — and what’s next

Generally speaking, there are three legal options on the table and a fourth administrative option for the House if the members resist the subpoenas, as expected:

1. Refer members who defy subpoenas to the Justice Department for criminal prosecution.

2. Go to civil court to compel the testimony.

3. Have the sergeant-at-arms arrest and detain the member.

4. Punish the member through fines or by stripping them of committee assignments.

So where are the stories about whether subpoenas should be served, as noted, to the January 6 Committee members and staff ?

Where are the stories on just how those “three legal options…and a fourth administrative option” would be used by the Committee members and staff to resist subpoenas served on themselves?

The second Post story focuses on the usefulness of the fourth option to “Punish the member through fines or by stripping them of committee assignments.”

If, when the GOP takes control and the members of the January 6 Committee resist subpoenas, as McCarthy and the four named GOP Members are now resisting, the Post quotes a piece in Lawfare by University of Chicago law professor Albert W. Alschuler, who says of option four:

Better still would be daily fines, which could escalate for every day or week of noncompliance. One judge doubts that resurrecting the use of Congress’s inherent power to sanction contempt remains a realistic option. He worries that Congress would risk “physical combat with the Executive Branch” by “dispatch[ing] the Sergeant-at-Arms to arrest and imprison an Executive Branch official.” But ordering a contemnor to pay a fine to the sergeant at arms for every day of noncompliance would be unlikely to lead to a shootout.

A House resolution imposing this fine could authorize the sergeant to use all available civil processes to collect it. The contemnor could challenge the legality of Congress’s action by bringing an injunctive action against this officer. She also could take the riskier path of waiting to present her defenses until the House sought recovery of her accumulated fines in a civil lawsuit. If the contemnor refused to pay after a court ordered her to do so, the House could use the same collection procedures other judgment creditors employ — for example, garnishing the contemnor’s wages. Guns, handcuffs and hotel rooms wouldn’t be needed.

Which is to say, if (when?) indignant Committee members resist the sauce-for-the-goose-sauce-for-the-gander treatment coming their way if the GOP wins back control of the House, they could be fined til the cows come home.

Will the media zero in on the conduct of the Committee when that happens? With 24/7 Trump-Russia collusion-style coverage?

But you can be certain that when the January 6 Committee goes public with live hearings in June, as they are currently booked to do, the media will be there to record every last word, facial grimace and harrumph. All of which will be choreographed to fit the larger Democrat plan to stave off the November Red Wave that so many – Democrats included – believe is coming their way.

The problem for the media in all of this?

The American people, thanks in large part to Donald Trump’s repeated calling out of the “fake news media”, are on to the game.

There is one thing the second Post article has gotten exactly correct about what the January 6 Committee can expect if the Red Wave swamps the D.C. Swamp. Said the Post of the mindset of House Republicans: “Turnabout will be fair play.”

The question is: How will that be covered?

My guess: Not well.