Mayorkas, Nina Jankowicz and CREW Stand Up for Fascism 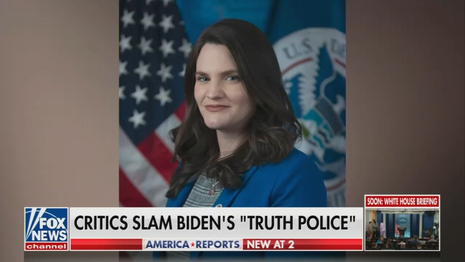 George Orwell’s “Ministry of Truth” has arrived and the Left’s demand for outright fascism steps up.

America’s “Ministry of Truth” was announced this week by Department of Homeland Security Secretary Alejandro Mayorkas. The official title of this Orwellian confection is the “Disinformation Governance Board” and its executive director is one Nina Jankowicz.  During Mayorkas’s testimony Ohio’s Republican Congressman Jim Jordan asked this with reference to Ms. Jankowicz:

Jordan: Is this the same individual who said the Dossier was real and the Hunter Biden laptop story was false? Is that the individual who’s now running the Disinformation Governance Board?

Mayorkas: I’m not familiar with those statements.

Mayorkas: I’m not familiar with those statements.

Americans are waking up to the fact that under the Biden Administration the Government of the United States has now officially established a Ministry of Truth-style “Disinformation Governance Board” to decide what is and what is not “disinformation.” And to run it as the executive director, it has selected Ms. Jankowicz, the self-same Ms. Jankowicz who actively pushed two of the biggest pieces of disinformation in American political history, namely the Steele Dossier and the idea that the Hunter Biden laptop story was false. As Newsweek reported of the latter:

On October 22, 2020, Jankowicz shared an article on Twitter that she described as “casting yet more doubt on the provenance of the NY Post's Hunter Biden story” and said in another tweet that day: “The emails don't need to be altered to be part of an influence campaign. Voters deserve that context, not a [fairy] tale about a laptop repair shop.”

Jankowicz also said of the laptop story that: “We should view it as a Trump campaign product.”

And when it comes to the rough-and-tumble that has accompanied American politics since the presidency of George Washington? Out. Especially if you decide to mock the incumbent Vice President of the United States.You read that right. If you have the nerve - the nerve! - to mock Kamala Harris, the government is coming for you. (But it was OK when the target was Vice President Dan Quayle.)  In the words of Jankowicz, when it comes to social media:

Platforms and governments aren’t doing enough. It’s time to act. Our national security and democracy are at stake.

In this article at Wired Jankowicz headlined this over a photo of Harris:

Curiously, in a very long article about online abuse of prominent women political figures, there is no mention of the name “Sarah Palin.” Hmmm.

Over there at BookAnalysis, a site that does literature reviews, summaries and analysis, there is this decidedly accurate description of Orwell’s “Ministry of Truth” as it appeared in his classic novel 1984:

The Ministry of Truth, like the other three ministries, has an ironic name. It purports to be focused on the pursuit of truth when in fact, the ministry is concerned with erasing the truth of the past and present and replacing it with whatever the Party deems “correct.” Those in charge of the ministry decide what “truth” is.

Clearly, when it came to the Hunter Biden laptop story, Jankowicz dismissed it as “a [fairy] tale about a laptop repair shop.” Which is exactly the way the Orwellian Ministry of Truth operated. Again, the very purpose of the ministry “purports to be focused on the pursuit of truth when in fact, the ministry is concerned with erasing the truth of the past and present and replacing it with whatever the Party deems ‘correct.’”

A more perfect description of what Jankowicz said about the Hunter Biden laptop scandal could not be had. And it is exactly this Orwellian-style erasing of the truth that Jankowicz will bring to the decidedly Orwellian “Disinformation Governance Board.”

Then there was this jewel of fascism revealed over here by NewsBusters own Jeffrey Clark.

Citizens for Responsibility & Ethics in Washington (CREW) urged Apple CEO Tim Cook to ban former President Donald Trump’s social media platform from the Apple App Store in an April 21 letter. The group pocketed at least $2,350,000 from Soros between 2017 to 2020, according to Open Society Foundations records. Truth Social is Trump’s social media platform that launched on Presidents Day as a freer alternative to mainstream platforms like Twitter.

In other words, in the style of fascists throughout history, CREW  is demanding that Apple shut down the Trump site because they are terrified of free speech.

This is an exact description of what CREW, not to mention Jankowicz and the Disinformation Governance Board, is trying to do. So with that in mind they are demanding of Apple that the already seriously popular Trump Truth Social site be removed from the Apple app store.

There is a direct connection between CREW’s fascist demand and headlines like this one over at Breitbart:

Which is to say Americans out there want to exercise their right to freedom by buying Truth Social.

And the response of CREW is to demand that Truth Social be silenced.

So, what’s the take-away from these dual announcements?

The first is the news that there is now a government run Ministry of Truth -- aka the “Disinformation Governance Board” -- run by Jankowicz, someone who has herself specialized in spreading disinformation and is on record demanding fascist-style government censorship of speech she doesn’t like.

The second is the decidedly fascist demand from CREW that Truth Social be removed from Apple’s app store -- deliberately shutting down the freedom of Americans to listen to Truth Social or any other site they wish to listen to because, well, it offends CREW’s political sensibilities.

Make no mistake. These two pieces of news are all about one thing -- power. And in the world of fascists, no one and nothing will be tolerated that diverges from the fascist version of the “truth.”

Just read Nina Jancowicz from the Ministry of Truth.