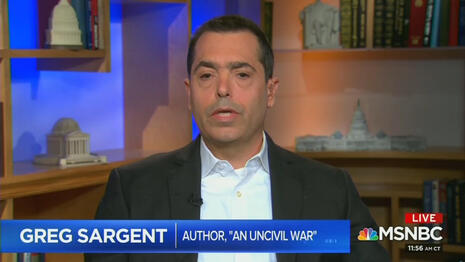 You can’t make it up. Unless, of course, you’re at The Washington Post.

The other day, Post columnist Greg Sargent wrote a column with the title:

In which Sargent writes this of GOP Senate candidates in Pennsylvania, Wisconsin, Ohio and Nevada, bold print for emphasis supplied:

It’s hardly surprising to hear that Republican Senate candidates are campaigning on the “big lie” that the 2020 election was riddled with fraud. This has become so routine that it’s no longer treated as newsworthy, which further normalizes it, a terrible development that we should resist.

But at least four of these candidates have added an even more repulsive twist: In inventing widespread fraud in 2020, they go out of their way to emphasize that it took place primarily in urban centers.

What is it about urban centers that might make this lie attractive to GOP candidates?

Sargent goes on to say this happens because of -- but of course -- race. Then he says this:

Republicans trafficking in this are following a path blazed by Donald Trump. Fake GOP claims of voter fraud to justify voter suppression are an old story, of course. But Trump added his own toxic ingredients to the stew: a more explicit focus on cities, to create a pretext for express efforts to overturn election losses.

He zeroes in on those GOP Senate candidates. But there was one that instantly stood out to me when Sargent said this:

This trend, which Democratic operatives are closely tracking and highlighting, is metastasizing. This week, former hedge funder David McCormick, who’s running for Senate in Pennsylvania, attacked the “lack of oversight in many of the precincts of Philadelphia.”

“The majority of Republican voters in Pennsylvania do not believe in the outcome of the election,” McCormick said, claiming the only way to ensure “an accurate election in 2024” is to elect more Republicans.

Note that McCormick effortlessly glides from claiming the problem is merely that GOP voters “don’t believe” Trump lost to insisting our election outcomes actually are suspect. Thanks to urban centers, naturally.

The only way to fix this problem in urban strongholds, McCormick forthrightly declares, is to elect Republicans to suppress more votes in them — oops, I mean, pursue measures ensuring “election integrity.”

Mr. McCormick is, in fact, 100% factually correct about the problems with voter fraud in Pennsylvania - specifically Philadelphia.  So for the record, let me list a few of those problems, starting with this headline from a Department of Justice press release in May of 2020:

A former Judge of Elections has been convicted for his role in accepting bribes to cast fraudulent ballots and certifying false voting results during the 2014, 2015, and 2016 primary elections in Philadelphia.

Domenick J. Demuro, 73, of Philadelphia, Pennsylvania, pleaded guilty during a sealed proceeding on March 16, 2020, before U.S. District Judge Paul S. Diamond to conspiring to deprive persons of civil rights, and using interstate facilities in aid of bribery. The court unsealed the matter today. Sentencing is scheduled for June 30, 2020.

During his guilty plea hearing, Demuro admitted that while serving as an elected municipal Judge of Elections, he accepted bribes in the form of money and other things of value in exchange for adding ballots to increase the vote totals for certain candidates on the voting machines in his jurisdiction and for certifying tallies of all the ballots, including the fraudulent ballots.  Demuro further admitted that a local political consultant gave him directions and paid him money to add votes for candidates supported by the consultant, including candidates for judicial office whose campaigns actually hired the consultant, and other candidates for various federal, state and local elective offices preferred by that consultant for a variety of reasons.  Demuro also admitted that the votes he added in exchange for payments by the political consultant increased the number of votes fraudulently recorded and tallied for the consultant’s clients and preferred candidates, thereby diluting the ballots cast by actual voters.

Then there was this, also in a press release from DOJ in July of 2020:

That release began this way:

A former U.S. Congressman was charged Tuesday in an indictment unsealed today, with conspiring to violate voting rights by fraudulently stuffing the ballot boxes for specific candidates in the 2014, 2015, and 2016 primary elections, bribery of an election official, falsification of records, voting more than once in federal elections, and obstruction of justice.

Michael “Ozzie” Myers, 77, of Philadelphia, Pennsylvania, is charged with conspiring with and bribing the former Judge of Elections for the 39th Ward, 36th Division, Domenick J. Demuro. Demuro, who pleaded guilty previously in federal court in Philadelphia, was responsible for overseeing the entire election process and all voter activities of his division in accord with federal and state election laws.

Now go back to the 2012 election, and this headline from The Philadelphia Inquirer after the Obama-Romney election:

Which is to say, this is a statistical impossibility and could only have occurred with more ballot box shenanigans.

Go back again, this time to October during the 2008 Obama-McCain election.

I covered an interesting press conference at the Pennsylvania State Capitol that was held by a retired Pennsylvania Supreme Court Justice, the Dauphin County (Harrisburg) District Attorney, and the then-Pennsylvania Republican State Chairman, Robert Gleason. Said Mr. Gleason, with accompanying documents to back him up:

Between March 23rd and October 1st, various groups, including ACORN, submitted over 252,595 registrations to the Philadelphia County Election Board with 57,435 rejected for faulty information. Most of these registrations were submitted by ACORN, and rejected due to fake social security numbers, incorrect dates of birth, clearly fraudulent signatures, addresses that do not exist, and duplicate registrations. In one case, a man was registered to vote more than 15 times since the Primary election.

Voter fraud is no longer just a Philadelphia problem. ACORN was targeting key counties across the state.

But my favorite voter-fraud-in-Pennsylvania-elections story came in this report from 1994 in -- yes indeed -- The New York Times. The headline:

The Times reported this, bold print for emphasis supplied:

Saying Philadelphia's election system had collapsed under ‘a massive scheme’ by Democrats to steal a State Senate election in November, a Federal judge today took the rare step of invalidating the vote and ordered the seat filled by the Republican candidate.

In making such a sweeping move, the judge, Clarence C. Newcomer of Federal District Court here, did for the Republicans what the election had not: enable them to regain control of the State Senate, which they lost two years ago.

Judge Newcomer ruled that the Democratic campaign of William G. Stinson had stolen the election from Bruce S. Marks in North Philadelphia's Second Senatorial District through an elaborate fraud in which hundreds of residents were encouraged to vote by absentee ballot even though they had no legal reason -- like a physical disability or a scheduled trip outside the city -- to do so.

Now. Let’s get back to Post Columnist Sargent saying this:

Note that McCormick effortlessly glides from claiming the problem is merely that GOP voters “don’t believe” Trump lost to insisting our election outcomes actually are suspect. Thanks to urban centers, naturally.

Hello? Earth to Mr. Sargent? The reason Mr. McCormick is “insisting our election outcomes actually are suspect. Thanks to urban centers, naturally” is because, yes, in documented fact, in one election cycle after another in Pennsylvania, this has been true. People have been indicted and convicted for monkeying around with not one, not two, but three different elections. With a federal judge overturning another, quite separate, State Senate election in Philadelphia because of what the judge said was ‘a massive scheme’ by Democrats to steal a State Senate election”, adding that the campaign of the Democratic candidate had “stolen the election…through an elaborate fraud.”

The very fact that a Washington Post columnist would attempt to fool readers into believing none of this happened and that, whether its Donald Trump or Dave McCormick or any other Pennsylvania candidate raising the issue, they do it because of race and not the factual reality of Pennsylvania political history is exactly an illustration of why conservatives simply don’t trust The Washington Post.

Printing the fairy tale that there is no voter fraud in Pennsylvania will not make it true.