Breaking News and the Collapse of Media Trust

Over here in NewsBusters, my colleague Tim Graham has taken note of a story at Hot Air on a report on trust in the media. The report is discussed by Rick Edmonds of the Poynter Institute. Tim quotes it thusly:

“The United States ranks last in media trust — at 29% — among 92,000 news consumers surveyed in 46 countries, a report released Wednesday found. That’s worse than Poland, worse than the Philippines, worse than Peru. (Finland leads at 65%.)

The annual digital news report from the Reuters Institute for the Study of Journalism at Oxford also found some improvement in trust in nearly all the countries surveyed — probably thanks to COVID-19 coverage — but not in the U.S. where the low rating was flat year to year.

One explanation, though not necessarily the only one, is the extreme political polarization in the U.S. This study, like many others, found extremely high levels of distrust — 75% of those who identify as being on the right thought coverage of their views is unfair.”

By chance this topic of a loss of media trust emerges as the news spills forth about the tragic collapse of a building in Surfside, Florida. And by chance the coverage of this disaster illustrates exactly why so many Americans distrust the media. 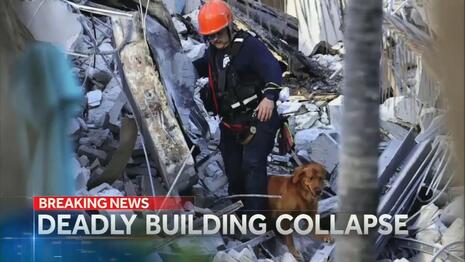 The reporting on Surfside that I have seen is exactly the way many Americans want their media to operate. For one rare moment it was using what once were the golden 5W’s of journalism: Who, What, Where, When and Why.

In the case of Surfside, the Who are the suddenly killed, injured and missing. The What is the collapse of the building. The Where is Florida. The When is about 1:30 in the morning. The Why is still open to question, with some reporting suggesting the building had been slowly sinking into soft earth below. Television cameras are there to show it. The news is nothing but straight facts.

In other words, to borrow the famous line from the very old television show Dragnet and its central character, Los Angeles Police Sergeant Joe Friday, in reporting the Surfside story the media has been all about getting “The facts, m’am. Just the facts.”

That is what millions of Americans want in their media. The facts. Just the facts. And precisely because they don’t get them — and haven’t been getting them now for decades — what results is the distinct and sharp lack of trust in the media that the Reuters study so vividly shows.

One headlining story after another that has dominated the news shows a blatant left-wing bias.

Covid - 19? It’s racist to call it the “China virus” - when in fact the CDC and the World Health Organization have routinely attached geographic place-of-origin names to diseases or pandemics. No one blinked at Lyme Disease (from mostly white Lyme, Connecticut) or the Marburg Virus  (from mostly white Marburg, Germany). But apply the same standard to Covid-19 — particularly if former President Trump says it — then its, yes indeed, racist. Who cares about the facts of standard virus naming when the media can politicize the issue with the predictable leftist tilt?

The emergence of Barack Obama? He’s a saint, and only nasty bigots raise the question of his regular attendance at a Chicago church where his minister, Jeremiah Wright, routinely shouted “God damn America!” Or blamed America for 9/11. It was, in fact, conservative media, notably Fox’s Sean Hannity, who took a serious look at Wright’s sermons and finally caused Obama to separate himself from Wright.

On and on - and on and on - go the topics which have been quick to be reported in a left-leaning political light. Or not reported at all because they would cast a leftist politician or cause in a bad light.

Over here at NewsBusters is another Graham report which illustrates exactly the problem.

There is CNN’s Brian Stelter saying in an interview that “We all need to eat a healthy balanced media diet. That's why I pay for the Washington Post and the L.A. Times, right?”

One doesn’t know whether to laugh or cry at the notion that reading two of the most left-leaning papers in the country constitutes “a healthy balanced media diet.” In a microcosm, that reasoning is precisely why conservative media finally appeared and, whether it was Fox or talk radio, it took off like a rocket. It was the appearance of both Fox and talk radio, not to mention much earlier conservative publications like The American Spectator, National Review and now a forest of conservative web sites like NewsBusters that, in fact, finally provided Americans with a seriously really healthy balanced media diet.

The sad truth here is that the left ruined American trust in the media. They have done it repeatedly, daily, and in the current state of tech play, they are doing it literally hourly.

And these days? They could care less.

Which is exactly why conservative media has such a massive audience.