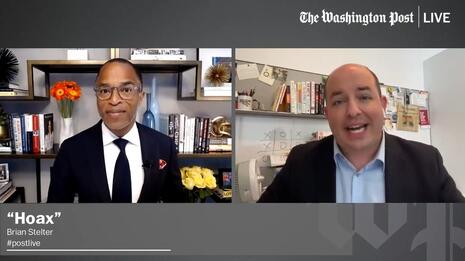 Stelter was hawking the paperback edition of his Fox-bashing book Hoax. Capehart stuck to the horrors of Fox News and Donald Trump for most of the half-hour. At the very end, he squeezed in one audience question.

It was bland and unchallenging: "How can citizens be educated to question propaganda and think critically?"

"It obviously begins early," Stelter replied. "It begins with students. It begins in the classroom." He touted "news literacy" programs in schools. But it turned humorous when he started talking about balanced news consuming.

"At the end of the day, we all need to eat a healthy balanced media diet. That's why I pay for the Washington Post and the L.A. Times, right? I want to hear the California perspective, I also want to know what's happening in Washington and I love the way The Post is expanding globally to cover the whole world," Stelter explained. "I need all of that in my media diet. And we need in our own lives and in our own communities to instill those same values. I think a lot of this is on the individual level, one-to-one, trying to help our friends and neighbors seek out real news."

Earlier, Stelter complained that Trump "hijacked" the term "fake news" and "journalists were caught off guard" by it.

"He used that term to try to ruin the American news media, except for outlets like Fox that he liked. And I think that the damage is -- we're still measuring the damage.," Stelter complained. "Any time I go to interview a source, not at Fox, but you know, in my normal job and that person thinks that CNN is some, you know, evil outlet. That's the damage. Uh, and of course if they turned on the channel, they would see that we were flawed, but trying our best, just like you at MSNBC, just like the New York Times and the Washington Post. We're flawed, but we're trying our best, but Trump. That's the damage he did right by calling us the enemies.

Stelter never seems to consider the media were trying to demonize and damage Trump every bit as much as Trump did to the media.

Brian Stelter complains Trump "hijacked" the term "fake news" and used it "to destroy the American news media.... Any time I go to interview a source, not at Fox, but you know, in my normal job, and that person thinks that CNN is some, you know, evil outlet, that's the damage." pic.twitter.com/129mhaSeZ8