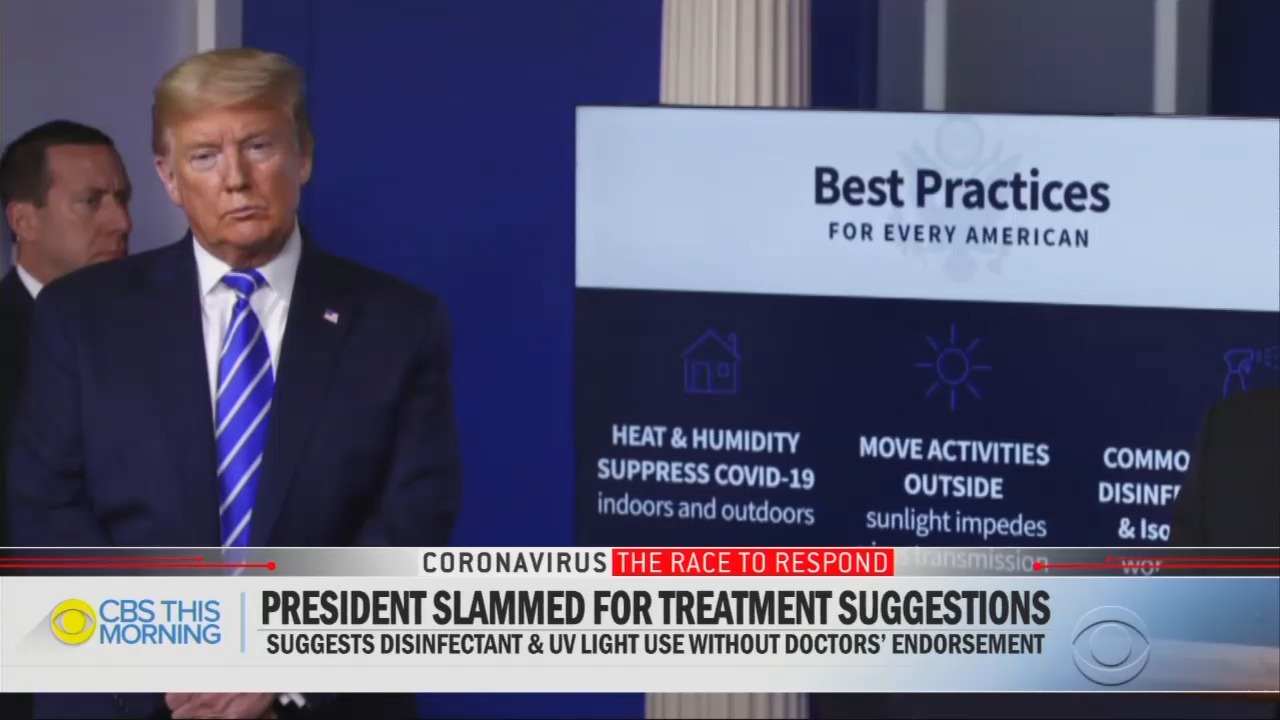 It is unreal to watch.

Supposedly sensible adults in the national media deliberately - say again deliberately - twisting the words of the President of the United States in the middle of a national emergency. Bad enough under any circumstances, but now?

Here are some samples of liberal media Fake News in full hysteria mode:

Vox: “Don’t do this. President Trump’s dangerous suggestion that the coronavirus be treated with bleach injections, explained. This is not true. Don’t do this.”

The New York Times: “Trump Muses About Light as Remedy, but Also Disinfectant, Which Is Dangerous. At a briefing, the president promoted unproven treatments and asked Dr. Deborah Birx if she had heard of the success of sunlight as a tool against viruses.”

At The Daily Wire, Ryan Saavedra fact checked the story:

FACT CHECK: No, Trump Did Not Tell People To ‘Inject Themselves With Disinfectant’ Or ‘Drink Bleach’

There was more of this kind of dangerous nonsense out there in the media like that from the Post, the Times and Vox.

The question is - why in the world would the media ever, ever, - so grossly, make that deliberately, re-cast perfectly understandable English to make it seem something it wasn’t?

There is only one reason, and it is the same now very tired hysteria of Trump Derangement Syndrome. They hate Trump, so anything goes, even in the middle of a pandemic.

A personal story. In the 1950s I was in (!!!) kindergarten. On one day that I still recall, the school nurse appeared in our classroom. And - after obtaining the consent of all our parents - every one of my little classmates was given a small paper cup that contained a syrupy liquid, which we were told to drink. We did. It was my first experience with a vaccine, in this case an oral vaccine for…polio. The vaccine was new, and polio had been a longtime health problem, a serious epidemic, in the United States.

Famously, future president Franklin Roosevelt had contracted polio in 1921 at the ripe old age of 39. When he became president, FDR founded the National Foundation for Infantile Paralysis in 1938, which quickly acquired the name the March of Dimes as millions of Americans, school children prominently, began sending in dimes to help fund the group’s research. My little self paired up with a neighbor and we two kids made and sold pot holders, making the local paper when we donated the profits to the March of Dimes.

No Democrat or media figure of the day was blaming President Eisenhower for polio, or complaining about the now massive use of the oral vaccine. Indeed, as the country had struggled with the polio epidemic over the decades leading up to the vaccine, no president of either party was blamed for the appearance and spread of polio. Even FDR’s opponents of the day supported his fight against polio.

Clearly, the media today is one very long way from the long ago media which concentrated its attention on finding a vaccine for the disease. Indeed, when I was being given the vaccine the two scientists/doctors who had been so involved in finding a treatment - Jonas Salk and Albert Sabin - were made into scientific celebrities of the day.

You would think that in the middle of a global pandemic in which thousands of Americans have already died that the media would be going out of its way to report necessary facts and put aside petty, political distractions that are in fact nothing more than bold misrepresentations of fact designed to damage a president they cannot abide.

But you would be wrong.