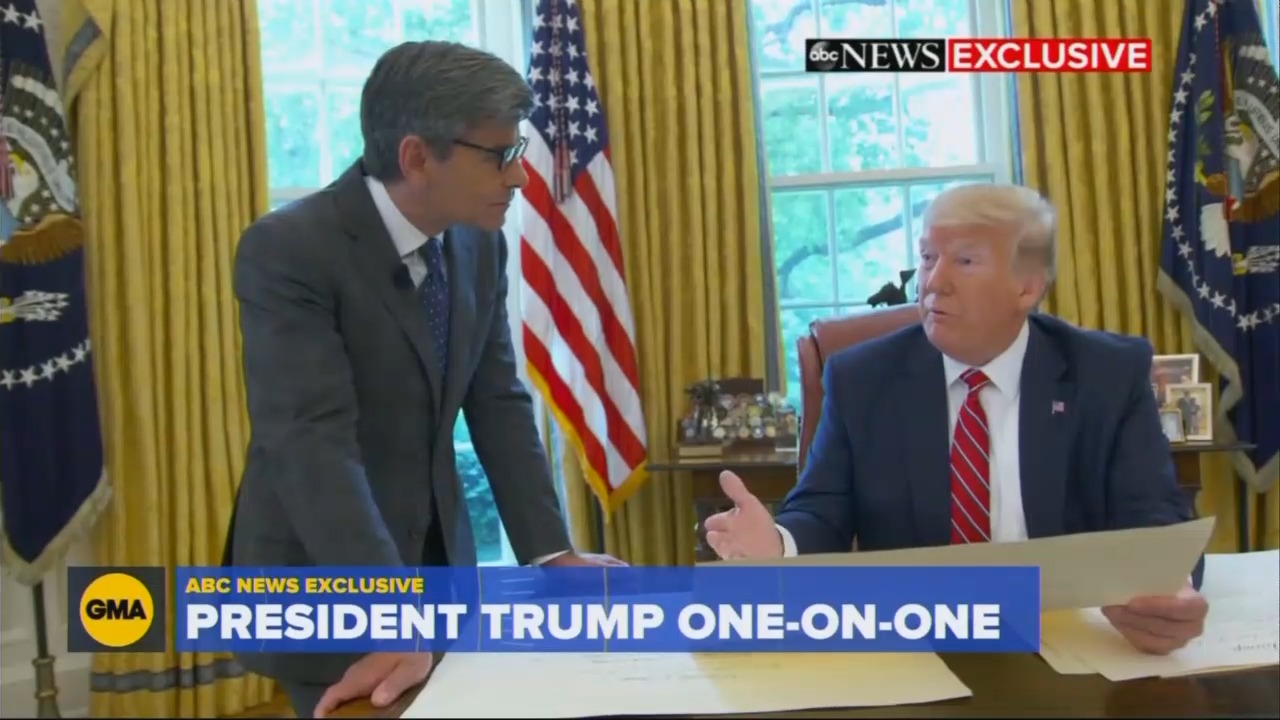 President Trump gives an interview to ABC’s George Stephanopoulos. George famously is the ex-Bill Clinton staffer. George poses a hypothetical to Trump. If he, the President, were offered information on an opponent by a foreign operator, would he take it? To which Trump replied, as per the Washington Post: “I think you might want to listen; there isn’t anything wrong with listening,” Trump said. “If somebody called from a country, Norway, ‘We have information on your opponent,’ oh, I think I’d want to hear it.”

As Fox’s Tucker Carlson, Sean Hannity and Laura Ingraham re-played in detail, there were the instantly outraged talking heads of MSNBC, CNN and elsewhere (not to mention Nancy Pelosi and her crew of House Democrats) foaming that Trump’s answer to this hypothetical constituted treason.

Uh oh. Hannity wondered aloud if that snap you just heard was the sound of a Trump trap springing shut — getting all these people to go on the record that information obtained from a “foreigner” was treasonous.

Here are the comments as played by Tucker:

MSNBC: “He (Trump) is a traitor to our democracy.”

CNN: Former National Intelligence director and now CNN contributor James Clapper: “I’ve run out of adjectives to describe my reaction to this.” To which Anderson Cooper replied: “If any other president said anything resembling this…you know…Republicans in Congress would understandably, you know, have called him a traitor.”

CNN: David Chalian, the CNN political director: “It is unthinkable what he said. It disintegrates at the very core our democracy is about.”

MSNBC: “This is the definition of collusion.”

Barely able to keep a straight face, Carlson quickly zeroes in on the obvious. It was the Clinton campaign who paid for a foreigner —  Britain’s Christopher Steele —  to use other foreigners - Russians - to write a completely phony “dossier” that was a massive, deliberate interference by foreigners in the 2016 election.

Applying their own words to Hillary Clinton, these people inadvertently walked right smack into what could easily have been a Trump trap. Tucker focused on this tweet from 2016 Clinton campaign spokesman Brian Fallon: “I regret I didn’t know about Christopher Steele’s hiring pre-election. If I had, I would have volunteered to go to Europe and try to help him.”

The Washington Post quoted Fallon as doubling down on this: “I probably would have volunteered to go to Europe myself  to try and verify if it would have helped get more of this out there before the election.”

Which is to say Fallon was regretting that he didn’t have the personal chance to help the Russians interfere in the 2016 election.

Hannity had a clip of MSNBC’s Rachel Maddow proclaiming that what Trump said proved “criminal intent.” Which is to say, over there in the wonderland of MSNBC answering a hypothetical question shows criminal intent — but actually paying foreigners for information - false information as in the dossier, is one big no big deal. Right.

Tucker pointed out the obvious. By the standards of California Democratic Congressman Ted Lieu what everyone of these talking heads were advocating is “anti-American.” And the curious thing, Tucker noted, not only is Brian Fallon not in jail —  not a single person connected to the Clinton campaign has been prosecuted for actually doing what Trump was merely musing about doing hypothetically.

Ingraham pointed out that, perhaps belatedly aware of their mistake, liberals in the media hastily backtracked and tried to say that yes, somehow, some way, there was a difference between what Trump said and what Hillary actually did.

What all of this illustrates in quite vivid terms is the massive double standards in the liberal media. Exactly as Hannity said, “the hypocrisy reeks.” All of these people and networks listed above have said that if you take information from a foreign source this is treason. Hillary Clinton not only took information from foreigners — Steele and Russians — she paid for it.

Also in that Stephanopoulos interview? Stephanopoulos himself played fast and loose with his memory of Al Gore. Gore, said the Good Morning America co-host, received a stolen briefing book in 2000 and contacted the FBI. True. But what he left out was this episode - when Gore was caught fundraising from his White House office. Here’s the account from the day — 1997 - as written by the late Charles Krauthammer in the Washington Post:

“‘There is no controlling legal authority that says this was in violation of law.’ - Al Gore, seven times (in one form or another), White House news conference, March 3.

‘Controlling legal authority.’ Whatever other legacies Al Gore leaves behind now and retirement, he forever bequeaths this newest weasel word to the lexicon of American political corruption.

Gore is talking here about his phone calls from the White House soliciting Democratic campaign contributions. Now, he cannot say, ‘I have broken no law,’ because Section 607 of Title 18 of the U.S. Criminal Code states very clearly there is to be no solicitation of campaign funds in federal government offices. Gore broke the law as written, as understood and as practiced. His defense? Apparently, that there are no cases testing the law. So there.”

In other words? What Stephanopoulos left out was that no one in the Clinton administration called the FBI on Gore when he was caught red-handed violating federal law. Much less did Gore call the FBI on himself.

This past week has been an exceptional week for the Leftist State Media to illustrate exactly how they work. And the President plays them like a fiddle. As Hannity also said, “if the President didn’t set them up on purpose he couldn’t have set them up better. They took the bait hook, line and sinker.”

Indeed they did.  Which explains the reason behind a headline like this: “CNN Sucks: Primetime Ratings Down 26 Percent, While Fox News Dominates.”

At a certain point one can only marvel that the Leftist State Media plunges on in their various blind rages - and in the case of their reaction to Trump’s remarks, doing so utterly heedless that they have managed to set themselves up as essentially admitting that Hillary Clinton committed treason for soliciting information from foreigners.

No wonder Hannity gets to focus on “selective moral outrage” from the media and always underlines that “journalism is dead.”

Indeed it is. And this week’s hysteria and hypocrisy could not better illustrate the point.