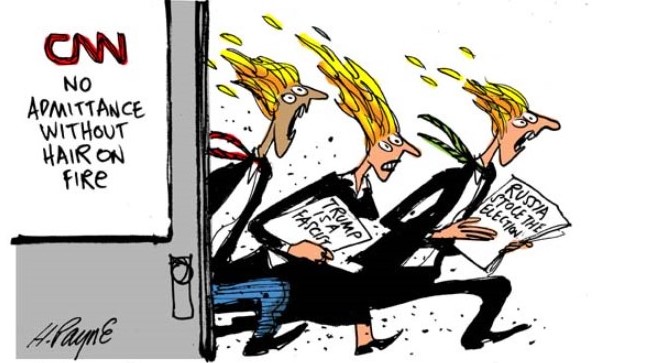 The disastrous news for Russia-obsessed liberals  that the Mueller Report would not lead to the immediate end of the Trump presidency must have put CNN's viewer base in a deep depression. [Cartoon by our friend Henry Payne]

The numbers were brutal:

-- CNN's total audience in prime time was well under a million viewers -- 767,000 -- while Fox News led all cable channels with a total audience of 2.395 million. MSNBC was in second place overall with 1.66 million total viewers. April ranks as CNN's lowest-rated month among total viewers in nearly four years, since October 2015.

-- Fox’s regularly scheduled evening lineup crushed CNN’s five hours of town halls with Democrat presidential contenders on April 22, bringing in 2.3 million viewers and 380,000 in the 25-54 age demo while CNN came in last in total viewers with 1.2 million and 371,00 in the demo for the night.

-- For Fox News, the latest ratings show it's been the most-watched cable news network in prime time and total day for 208 consecutive months. That's seventeen years and four months.