Well that was predictable.

For those who came in late, the “grassy knoll”  was once upon a time an American slang reference to those conspiracy theorists who believed that President John F. Kennedy was not killed by assassin Lee Harvey Oswald firing down on JFK from the 6th floor of the Texas School Book Depository in Dallas.  Rather, JFK was shot from the front by a mysterious assassin or assassins firing from the grassy knoll of the small city park adjacent to the Book Depository.

The Warren Commission investigating the assassination concluded otherwise as there was no proof, but this didn’t stop the conspiracy theorists. Ever after the phrase “grassy knoll” became a part of the American vernacular - indicating that someone was a bit of a wacko and their theory of whatever was just nutty conspiracy.

The let-down in the media was palpable. And when Barr added insult to injury by saying that, in fact, he believed there had indeed been spying on the Trump campaign —  the angry grassy knollers in the media erupted.

With all the predictability of the sun rising in the east, the grassy knoll media spun around to accuse Barr of being —  you guessed it —  a grassy knoll conspiracy theorist himself. Except this time the grassy knoll “conspiracy theory” was that a collection of Obama bureaucrats had conspired to spy on the Trump campaign, and when there was a failure to stop Trump’s election, a silent coup was initiated to remove him from the White House. 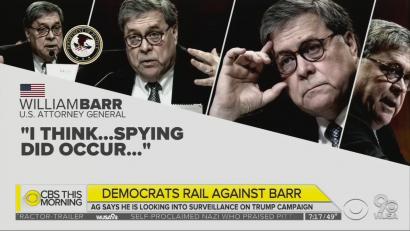 In a media that long ago threw objectivity and facts overboard in the service of the American Left and the Democratic Party, Barr was descended upon with a savage fury.

The Washington Post’s Aaron Blake fumed that the very word “spying” “is a highly disputed term when it comes to what the FBI did relative to the Trump campaign in 2016.” This would be the same Aaron Blake who expressed his disbelief at Barr’s summary of the Mueller Report’s findings of no collusion by headlining in fine grassy knoll style: ‘No collusion,’ after all?

As a matter of fact, all the way back in 2018, when Trump himself was talking about the anti-Trump plotters in the Obama bureaucracies, Blake headlined, “The No. 1 reason Trump’s ‘spygate’ conspiracy theory doesn’t make sense.”

Over in the grassy knoll precincts of CNN, which has spent a full two years with non-stop coverage of the Trump-Russia collusion fantasy, Stephen Collinson fumed: “Barr obliterates honest broker persona with 'spying' comment.”

With one word -- "spying" -- Barr on Wednesday ingratiated himself with his new boss, gave fresh life to a conservative media narrative and obliterated any remaining chance that he can now be seen as a good faith arbiter of the Mueller report.

Got that? The phrase “conservative media narrative”? That’s leftwing State Media language for: “don’t investigate and get the facts because they may hurt our side.”

The Los Angeles Times editorial board headlined its anger at Barr this way: “William Barr gives aid and comfort to Trump's conspiracy theories.”

And, to return to the Washington Post, the far-left Jennifer Rubin (she who is routinely and laughable falsely advertised as a “conservative” columnist) foamed in classic grassy knoll style that “Barr fed the right-wing conspiracy machine, misled Congress and defamed his own department.” And therefore, but of course, Barr should be impeached.

There was more of this kind of nonsense. All of it underlying a central fact - and say again, “fact.” The hard fact is, as the Washington Examiner’s Byron York headlined: “Barr is right, spying on Trump campaign did occur.”

York had the nerve to remind this:

Cable news commentators called Barr's statement "stunning" and appeared baffled that the attorney general would make such a claim "without evidence.”

The baffling thing was why they were baffled. Barr's statement was accurate and supported by publicly known facts.

….It is a fact that in October 2016 the FBI wiretapped Carter Page, who had earlier been a short-term foreign policy adviser to the Trump campaign. The bureau's application to a secret court for that wiretapping is public. It is heavily redacted but is clearly focused on Page and "the Russian government's attempt to influence the 2016 U.S. presidential election." Page was wiretapped because of his connection with the Trump campaign.

So there is simply no doubt that the FBI wiretapped a Trump campaign figure. Is a wiretap "spying"? It is hard to imagine a practice, whether approved by a court or not, more associated with spying.

What we have is a Leftist State Media that has spent two years insisting that their grassy knoll conspiracy theory of Trump-Russia collusion was fact. It wasn’t. But it is indeed a fact that the FBI wiretapped - spied on - the Trump campaign.

And for all those grassy knollers in the media who have been demanding transparency and facts? They are now furious that Attorney General Barr is going to give Americans just that.