Hey, Ted Koppel: The NY Times Was Biased 50 Years Ago Too

As was noted right here at NewsBusters by P.J. Gladnick in a session at the Carnegie Endowment for  International Peace with Marvin Kalb, former ABC anchor Ted Koppel, the epitome of the Establishment media, had something startling to say. And as P.J. noted, Koppel sounded downright NewsBuster-y. Said he, in this clip captured by Nicholas Ballasy (with emphasis supplied): 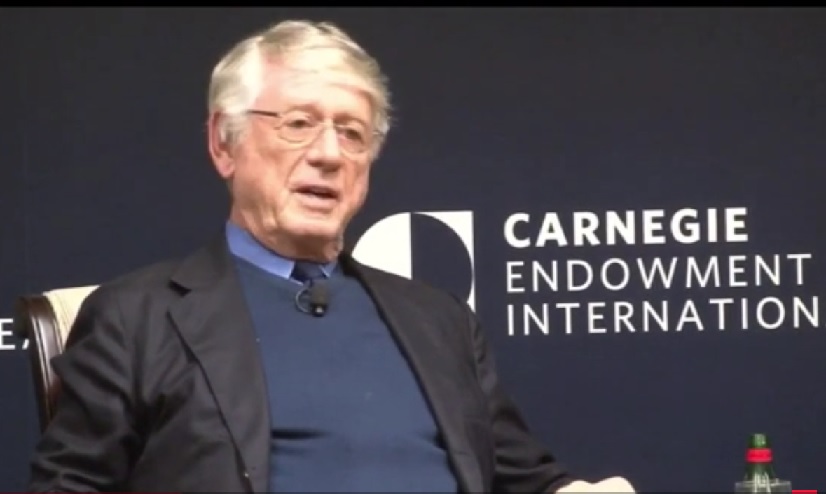 Congratulations, Mr. Koppel. You get it. Sort of. The problem of course is that antipathy to President Trump extends far beyond the Times and the Post —  and this problem is hardly new. The foaming anti-Trumpism is pervasive through the so-called “mainstream media”, or as I have taken to calling it, the “Leftist State Media” - the LSM.  But the bias against conservatives from the LSM has been around, contrary to Koppel’s suggestion, for decades.

Really? There’s another politician — now deceased — who would, were he still here, laugh out loud at the idea the New York Times of 50 years ago was a paragon of objectivity. On July 17, 1964, the new Republican nominee for president, the conservative Arizona Senator Barry Goldwater, made the Times in this fashion. The headline as the Senator prepared to accept his nomination at the GOP Convention in San Francisco: “Senator Charges Lies to the Press; Accuses Some News Media of ‘Utter Dishonesty.’”

SAN FRANCISCO, July 17 (UPI)—The Republican Presidential nominee, Senator Barry Goldwater, has charged in an interview that some of the news media have resorted to “utter dishonesty” and “out and out lies” in reporting his campaign activities.

“Newspapers like The New York Times have to stoop to utter dishonesty in reflecting my views. Some of the newspapers here in San Francisco like The Chronicle—that are nothing but out and out lies. Now if they disagree with me, fine, that’s their right.”

He was also critical of the Columbia Broadcasting System [CBS], claiming the network had “pulled three sneakers on me that I’ll never forgive them for.”...

He said the network, in one example, had reported he was going to Germany after the convention to “return to the site of the Führer’s point of starting and start my campaign there, that I had an invitation to speak in Germany to a rightwing group, [and] that my effort would be to cement the relations between the extremist groups in America and Germany.”

“This is nothing but—and I won’t swear but you know what I’m thinking—a dad burned dirty lie,” he said.

In other words? A full 55 years ago a prominent conservative and Republican presidential nominee was flatly accusing the New York Times, CBS and other media outlets of flat-out lying about him. In this case what had Goldwater especially steamed was that he was a veteran of World War II and a then-serving Major General in the US Air Force Reserve. Yet it was being suggested in the media that he was some sort of wannabe Nazi who was, to borrow a term from our current news, “colluding” with German neo-Nazis.

Not only wasn’t it true, Goldwater found it infuriatingly insulting. Indeed, decades later in his memoirs he was still foaming at his treatment by the Times and CBS.

In 2016, the City Journal looked at the media coverage of 1964. Apparently, the Republican was a cross between Hitler, Stalin and other dictators.

At the height of the 1964 race between Arizona’s junior senator, Barry Goldwater, and President Lyndon Johnson, the cover headline of Fact magazine’s September–October issue practically screamed: 1,189 PSYCHIATRISTS SAY GOLDWATER IS PSYCHOLOGICALLY UNFIT TO BE PRESIDENT! Inside, every page was given over to the feature, titled “The Unconscious of a Conservative: A Special Issue on the Mind of Barry Goldwater.”

The “psychiatric evaluations” that took up the next 40 pages were in response to a question that Fact sent to the nation’s psychiatrists from a list supplied by the American Medical Association: “Do you believe Barry Goldwater is psychologically fit to serve as President of the United States?” Ruth Adams of New York replied that she saw in the GOP candidate “a strong identification with the authoritarianism of Hitler, if not identification with Hitler himself,” and other responding psychiatrists echoed that theme. “I believe Goldwater has the same pathological make-up as Hitler, Castro, Stalin and other known schizophrenic leaders,” wrote Chester M. Johnson, Jr., of Long Beach, while Philadelphia’s Paul Fink observed that, like the Führer, the Republican nominee “appeals to the unconscious sadism and hostility in the average human being.” G. Templeton, of Glen Cove, New York, warned that “if Goldwater wins the Presidency, both you and I will be among the first into the concentration camps.”

What Ted Koppel is saying about the Times and Post today is true. But aside from ignoring the history of left-wing bias in the media over the decades, he doesn’t go far enough in his analysis of the media today. Indeed, not long ago CNN president Jeff Zucker was in Austin, Texas for a gathering of the hip liberal crowd and without the slightest sense of irony said this of competitor Fox News: "It is really state-run TV, it is a pure propaganda machine, and does an incredible disservice to this country," Zucker said at a media industry conference on Thursday.

He added, "The idea that it's a news channel, I think, is really not the case at all.” Zucker said of Fox journalists: “They chose to work at Fox and they don’t get to hide behind the fact that they’re excellent journalists or anchors. The fact is they work at a place that has done tremendous damage to this country.”

Translation: Fox is not the Leftist State Media, and the fact that it chooses not to follow the herd of liberal journalists is doing “tremendous damage to this country.” There was not the slightest sense of recognition that maybe, just maybe, it is the Leftist State Media that is doing the real “tremendous damage to this country.”

Recall as well that in 2017 Ted Koppel persuaded Sean Hannity to sit down for an interview on the CBS Sunday Morning show. Koppel told Sean that he thought Sean was “bad for America” — and quite clearly the reason was that Sean has the audacity to disagree with the LSM. And in an almost too-perfect illustration of one of the tricks of the LSM trade, Sean had spent 40-50 minutes taping the show. And what was used? What was aired? That would be one minute and ten seconds worth of tape.

In other words? Whether it was Barry Goldwater in 1964 or Sean Hannity in 2017 or Donald Trump in 2019, the tricks of the Leftist State Media have never changed.

The only thing that has changed is that Ted Koppel was willing to acknowledge the problem with the Times and the Post. Good for him. But there is oh so much more to this problem.

Which is exactly why conservative media exists in the first place.