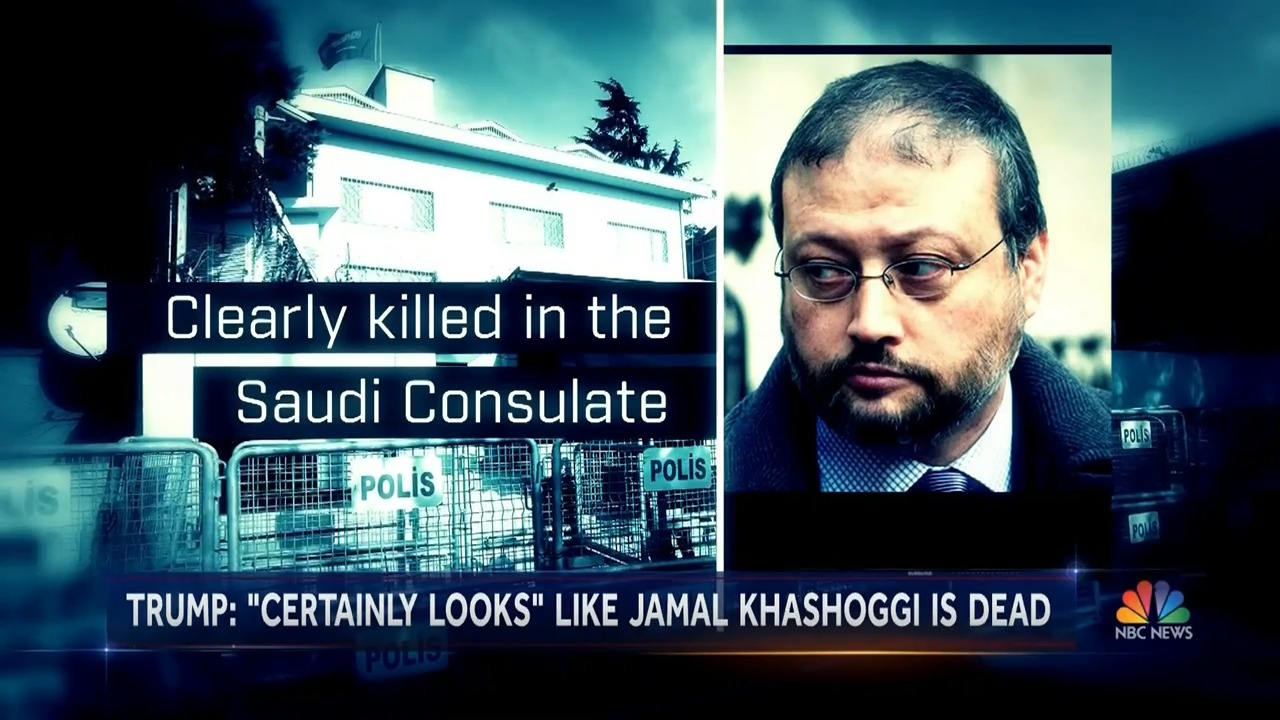 So in all the justifiable uproar over the apparent murder —  gruesome murder at that —  of Washington Post contributor Jamal Khashoggi, over at Fox Howard Kurtz of Media Buzz has opened a window on an amazing liberal media/liberal Hollywood double-standard.

Kurtz’s headline: “A Reckoning for Those Who Take Dirty Saudi Oil Money.”

The liberal media is trashing President Trump for his insistence on getting the facts before taking action against Saudi Arabia. Not unlike the attacks on Bret Kavanaugh, there is an insistence in the liberal media (and elsewhere) to punish Saudi Arabia before there is an investigation of exactly what happened to Khashoggi- the foreign policy equivalent of not giving the Saudis due process on this. When it comes to what happened here, the President has accurately said they should not be found guilty until proven innocent. Stay tuned.

But there are other things which have long been known about the Saudis - and which has been steadfastly ignored by both the liberal media and their liberal Hollywood pals.

Kurtz points to this very interesting story over in the Hollywood Reporter.

Endeavor is, of course, one of the big Hollywood talent agencies representing all kinds of film and television talent. It is headed by one Ari Emanuel, the brother of Chicago Mayor Rahm Emanuel. The story begins this way:

“Endeavor is extricating itself from a deal with the Saudi government to invest $400 million into the company, The Hollywood Reporter has learned.

The move comes as pressure mounts for Hollywood to take a stand against the kingdom in the wake of the disappearance — and possible murder — of Saudi journalist Jamal Khashoggi, who wrote for The Washington Post.

Sources say paperwork is being drawn up that would terminate the deal for the Saudi Arabian sovereign wealth fund, which was created by the government to back projects at home and abroad, to take a 5-10 percent stake in Endeavor.”

Interesting, yes? Hollywood liberals take a stand against alleged Saudi complicity in a gruesome murder of a Post contributor. Ahhh but wait. There’s more here. A very interesting something more. The Hollywood Reporter story goes on to say that Endeavor represents:

“….a number of high-profile journalists like Ronan Farrow, Soledad O'Brien and Joe Scarborough. Sources say many had been putting pressure on Emanuel to cut ties with Saudi Arabia.”

At this is posted, no final decision about the facts in the Khashoggi case has been reached. But to understate, the facts about the Saudis in other areas have long been on public record —  and there were no angry words of departure from Endeavor from the liberal journalists mentioned above.

The story was prompted by the shooting at a gay nightclub in Orlando, a mass murder that killed fifty people and wounded another fifty three.  The shooter was a Muslim, one Omar Mateen. Mateen was himself killed by police. This is what caused the Post to run the story headlined above, and it began this way:

“In the wake of America's deadliest mass shooting ever — at a gay nightclub in Orlando on Sunday — we have updated our map of LGBT rights around the world.

….we take a closer look at the 10 countries in which homosexuality can be punishable by death.”

“Saudi Arabia: Under the country’s interpretation of sharia law, a married man engaging in sodomy or any non-Muslim who commits sodomy with a Muslim can be stoned to death. All sex outside of marriage is illegal.”

Hmmm. So let’s put these two facts together.

American journalists Ronan Farrow, Soledad O’Brien, Joe Scarborough, Mika Brzezinski, Chris Matthews, and Scott Pelley have been all this time represented by Endeavor. Endeavor, in turn, had “a deal with the Saudi government to invest $400 million into the company…”

This being the very same Saudi government where, according to the Washington Post, “any non-Muslim who commits sodomy with a Muslim can be stoned to death.”

And how have these liberal journalists tried to portray themselves when it comes to the subject of gays? Be it gay rights or gay marriage? This way.

Here is Soledad O’Brien back in 2012, as illustrated right here at NewsBusters, going after the Family Research Council’s Tony Perkins because he opposed gay marriage - painting herself as the picture of tolerance and strong support for the gay community.

Here are Joe Scarborough and Mika Brzezinski hammering former Arkansas Governor Mike Huckabee for his support of Kentucky county clerk Kim Davis. Davis was in the news because she refused to issue marriage licenses to same sex couples.

Here is Chris Matthews, as headlined here at NewsBusters in 2012 lecturing a black pastor over the pastor’s opposition to same sex marriage. The headline on the story by Scott Whitlock: “MSNBC's Chris Matthews to Black Pastor: 'I Hope You Evolve.”

Said Pelley in saluting the Court’s support for gay marriage: “Friday, the tremor moved the stone at the court -- shifting the words carved there - nearer to the truth. Millions of Americans, for the first time in our history, achieved their "equal justice under law.”

And Ronan Farrow? It turns out, as reported here in The Advocate that in accepting an award at a dinner for the Point Foundation Farrow described himself as “a part of the LGBT community.” The Point Foundation describes itself as “the nation’s largest scholarship-granting organization for lesbian, gay, bisexual, transgender, and queer (LGBTQ) students of merit.”

What we have are a group of liberal journalists - everyone of them public and strong supporters of gay rights, one of them himself gay - being represented by a talent agency that had a $400 million investment deal with the Saudi government. That would be the self-same Saudis, who, again according to the Washington Post, punish gays in their country by stoning them to death. And not a one of these liberal journalists - not a single, solitary one of them - uttered a word of protest about their agency’s ties to the Saudis until this minute when the Khashoggi case suddenly applies heat.

In other words, the brazen hypocrisy here is mind blowing.