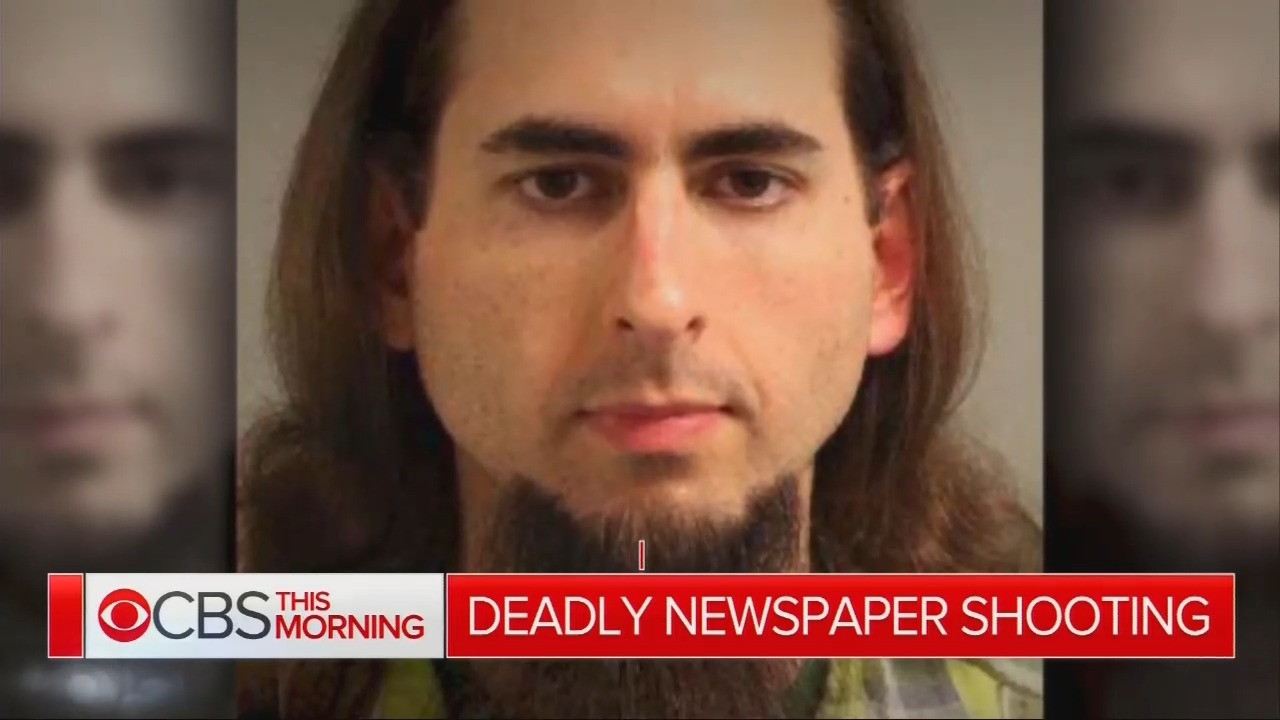 Let’s start with that craziness that used to be known in journalism as The Facts. In this case the facts about the shooting this past week at the Capital Gazette in Annapolis, Maryland.

One Jarrod Ramos, the alleged shooter, was very angry with The Capital Gazette. Here is what is known as The Facts about Mr. Ramos as reported - factually, praise be - by The Los Angeles Times.

“Court records and social media posts revealed that Ramos launched a lengthy and disturbing vendetta against the company after its daily newspaper, the Capital, ran a 2011 column describing how he was convicted of criminally harassing a woman who had turned down his advances.

The story, about the woman’s plight, described “months of emails in which Ramos alternately asked for help, called her vulgar names and told her to kill herself. He emailed her company and tried to get her fired.”

"She stopped writing back and told him to stop, but he continued,” the columnist, Eric Hartley, wrote. “When she blocked him from seeing her Facebook page, he found things she wrote on other people’s pages and taunted her with it, attaching screenshots of the postings to some of his emails. She called police, and for months he stopped. But then he started again, nastier than ever.”

The account also included a post alluding to shootings of journalists, including the 2015 attack on the Charlie Hebdo offices in Paris and two Virginia television journalists who were killed on live television later that year.
‘He waged a one-person attack on anything he could muster in court against the Capital,’ Tom Marquardt, the newspaper’s editor and publisher until 2012, told The Los Angeles Times in a phone interview.”

Notice anything there, Rob Cox of Reuters? The attack on the Charlie Hebdo offices in Paris was in….2015. January of 2015. Who was not a candidate for president in January of 2015? Who was not in the headlines everyday? That would be….NBC reality TV star Donald Trump, who did not announce his candidacy until….six months later.

The other attack on journalists, according to The Facts, was the August, 2015 slaying of two Virginia TV journalists while on air. And here are just the basics of The Facts from that episode, according to that far-left wing rag The New York Times.

“ROANOKE, Va. — He was a fired television reporter with a history of conflicts at work and rage apparently stoked by racial grievances. And when he sought revenge on Wednesday, gunning down two former colleagues, he used the tools of social media to ensure that his crime was broadcast live, recorded from multiple angles and posted online.

Vester Lee Flanagan II, 41, identified by the authorities as the gunman, waited until Alison Parker and Adam Ward, young journalists at WDBJ in Roanoke, were on air, then killed them while recording on his own video camera. Mr. Flanagan shot himself in the head hours later, the authorities said, but as the chase for him was on, he wrote about the shooting on Twitter, uploaded his video to Facebook and sent a manifesto to ABC News that spoke admiringly of mass killers and said that as a black, gay man he had faced discrimination and sexual harassment.”

Notice anything there, Rob Cox of Reuters? This attack on journalists was committed by a crazed ex-colleague “with a history of conflicts at work” and a pile of “racial grievances.” And oh yes, the killer was not just black he was also gay and believed “ he had faced discrimination and sexual harassment.”

Well, clearly The Facts in these incidents as reported by journalists were just one big no-never-mind at Reuters. In the style of Inspector Clouseau, Mr. Cox, per Breitbart the “Global Editor for Thomson Reuters’ Breaking views vertical” quickly nailed the real culprit, tweeting thusly: 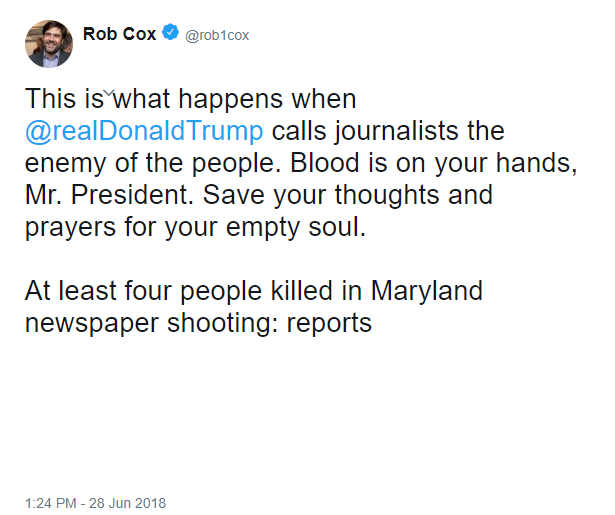 Then, as those pesky things in journalism known as The Facts began to emerge, a red-faced Mr. Cox tweeted: 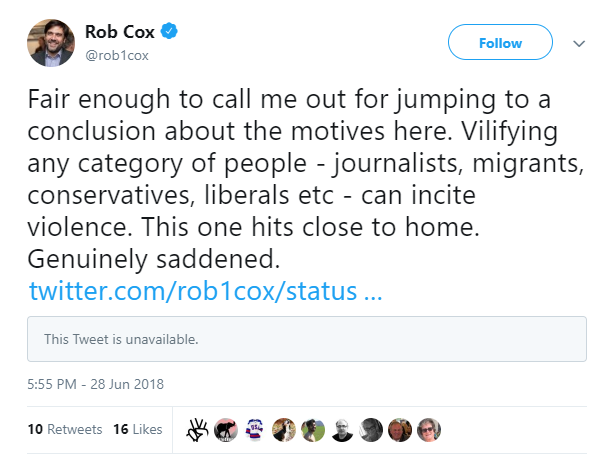 Notice anything there in Cox’s mea culpa? This line: “Vilifying any category of people - journalists, migrants, conservatives, liberals etc - can incite violence.”

Curiously, for someone who has Donald Trump at the forefront of his worldly musings, the President is not included in that riff about “Vilifying any category of people…” unless, of course, the President is included in the always convenient “etc.” And vilifying this President has been a non-stop occupation for Mr. Cox’s media colleagues, although apparently Cox is unwilling to call them out. The President has been compared to Hitler (CNN), called a racist (CNN, The New York Times, The Washington Post and more), a fascist (The Washington Post) and, well, more.

All of this and not a peep of objection from Rob Cox.

Now what? In addition to the “fair enough to call me out” tweet above, Cox pumped out more apologias. 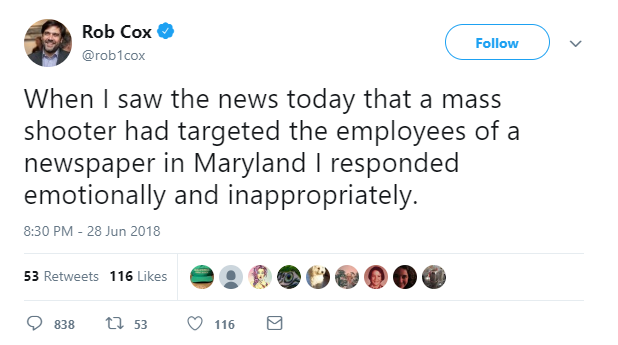 He added that "though my comments were entirely personal, they were not in keeping with the Reuters Trust Principles and my own standards for letting facts, not snap judgments, guide my understanding."

What are the “Reuters Trust Principles” to which Cox refers? They can be found here and begin as follows:

“The Trust Principles were created in 1941, in the midst of World War II, in agreement with the Newspaper Publishers Association and the Reuters shareholders at the time. The Principles imposed obligations on Reuters and its employees to act at all times with integrity, independence, and freedom from bias and fortified them in carrying out the difficult and delicate tasks with which they were faced.”

Mr. Cox’s boss at Reuters, Editor-in-chief Steve Adler felt compelled to issue his own statement saying that Cox’s tweet  was “inconsistent with the Thomson Reuters Trust Principles requiring journalists to maintain freedom from bias. We do not condone his behavior and will take appropriate action.”

Okay. Fair enough as far as it goes.

To cut to the chase? What we are seeing in the case of Rob Cox is exactly what millions of Americans have always suspected. To wit: Under the guise of non-bias -in this case the in-house Reuters Trust Principles- many journalists are in fact biased beyond belief. So too are all kinds of people in the supposedly politically neutral Washington bureaucracies like the FBI.

And that, dear reader, is not fake news.