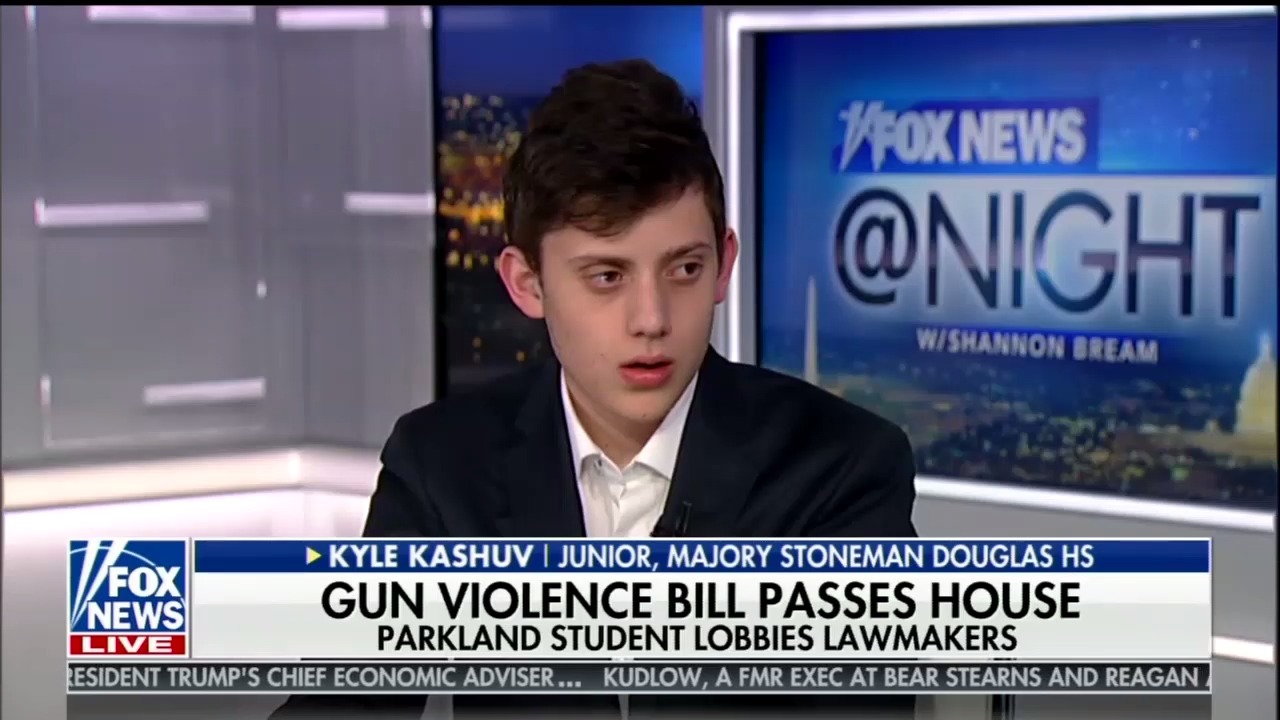 It is always amazing to see a supposedly “objective” media outlet in headlong pursuit of a leftist agenda item. This time? Time magazine has outdone itself in the media bias category, with CNN right behind them.

Time made the perfectly normal journalistic decision to feature students from Parkland, Florida’s Marjory Stoneman Douglas High School on its cover. The caption in capital letters: “ENOUGH”. Fair enough —  if the idea is that Time is some even-handed news magazine reporting on a “just the facts m’am” basis.

But, of course, that’s not what Time did. In a style worthy of the old Soviet propaganda sheet Pravda —  English translation “Truth” —  what Time did was spectacularly dishonest. Yes, for sure, kids from the Parkland’s high school have emerged as gun control advocates. But there’s another kid out there, also from the exact same school, who has a considerably different view of the issue.

The real story- the real truth — goes like this:

“The cover of Time magazine this week features five anti-gun survivors of the Parkland, Fla., high school massacre, but has drawn criticism for pointedly omitting their pro-Second Amendment classmates.

One of those students, Kyle Kashuv, has been a prominent advocate for preventing violence while respecting gun rights in the weeks since the Feb. 14 shooting at Marjory Stoneman Douglas High School.

Kashuv has visited the White House, met with President Donald Trump and legislative leaders across party lines, and unveiled an app to prevent school shootings.

But unlike the students appearing on Time magazine's cover, including outspoken NRA opponents and "#NeverAgain" members Emma Gonzalez and David Hogg, Kashuv has publicly declared his support for the Second Amendment and tussled with liberal media figures.”

(For more on Mr. Kashuv, see NewsBusters.) And what does young Mr. Kashuv have to say about this? Well, the obvious: "There’s definitely a media blackout.” Indeed. And in the style of today’s social media and photo shopping, Kashuv did the following:

“When one Twitter user asked why Time had not included students who support gun rights, Kashuv answered, ‘Cause that would make TIME be unbiased.’

He also retweeted parody versions of the Time cover, including one that features him with another conservative student from Parkland. The headline: ‘The Boys who Believe that Screaming ENOUGH is NOT ENOUGH.’”

Switch now to CNN. It seems Kashuv was invited to appear on CNN - and suddenly he was uninvited. Why? Said the high school student:

“But don't worry, CNN really wants to have the other side on, as long as they're complicit,” he tweeted later that day.

‘There's definitely a media blackout’ for those with dissenting, pro-gun rights views, he told the Daily Signal.”

Not to put too fine a point on this, but games like this are seriously bad for the reputations of these journalistic institutions. They are damaging to those media institutions — like Time and CNN — that say they are “objective” or straight-down-the-middle in reporting straight facts. When, in fact, they are anything but. Actions like this make them appear as PR agents for whatever leftist cause of the moment is up for discussion, in this case, guns. Going out of their way to exclude a high school student, a teenager from a school that has suffered a mass shooting, simply for the blatantly obvious reason of pushing the Leftwing view of gun control is appalling as journalism. In fact, it isn’t journalism at all.

On occasion I have cited the following from a long ago political best seller by the Pulitzer Prize-winning author Theodore H. White. The late Mr. White wrote the then-groundbreaking The Making of the President 1960, the first of a twenty-year long quadrennial list of similar books that told the story of presidential elections.

The 1960 book was the tale of the iconic Kennedy-Nixon election. Towards the end, as White writes of the traveling press corps covering John F. Kennedy, after describing how JFK’s staff tended so well and kindly to the press, he writes:

“There is no doubt that this kindliness, respect and cultivation of the press colored all the reporting that came from the Kennedy campaign, and the contrast colored adversely the reporting of the Nixon campaign. By the last weeks of the campaign, those forty or fifty national correspondents who had followed Kennedy since the beginning of his electoral exertions into the November days had become more than a press corps-they had become his friends and, some of them, his most devoted admirers. When the bus or the plane rolled or flew through the night, they sang songs of their own composition about Mr. Nixon and the Republicans in chorus with the Kennedy staff and felt that they, too, were marching like soldiers of the Lord to the New Frontier.”

Here we are a full 58-years later and not only has nothing changed, the problem is worse. JFK and his loving press corps buddies are long gone. But when it comes to pushing the left-wing agenda of the moment — in this case gun control — the media has become the modern version of those “reporters” in 1960 who “felt that they, too, were marching like soldiers of the Lord to the New Frontier.”

If that means they have to put down and deny fair coverage to a high school teenager who has had the guts to stand up and oppose not only his peers (no small thing for a teenager in any high school) but the entire leftist media industrial complex — the teenager personifying what JFK might call a “profile in courage” — then they will do it. In New York minute.

If you want to know why so many Americans are cheering on President Trump and his wholesale assault on the Old Order octopus of American liberalism that has its tentacles everywhere in American society, most visibly in the media, the exclusion by Time and CNN of a young gun control opponent named Kyle Kashuv would be a good place to start.