Here’s your daily reminder of how pathetic CNN has become.

On Wednesday morning, pro-Second Amendment Parkland student Kyle Kashuv claimed that his long-awaited CNN interview was canceled just hours beforehand. He said that CNN cited a Clay Travis retweet calling out Brooke Baldwin for being a “fake news hypocrite.” Travis, of course, was the sports commentator who was booted off of Baldwin’s CNN Newsroom in September for saying “boobs.”

While most Parkland students have been busy colluding with far-left groups for Saturday’s March of Our Lives and appearing on liberal media outlets for softball interviews despite their vile rhetoric, Kashuv has been reaching out to lawmakers of both parties in hopes of passing the Stop School Violence Act.

Kashuv had tweeted about his eagerness to appear with Baldwin on Wednesday afternoon, but that all changed early in the morning: 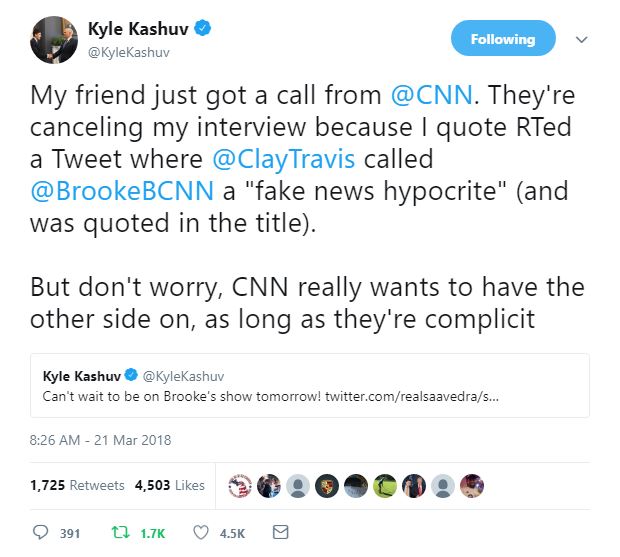 “.@CNN canceled my interview with them for a RT of an article that states actual facts in there, but for some reason they don't say a word when people call @DLoesch a child murderer, the @NRA murderers, and @marcorubio is like looking down the barrel of an AR-15 on their network,” he added in a subsequent tweet.

Kashuv explained that he was initially invited by email on March 12, but the two sides were “unable to get it scheduled until today.” For good measure, he noted that the shooting took place on February 14 and he did his first one-on-one TV interview on February 25. Needless to say, he’s been waiting to go on CNN after hits on Fox News and even across the Atlantic on ITV.

However, he seemed to take it in stride and offered some astute and pithy tweets about CNN and their bias: 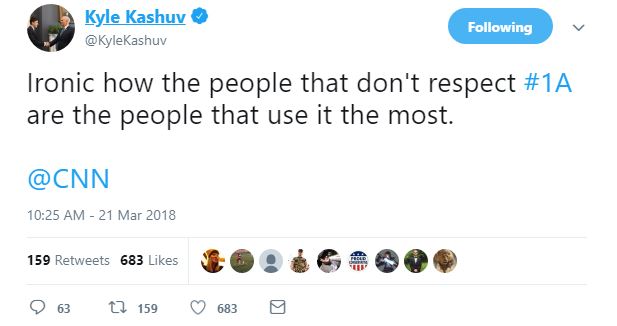 As for his retweet of Travis, Kashuv argued that “I am sure CNN is truly bothered by my RT” in which Travis called out Baldwin. The Parkland junior sarcastically added that CNN “would NEVER let name calling on their network” and “[j]ust ask the people that called others murderers for no reason” as “[t]hey were vehemently rebutted” except, “they weren’t.”

This was in reference to the repeated acts of incivility and petulance by his radical classmates on CNN in which Dana Loesch, gun rights supporters, and the NRA were referred to as murders, on par with the school gunman, and insufficient parents to be able to care for their children.

Whether it was Jake Tapper, Alisyn Camerota or Carol Costello at sister network HLN, the students have yet to be seriously challenged for their ugly rhetoric.

Alas, Kashuv’s retweet of Travis was a bridge too far and too insulting for Baldwin to allow on her two-hour show. Her show on Wednesday spent time slamming Fox News and obsessing over the NSFW lie detector questions Stormy Daniels faced a decade ago, but not Kashuv.