By Don Lemon’s Twisted Logic, Should We Blame MSNBC for Scalise Shooting? 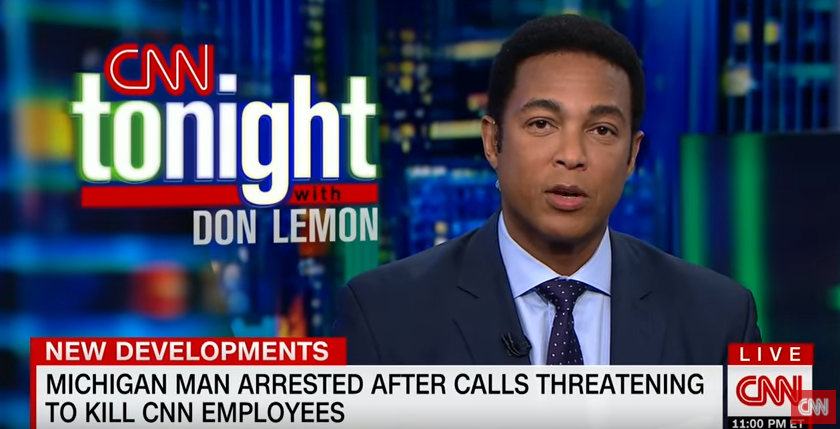 The headline was everywhere. Here’s just one from right here at NewsBusters:

But NewsBusters wasn’t alone, as noted. Google some version of this headline and it was, as it were, everywhere in both conservative and liberal media.

The essence of the story is that, as Mediaite explained here one “reported Hitler-fan Brandon Griesemer, allegedly called CNN 22 times this month before his arrest claiming he was ‘coming to gun you all down’ and referring [to] the network as ‘fake news.’”

“There’s nothing random about this. Nothing. This is what happens when the president of the United States, Donald Trump, repeatedly attacks members of the press simply for reporting facts he does not like. I’ve heard from a number of very credible sources from within the White House that you watch this show. So, Mr. President, I’m going to speak directly to you: The caller who threatened to kill CNN employees made his threat using these words: ‘Fake news.’ … I wonder where he got those words.”

Actually, as the Merriam-Webster dictionary wizards have pointed out: “Fake news appears to have begun seeing general use at the end of the 19th century.” But one can safely assume that the would-be CNN shooter was unaware of this. (Ya think?)

But that really isn’t the story here. The real — and quite dangerous — story here is that Don is saying that “reporting facts” the President doesn’t like has resulted in a presidential response (“fake news”) that has in turn generated a threat to CNN employees.

Why is this dangerous?  Look no further than this quote:

“One of my favorite TV shows is The Rachel Maddow Show on MSNBC.”

Who said that? Actually it was the lead sentence in a letter to the letters section of the Belleville News-Democrat, the paper of record in Belleville, Illinois. Who wrote it? That would be left-leaning James Hodgkinson, the man who shot and almost killed the Trump-supporting Congressman Steve Scalise while wounding several others as they practiced for a congressional baseball game between Republicans and Democrats in Alexandria, Virginia.

MSNBC, of course, not to mention Rachel Maddow, is not a Trump fan. Like CNN and Don Lemon, MSNBC and Rachel Maddow doubtless views themselves as “reporting facts” President Trump does not like. Mr. Hodgkinson, by his own admission, was a serious Maddow fan. He had been watching regularly, he listened to the constant stream of Maddow’s anti-Trump rants, then drove to Virginia, took out his gun and started shooting.

Question based on Don's logic: Was Rachel Maddow and MSNBC responsible for the shooting (and near death) of Congressman Scalise and the wounding of the others on the field that day?

With respect, that is ridiculous. There is one person — and one person alone — who was responsible for that deadly crime. And that would be the shooter, James Hodgkinson. To believe otherwise is to suggest in the most unacceptable fashion that Maddow should lose her show and MSNBC removed from the air. And that is dangerous.

The President of the United States — whomever that may be — is surrounded by agents of the United States Secret Service. For an obvious reason. Four presidents have been assassinated and four others — FDR, Truman, Ford and Reagan — have been attacked by gun toting assailants, with Reagan being the only one of the four who was hit and injured.

There is not an assassin or would-be assassin of presidents in history who had a relationship with the man they killed. They were not infuriated ex-best friends or acquaintances. So how did, say, John Wilkes Booth or Lee Harvey Oswald or John Hinckley know anything about Abraham Lincoln, John F. Kennedy or Ronald Reagan? The answer is obvious. They knew of their targets courtesy of the media of the day. In the case of Lincoln that meant newspapers, for Kennedy and Reagan newspapers had been joined by radio and television coverage. And in all cases, of course, not all of that coverage of the president in question was favorable.

Which is another way of saying that as in the case of Scalise-shooter James Hodgkinson what all of these people believed about their targets came about because of what they read, saw or heard in the media. My former colleague Don Lemon —  whom I both respect and like even if we don’t agree — has used his air time to among other things call President Trump a “racist” and more.

So a question. If, God forbid, someone gets through that cordon of presidential security and hurts or worse President Trump - and America learns the perp was a big fan not of Rachel Maddow and MSNBC but Don Lemon and CNN? Then what? Does Don Lemon lose his show, his career ruined? Should CNN be banished from the cable waves?

To suggest otherwise — to blame Griesemer on of all people a President of the United States who uses his free speech rights to give as good as he gets from the free speech of CNN and other media outlets — is dangerous.

Dangerous to free speech - not to mention ultimately very, very dangerous to a free press itself.