The Real Collusion: The Media and the Washington Political Class 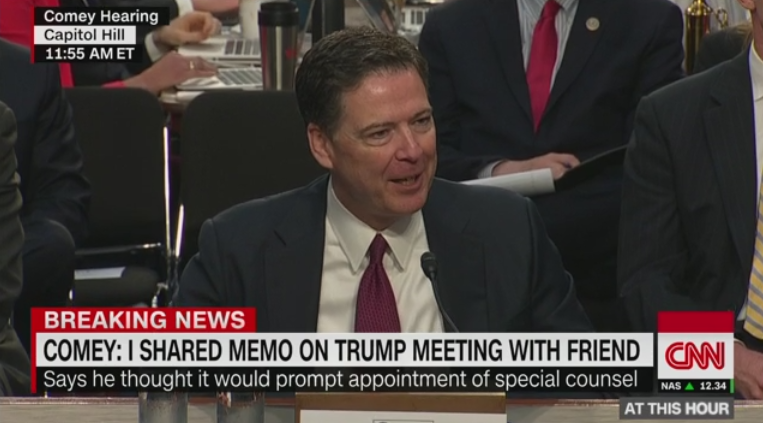 Last week, astoundingly from ex-FBI Director James Comey of all people, we learn this of his look into the Hillary Clinton e-mail fiasco.

“At one point the attorney general had directed me not to call it investigation, but instead to call it a matter, which concerned and confused me.”

A look back into the mists of the Obama era and we find stories like this one, as headlined here for a George Will column: "Obama’s politicized IRS can’t be explained away."

Will began this March 2014 column thusly:

WASHINGTON — What’s been said of confession — that it is good for one’s soul but bad for one’s reputation — can also be true of testifying to Congress, so Lois Lerner has chosen to stay silent. But hers is an eloquent silence.

The most intrusive and potentially most punitive federal agency has been politicized; the IRS has become an appendage of Barack Obama’s party. Furthermore, congruent with exhortations from some congressional Democrats, it is intensifying its efforts to suffocate groups critical of progressives, by delaying what once was the swift, routine granting of tax-exempt status.

So, the IRS, far from repenting of its abusive behavior, is trying to codify the abuses. It hopes to nullify with new rules the existing legal right of 501(c)(4) groups, many of which are conservative, to participate in politics.

Back there in 2015, Mark Levin - in his role as the head of the Landmark Legal Foundation - went after the Obama EPA for a lack of transparency. As reported by Brent Bozell and Tim Graham in their column here at NewsBusters:

The entirety of the Obama Era is marked by secrecy, obfuscation, and if all else fails, sheer dishonesty. Even allies in the network news acknowledged on Tuesday it was a damaging story that Secretary of State Hillary Clinton had never used a public e-mail account during her four-year tenure at Foggy Bottom.

What is it about these elites that they believe rules just don't pertain to them?

But even then, the reporters didn’t seem to admit this was an Obama administration problem, not just a Hillary problem. On the same day, news was breaking in The Washington Times that Mark Levin’s Landmark Legal Foundation had spurred federal judge Royce Lamberth to broadside the Environmental Protection Agency that the Freedom of Information Act is for all citizens, not just your biggest supporters. EPA dragged its feet on Landmark’s requests for documents – especially before the 2012 election – and generally treated them like pond scum.

‘The recurrent instances of disregard that EPA employees display for FOIA obligations should not be tolerated by the agency,” the judge said. “It is plain to this court that EPA perceives Landmark as an enemy....This court would implore the executive branch to take greater responsibility in ensuring that all EPA FOIA requests — regardless of the political affiliation of the requester — are treated with equal respect and conscientiousness.’

So what do we have here? We have the new Comey details out of the Obama Justice Department and FBI. The whole sordid Obama IRS mess. And for good measure, the Mark Levin-Obama EPA showdown.

Hello?  What is the central story here that the media seems to be missing as the Comey testimony is digested?

What we are seeing on vivid display here is how Washington’s insiders  - the political class - play their game. The person in charge of the Department of Justice instructs the FBI Director to literally change the meaning of words that magically transforms an FBI “investigation” into a mere “matter” in the name of accommodating a sympatico presidential campaign. The IRS is used, in Will’s words, “to suffocate groups critical of progressives, by delaying what once was the swift, routine granting of tax-exempt status” - thus politicizing it. And a federal judge admonishes the EPA that it has to be fulfilling FOIA requests “regardless of the political affiliation” of the group asking for them.

We also learned this from Comey, as reported by Yahoo:

And Newsweek wrote up this Comey escapade this way:

Speaking before the Senate Select Committee on Intelligence, Comey testified that after Trump tweeted about the possible existence of ‘tapes’ of their conversations, he ‘woke up in the middle of the night’ and realized he might be able to use memos he had recorded to share his version of events. ‘My judgement was, I need to get that out in the public square,’ he said. He added that he provided the memo to a friend who is a Columbia University professor.

Comey did not name the friend, but Columbia Law School professor Daniel Richman reportedly confirmed he is that person to the Financial Times and CNN. In an email to Newsweek, he declined to comment.

Richman’s faculty webpage says he is ‘currently an adviser to FBI Director James B. Comey.’ The New York Times previously quoted Richman in multiple articles about the former FBI director, around the same time the newspaper published the Flynn article. A New Yorker article in May quoted him and described him as Comey’s ‘unofficial media surrogate.’

The FBI  — the FBI! — the Department of Justice, the IRS, the EPA (and who knows what else) have all been touched by corruption if not overtaken and completely subsumed by it. Is it any wonder that large chunks of the American people have come to have a serious distrust of the way Washington operates? And that consequently come hell-or-high water they not only went out of their way to elect Donald Trump in the first place but are now resolutely sticking by him in the face of the media’s open warfare on the President.

But even more to the point? Is it any wonder those same American millions have a perhaps even more serious distrust of the mainstream media?

Leave it to the New York Times to headline this story over the weekend.

A Pro-Trump Conspiracy Theorist, a False Tweet and a Runaway Story

The story revolves around the idea that the “far right” is being filled with fake news from Twitter person A, which is also discussed by web site B and radio show C. All this leading to misinformation from, but of course, Rush Limbaugh and Sean Hannity and heaven knows  who else all the way up the information food chain to the President himself.

There is no attempt here to unravel all of the Times story. The point - unless one is the liberal media - is obvious. How did anybody - a right-leaning Twitter guy, a website, a radio host much less Rush Limbaugh and Sean Hannity and the whole lot more that comprises what is now known as conservative media come into existence in the media world in the first place? The answer is equally obvious.

The reason for the existence of conservative media is that the liberal media, the mainstream media if you like, simply did not do its job.  Or, more plainly, bluntly refused to do their job. And the media coverage of the Comey story not to mention the Obama-era Department of Justice, the FBI, the IRS and the EPA is nothing if not a testament to the fact.

Was the FBI Director corrupt? Was he leaking FBI documents to buddies and cronies in the media and out? Was the Department of Justice playing fast and lose with the Hillary Clinton episode? What about the IRS? The EPA? Yes to all. And how does all of this and so much more illustrate exactly what’s wrong with the Washington political class?

These are the kind of stories that never or rarely see the light of day in the mainstream media. And there is a reason for it. The mainstream media is part of the Washington political class. In today’s situation they have exhibited nothing so much as contempt - and, importantly,  - contempt not just for the current President but for the millions of Americans stretched across what Rush calls the “fruited plains” who elected him in the first place.

All of which means that as James Comey recedes into the political rearview mirror, he will be replaced by someone else and someone else and someone else in the mainstream media spotlight, all with the ultimate goal of taking this President out. Out of favor, out of office and ultimately out of history in any fashion that portrays him as the equal of any of the other 45. And in that pursuit, whatever needs to be reported in the mainstream media- or, more importantly, not reported - will be dealt with accordingly.