By the NYT’s Own Standards, Paper Should Hold Obama Responsible for Spying 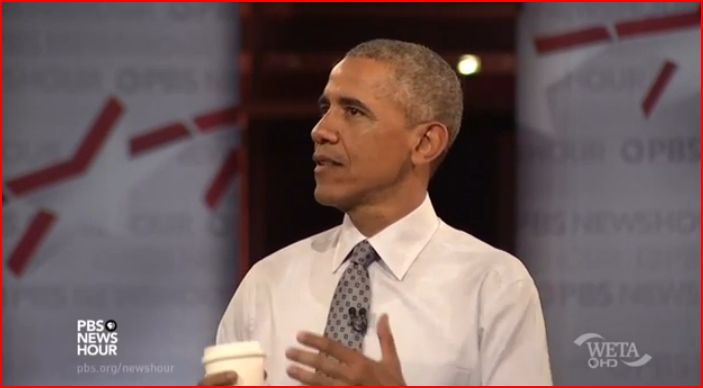 Fact: The administration of President Barack Obama surveilled the campaign associates of the President’s political opponent, Donald Trump. Then the classified information gained was leaked to the press - repeatedly. All of which furthered a liberal narrative that Trump colluded with the Russians to steal the 2016 election from Hillary Clinton.

How do we know? Because the New York Times says so.

This week White House Press Secretary Sean Spicer went in to considerable detail - specifics - on press reports of Obama spying on Trump. Yet time after time after time the media across the board - yes, even Fox News - just blatantly ignored the evidence and, worse, insisted there was none. More astoundingly, Republican members of Congress are denying outright that the evidence that is right in front of them - presented in detail by the New York Times and others - even exists.

The irritating-to-the-media fact that talk radio’s Mark Levin broke through this media dam of denial was momentarily dealt with by the media - and dismissed. So, it’s time for a “for-the-record” listing of the specifics that the media is quite deliberately ignoring - specifics that show beyond doubt that, yes indeed, the New York Times has documented in chapter and verse that the Obama Administration - the very same administration that surveilled the e-mails of Fox correspondent James Rosen, tried to force New York Times reporter James Risen to reveal his sources for a CIA-related book - and, notably - had to apologize to an irate German Chancellor Angela Merkel for allegedly surveilling her cell phone - did in fact conduct surveillance of Trump associates. (Note: Reporter Risen called Obama the  “Greatest Enemy To Press Freedom In A Generation”.)

Here’s another fact. When the president is not Barack Obama, the New York Times delights in holding presidents accountable for anything and everything that goes on in their administrations. Especially if their name is Reagan or George W. Bush.

In the Reagan era, there was the Iran-Contra affair, which involved a convoluted scheme by some administration officials to trade arms for hostages and use the monies received from Iran to fund the anti-Communist Nicaraguan contras. The President had no knowledge of this. Yet he was pounded by the New York Times  - and many others - in the media to take responsibility for what happened. Examples:

The Times raged on in a December, 2, 1986 editorial about “President Reagan and His Operators,” which began thusly:

“Against news of a startling plunge in his popularity, President Reagan has gone from blaming the press for the Iran arms scandal finally to some constructive steps to end it.”

Got that? The Times is saying that instead of blaming the press for holding him accountable for something others in his administration did without his knowledge, Reagan needed to get on with “constructive steps” to correct the problem that he, Reagan, was responsible for as chief executive.

In a Times editorial from November 22, 1987, the paper was once again holding Reagan personally responsible for something he did not know about or authorize.  Specifically the paper said that Reagan accepted “nominal responsibility” for the actions of others but he was “the man who made it all possible.” He was specifically accused of abusing the public trust even though there was no proof - none - that he had authorized the arms for hostages enterprise.

Then there was this Times editorial from March 6, 1987, titled: “The President and the Quagmire.” Among other things the Times said - bold print supplied:

“President Reagan still cannot pronounce the word ''I'' in the same sentence as the word ''mistake.'' If his speech about the Iran-contra scandal Wednesday was intended as a confession of error, his heart wasn't in it. He sounded at times like a man who's sure he hasn't done anything wrong -and promises never to do it again.

But despite some grudging, fudging aspects, Mr. Reagan's appearance brought a welcome advance. With this speech he accepted, and demonstrated, responsibility.”

Got that? Reagan didn’t do anything wrong. He didn’t know what had been done in his name. But be that as it may, these were the actions of people in his administration and therefore he had to make sure he stood up in front the nation and the world and “accepted, and demonstrated, responsibility.”

Lest one think this was just the Times posture of always holding Reagan accountable for the actions of his administration even when he was unaware of them, the Times made it a point to apply the same standard to George W. Bush. On May 14, 2004, the Times, in an uproar over the discovery of the mistreatment of prisoners by American soldiers at the Iraqi Abu Ghraib prison demanded that “Mr. Bush and his Republican allies in Congress should stop trying to evade responsibility by accusing those who want to ask tough questions of being disloyal to the troops and the war effort.”

In other words? While those soldiers in Iraq may have done the actual deed of mistreating prisoners without President Bush’s knowledge much less assent, the ultimate person responsible for Abu Ghraib was Bush himself - and he needed to promptly “stop trying to evade responsibility,”

Now come Times stories like the following, all of which took place during the Obama administration:

WASHINGTON — American law enforcement and intelligence agencies are examining intercepted communications and financial transactions as part of a broad investigation into possible links between Russian officials and associates of President-elect Donald J. Trump….

The F.B.I. is leading the investigations, aided by the National Security Agency, the C.I.A. and the Treasury Department’s financial crimes unit. The investigators have accelerated their efforts in recent weeks but have found no conclusive evidence of wrongdoing, the officials said. One official said intelligence reports based on some of the wiretapped communications had been provided to the White House.”

Full stop right there. The Times is saying in plain English that “law enforcement and intelligence agencies” are conducting “a broad investigation into possible links between Russian officials and associates of President-elect Donald J. Trump…”

Question: Who exactly do these “law enforcement and intelligence agencies” and the cited FBI, National Security Agency, CIA and Treasury Department’s financial crimes unit work for? Answer? Just as those involved in the Reagan-era Iran-Contra affair worked for President Reagan, and those soldiers at Abu Ghraib prison were the responsibility - per the Times - of President George W. Bush so too are all the people involved in the agencies listed above by the Times the responsibility of the sitting president of the day - President Barack Obama. Which is to say, members of the Obama administration were using, per the Times, “wiretapped communications” of  “associates” of Obama’s political opponent - identified by the Times as “President-elect Donald J. Trump.”

But the Times wasn’t done making this case that the Obama administration had in fact wiretapped or surveilled (and to be clear, wiretapping is a form of surveillance).

WASHINGTON — In the Obama administration’s last days, some White House officials scrambled to spread information about Russian efforts to undermine the presidential election — and about possible contacts between associates of President-elect Donald J. Trump and Russians — across the government. Former American officials say they had two aims: to ensure that such meddling isn’t duplicated in future American or European elections, and to leave a clear trail of intelligence for government investigators.…

Again? Who was the sitting President of the United States while all of this surveillance of Trump “associates” were being conducted? And reported right there in the Times? A paper presumably read by the White House staff at a minimum if not the President himself? That’s right: President Obama.

It boggles the mind that the media - not to mention Republican members of the House and Senate Intelligence Committees - are saying they have found no evidence that the Obama administration was using surveillance to spy on President Trump. Let’s not play games and say that “associates” of the President somehow are not the President.

Note well the irony here. Already every word or deed from someone somewhere in the newborn Trump administration has the media holding President Trump himself responsible for whatever was said or done. When press secretary Sean Spicer appeared in the White House press briefing room to scorch the press for its inauguration coverage - the Times blamed the President. It may be a high profile adviser - Spicer, Steve Bannon or Kellyanne Conway today or during the campaign Corey Lewandowski - or it could be some fringe supporter involved in some fracas out there  on the trail. It could be an unwated endorsement from David Duke.  No matter, the Times and the rest of the media hold and held Trump himself personally responsible.

But Barack Obama? The central figure in a blossoming scandal that had  - per the New York Times - members of his administration wiretapping or otherwise surveilling his opponent’s “associates”? Well, yawn, no big deal.

One can only wonder whether members of Congress read the Times reporting. Or whether Times reporters themselves have read their own work. One wonders what Shep Smith over there at Fox News has possibly been thinking when he says “Fox News knows of no evidence of any kind that the president of the United States was surveilled at any time in any way, full stop.”  Here’s a bulletin from the New York Times, Shep:

“ American law enforcement and intelligence agencies are examining intercepted communications and financial transactions as part of a broad investigation into possible links between Russian officials and associates of President-elect Donald J. Trump…”

Those “intercepted communications and financial transactions” from Trump “associates” working for Obama’s political adversary were in fact reported by the Times as intercepted by the Obama administration.

Words matter. And the New York Times - which stands by the words in its reporting on this and refuses to back away - has produced something else besides words.

Memo to the larger media, Speaker Ryan and the House and Senate Intelligence Committees? That something else is called “evidence.”