You were waiting to settle in for Super Bowl 50. Can Peyton Manning pull it off? Can Cam Newton play under Super Bowl pressure? These and the usual other Super Bowl conversations are waiting to be had  -- the thumbs up or down on the halftime show, who had the best commercial. Nothing unusual there.

So amid all the usual Super Bowl hype, a welcome hype that momentarily distracts from the intensity of the presidential campaign, why not play the race card?

You got it. Over there at the Huffington Post,  the topic isn't quarterbacks or commercials. In liberal media land? Are you kidding? No.

Here's the headline on the story by one Erick Fernandez, an  Editorial Fellow,at HuffPost Sports. The headline?

The Panthers Are The Most Unapologetically Black Team In NFL History
And it's awesome. 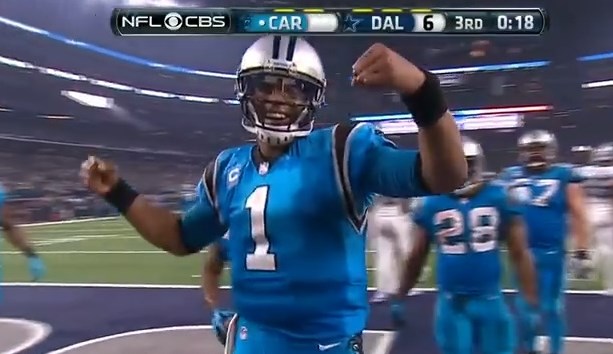 The culture of football is such that a league made up of mostly black men is supposed to comply with certain standards created and enforced by mostly white men. Ideally, the players would act subdued in public, celebrate their achievements quietly and speak in a manner that avoids the spotlight.

The Carolina Panthers haven't done any of that this season. On the way to a 15-1 regular season record and the team's first Super Bowl appearance since 2004, the team has had fun and has been fun to watch.

They have talked loudly, danced loudly and celebrated loudly. But they've done something significant along the way, too: The Panthers have embraced, demonstrated and exuded aspects of their blackness in a way that few predominately black teams have done in the past.

They have been wonderfully, unapologetically, proudly black.

Got that? The Carolina Panthers aren't about football. They're about race. Well I'll be damned. And I thought this was a sports team instead of some left-wing identity politics clique carrying on the worst traditions of the American Left - the skin-judging heritage of slavery, segregation, lynching, the Klan and oh so much more. (Can you say illegal immigration and racial quotas?)

Apparently people of other races - actually (newsflash to HuffPo) there is only one race in America, going by the name "human" or, quaintly I know, "Americans" - don't talk, dance or celebrate loudly. Hello? Has the Huff Po ever heard of former Pittsburgh Steeler Terry Bradshaw, a legendary loud, celebrating, partying kinda guy?   Who in his entire career never wasted a moment of anyone's time celebrating his "whiteness"? Or how about Broadway Joe Namath of the New York Jets, famous for out-there long, flamboyant (and white!) fur coats?   Suffice to say, as a young and quite single quarterback in New York Joe didn't get his nickname of "Broadway" for doing anything off the field quietly. A good bit of Joe's off-field antics ended up in the  pages of New York tabloids, as here  (where he holds a presser in his underwear), or here where he poses half naked for a commercial with Farrah Fawcett.

By coincidence the HuffPo article playing the race card with the Panthers comes at the same time Ted Cruz and Marco Rubio placed, respectively, first and third in the Iowa Caucuses, with Ben Carson coming in fourth. Which is to say, three of the top four vote getting candidates in Iowa - the same Iowa that is frequently dissed as not "representative" of America because it is heavily populated by whites - are two Latinos and a black doctor. And of Cruz and Rubio, as NB's own P.J. Gladnick has headlined:

NYT Column: Cruz & Rubio Not Really Latino Because Not Liberal

That's right. The New York Times ran this jewel of a column by one Roberto Suro, a former "objective" reporter turned professor of public policy and journalism at the University of Southern California, in which Suro noted that:

DEFYING most polls and predictions, a Latino won the Republican Iowa caucuses, and another Latino came in third. Together, they won more than half the vote. With Senator Ted Cruz taking nearly 28 percent of the vote and Senator Marco Rubio getting 23 percent, each vastly surpassed the results for any other Latino candidate in any previous United States presidential contest.

How is that not being celebrated as historic or at least worth a headline for a day or two?

The answer is not that complicated: Neither Mr. Cruz nor Mr. Rubio meets conventional expectations of how Latino politicians are supposed to behave.

Neither of these candidates claims to speak for the Hispanic population or derive a crucial portion of their support from Hispanics, and neither bases much of his political identity on being a Latino. To varying degrees they oppose legalization for unauthorized immigrants, a policy that is central to most organized Latino political interests and that is supported by a great majority of Latino elected officials and Latino voters.

No less an arbiter than Jorge Ramos, the Univision anchor, seemed to condemn them without naming names in a column last month. "There is no greater disloyalty than the children of immigrants forgetting their own roots. That is a betrayal," he wrote."

Catch that quote from Jorge Ramos? "There is no greater disloyalty than the children of immigrants forgetting their own roots. That is a betrayal."  Ahhhh Jorge. Spoken with all the racial obsessiveness of David Duke.

What is the matter with these people? Can't the rest of the country -- Americans one and all regardless of color -- just kick back and root for their favorite team without having the Super Bowl made into a racial contest?  No one is writing columns saying that Donald Trump should be nominated because his paternal grandparents came from Germany. Of all the arguments advanced for and against Trump, none is about the need to nominate or defeat him because he's of German descent. Much less has anybody said he should be president because he's white.

The real fact here -- sad and disgusting as it is -- is that the American Left and leftist media outlets like the HuffPo and the New York Times insists on dividing Americans by race, as they have done since they first enthusiastically used slavery to build the political base that became the Democratic Party. No skin color judging, no identity politics -- and the rocket fuel that propels the race-driven progressive movement turns into useless sludge.

So.  As you get ready for a night of popcorn and a few cold ones, just remember. To be politically correct you must understand that you're not really watching two talented American quarterbacks named Peyton and Cam duel up and down the length of Levi's Stadium in Santa Clara.

No. What you're really watching is a white guy named Manning try to beat black guys who have "talked loudly, danced loudly and celebrated loudly" because they are black and who are "wonderfully, unapologetically, proudly black."

I'll be settled in to watch. Wonderfully, unapologetically and proudly American that I am.