Olbermann to Daily Kos Audience: 'Send Me Everything You Can Find About Glenn Beck' 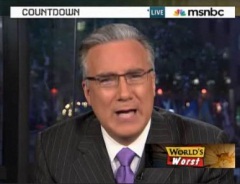 Guess who's not pleased about Van Jones middle-of-the-night-on-a-holiday-weekend resignation? Perhaps you never would have seen this one coming, but no other MSNBC "Countdown" host and provocateur Keith Olbermann himself.

"I don't know why I've got this phrasing in my head, but: Find everything you can about Glenn Beck, Stu Burguiere, and Roger Ailes," Olbermann wrote. "No, even now, I refuse to go all caps. No, sending me links to the last two Countdowns with my own de-constructions of his biblical vision quality Communist/Fascist/Socialist/Zimbalist art at Rockefeller Center (where, curiously, he works, Comrade) doesn't count. Nor does sending me links to specious inappropriate point-underscoring prove-you're-innocent made-up rumors."

Olbermann said he plans to put forth his formal plans to go after Beck on his Sept. 8 show.

"Tuesday we will expand this to the television audience and have a dedicated email address to accept leads, tips, contacts, on Beck, his radio producer Burguiere, and the chief of his tv enablers, Ailes (even though Ailes' power was desperately undercut when he failed to pull off his phony ‘truce' push)," Olbermann wrote.

It's not clear what Olbermann's goal is here, but it does appear he's some how trying to employ the thirteenth rule from the tactics chapter from Saul Alinsky's "Rules for Radicals" - "Pick the target, freeze it, personalize it, and polarize it."