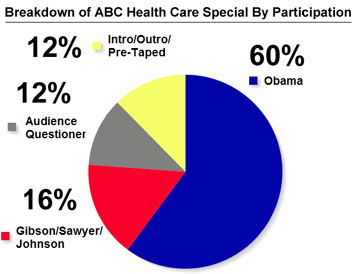 Call this a teachable moment, but even with ABC's best-laid plans to kickstart the debate about health care reform and not allow the "Prescription for America" special to become an "infomercial," as many have complained - the president spent more than twice as much time as his questioners vaguely answering or not answering the questions asked of him. But the network consistently presented the event as part of the need to fix a "broken system." When asked, every one of the 164 hand-picked audience members said they felt that health care needed to be changed.

While Obama had to field some difficult questions -- from the audience and ABC -- he faced no Republican critics of his proposals. The network also allowed him to dominate the program with long-winded and vague answers. Out of the 75 minutes the network dedicated over the two programs (commercials excluded), the president managed to take 60 percent of that time: 45 minutes to give 19 vague responses - not exactly the "dialogue" advertised by ABC:

In fact, at one point, the president went on for four minutes and 33 seconds to answer a question about government interference, the "Big Brother fear" as the questioner put it and how it would be paid for. In the next segment Gibson pleaded with the president to keep his response to the next question shorter.

Obama was also granted the opportunity to deliberate over two of the audience questions during the commercial breaks. And the initial hour-long program never even addressed some of the most debated aspects of health care because Obama consistently ran long and was unchecked by the hosts. And while some of the members of the audience asked challenging questions, not one Republican critic of Obamacare was given a chance to be heard. Gibson did attempt to question the president about such critics, but no Republican voices were allowed to speak for themselves.

Saving the Most Controversial for Last

In addition to Obama's longwinded responses, the ABC special left the most critical questions until the "Nightline" portion of the segment - after a 30-minute break for local news and likely fewer viewers.

One of the biggest points of contention opponents of government's involvement in health care has been the threat that it would crowd out private health insurance providers by creating market forces they couldn't compete with - or what Aetna Insurance president Ron Williams called it as part of the town hall: "introducing a new competitor that has rulemaking ability, the government would have."

While William's was introduced as an audience questioner he actually faced a question from Sawyer, which wound up being a populist rant critical of his industry and emphasizing the president's claim that insurance companies need to be "kept honest."

"If I could, I'm going to bring in Ron Williams from Aetna, CEO of Aetna, and if I can reverse the order a little bit Mr. President, I'd like to ask a question of him and then let you comment on his answer," Sawyer said. "Mr. Williams, Aetna, to take one, an insurance company. We hear people all over the country people see their premiums going up 119 percent in the last several years. They see the profits of the insurance companies, the billions and billions of dollars, even in a lean year. They see profits in the billions of dollars. Is the President right - that you need to be kept honest?"

Despite Gibson, Sawyer and some audience members' tough questions, the president remained optimistic throughout his 45 minutes of the ABC broadcast and said health care reform would be resolved assuming he gets the support of the American people. He even claimed "the stars are aligned" to get this done.

"The answers are yes to all of that, and if the American people get behind us, this is going to happen," Obama said, getting the last word from ABC.