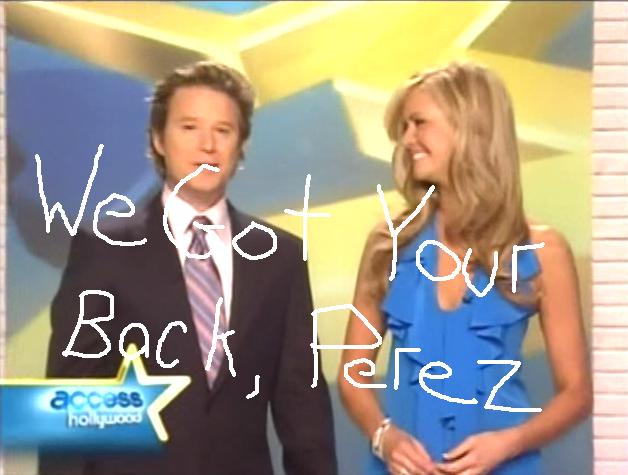 Is Donald Trump angry at Miss California Carrie Prejean? Or is it just another trumped up charge from the liberal media?

The April 22 episode of "Access Hollywood" teased viewers that Miss California was under a serious threat of losing her crown - since she was late for a meeting with Donald Trump, the organizer of the Miss USA pageant in which Prejean was the runner-up, and that her position on same-sex marriage somehow contradicted what Miss California's position was supposed to be.

"New and serious trouble for Miss California you will only find out here," "Access Hollywood" co-host Nancy O'Dell announced in the show's teaser.

(Video embedded below the fold)

"Access Hollywood" co-host Billy Bush seemed to think it was a big deal Prejean was late for an appointment with Trump.

"Our camera caught her marching in the Donald's office - late, and that made Trump a grump," co-host Billy Bush reported. "Twenty minutes late to meet the very punctual Trumpster, maybe not a great start for Miss California's Carrie Prejean."

However, upon leaving the meeting, Prejean gave no indication of having been admonished.

The segment featured footage of "Access Hollywood" reporters peppering Prejean with questions, undeterred by the fact that most of them had already been asked and answered during her many national TV appearances.

"Access Hollywood" also interviewed Keith Lewis, the co-executive director of Miss California USA. He told Bush he disagreed with Prejean's view of same-sex marriage, and hinted that he would like to see Prejean take another course with her political views, but her state crown was safe.

"You know, she will continue as long as she is able to serve our state and right now she's speaking from Carrie Prejean's position," Lewis said. "And hopefully real soon, she's going to be back speaking from Miss California's position."

But technically, Prejean is speaking from Miss California's position - or at least the position of a majority of Californians. In November, California voters adopted Proposition 8, which established marriage as a union between a man and a woman, by a 52 percent to 48 percent margin.