WaTimes Warns Climate Change Bill Has a Cost: $494 a Year for Every U.S. Man, Woman and Child 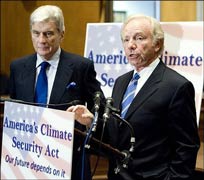 What's another $500 taken out of your paycheck over the course of a year? It probably isn't much to global warming alarmists like Al Gore, but that's what it could cost you if legislation pending in the U.S. Senate is passed into law.

Does that $500 have your attention? Well, multiply that times every member of your immediate family.

According to a November 11 Washington Times editorial, a bill introduced in the Senate by Sens. Joe Lieberman (I-Conn.) and John Warner (R-Va.) that would require companies to scale back greenhouse-gas emissions could cost Americans $4 trillion to $6 trillion over the next 40 years.

If that bill were passed and made law, the tax would cost every man, woman and child - more than 303 million Americans - $494 a year, a significant burden on the U.S. economy.

If you're not yet skeptical of this global warming initiative, listen to former Federal Reserve Chairman Alan Greenspan, who warns the effects of carbon caps would be limited unless imposed globally. He said in his book, "The Age of Turbulence," that caps imposed only on the United States could be detrimental.

"There is no effective way to meaningfully reduce emissions without negatively impacting a large part of an economy," Greenspan wrote. "Net, it is a tax. If the cap is low enough to make a meaningful inroad into CO2 emissions, permits will become expensive and large numbers of companies will experience cost increases that make them less competitive. Jobs will be lost and real incomes of workers constrained."