Freshman Rep. Alexandria Ocasio-Cortez, D-N.Y., has many policy ambitions, among them she floated the idea of hiking the top tax rate to a whopping 70 percent to pay for a “Green New Deal.”

Although a chorus of media liberals defended and even applauded the socialist’s “soak the rich” suggestion, some high-profile economists opposed it because it would harm the economy. A CNBC reporter also found that even that tax hike wouldn’t come close to paying for a Green New Deal scheme.

Greenspan: ‘Government Intervention Has Been So Horrendous' Businesses Can’t Plan For Future

Appearing on CNN’s Fareed Zakaria GPS, Greenspan said, “[T]he level of uncertainty about the very long-term future is far greater than at any time I particularly remember.” He blamed it on “government intervention [that] has been so horrendous that businesses cannot basically decide what to do about the future” (video follows with transcript and commentary):

NB Interview: Peter Schiff on Media and the Economy, OWS

For conservatives, one of the bright spots of the Occupy Wall Street protests was when millionaire investor Peter Schiff went down to Zuccotti Park with video camera and a sign reading "I Am The 1% - Let's Talk."

On Tuesday, I had the pleasure of speaking with Schiff by telephone in a sweeping interview about his experience at OWS, how the financial media are doing, and ending with his rather frightening view of the economy and the future of our nation (video follows with transcript):

It often amazes that liberals in this country revere New York Times columnist Paul Krugman as being an expert economist.

Take for example Friday's intellectually challenged piece entitled "Bernanke's Perry Problem" in which the Nobel laureate accused prominent Republicans such as the Texas governor and Wisconsin Congressman Paul Ryan of preventing the Federal Reserve chairman from enacting monetary policy that would save the economy:

Greenspan on Meet the Press: No Chance of Default. Really?

We've just spent the past month or so having politicians and the press tell us that if there was no debt-ceiling deal by August 2, the government might default on its debts (of course, Tim Geithner and Barack Obama could indeed have strategically defaulted if they had wished, but work with me here).

But Sunday on Meet the Press, in a remark I expect will not be relayed much if at all by the rest of the establishment press, Alan Greenspan said that default is impossible -- which puts him directly at odds with the rest of Washington's elites and Ben Bernanke, his successor as Federal Reserve chairman. On July 14, Bernanke said: "A default on ... (U.S. Treasury) securities would throw the financial system ... potentially into chaos."

Wait until you see the reason why Greenspan says default is impossible, as carried at CNBC's web site in an item by Patrick Allen:

As NewsBusters has been reporting, the media have been on a full-court press in recent days supporting the President's push to raise taxes.

Doing his part was NBC's David Gregory who trotted out the words of former Vice President Walter Mondale on Sunday's "Meet the Press" to really drive home the point, and then got a huge assist from former Federal Reserve Chairman Alan Greenspan (video follows with transcript and commentary):

E.J. Dionne: 'Tax Cuts Add to the Deficit No Less Than Spending Increases Do'

What kind of an idiot must you be to believe that tax cuts have an equal dollar for dollar negative impact on a government budget as spending increases do?

The most obvious answer given the charge of this website is a liberal media member, and the Washington Post's E.J. Dionne nicely proved this point with his column Monday: 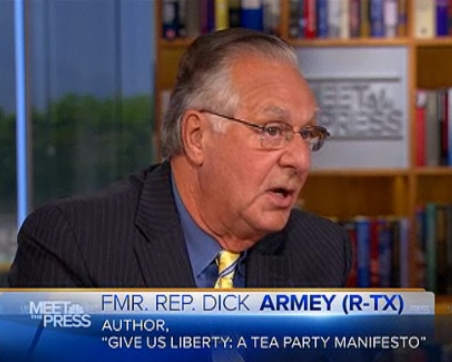 David Gregory on Sunday finally got an answer to his question about extending the Bush tax cuts, but it certainly wasn't what he was expecting.

For those that have been watching "Meet the Press" this month, the host has been grilling his conservative guests about this issue ever since former Federal Reserve Chairman Alan Greenspan told him on August 1 that tax cuts don't pay for themselves.

Having badgered Senate Minority Leader Mitch McConnell (R-Ky.) about this earlier in the program with no success, Gregory broached the subject with former House Majority Leader Dick Armey in a subsequent segment.

With a hanging curveball coming into his wheelhouse, Armey whacked a long drive that still hasn't landed (video follows with transcript and commentary): 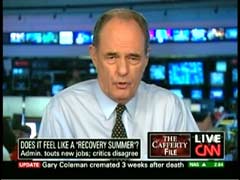 On Friday's Situation Room, CNN's Jack Cafferty tossed cold water on the Obama administration's "recovery summer" claims, stating that the "current recovery has been one of the worst for job creation ever." Cafferty also criticized the dangerous growth in the national debt, underlining that there "appears to be a rather serious disconnect," as the President requested billions in additional spending.

The CNN commentator began his 5 pm Eastern hour commentary with a contrast between Obama's "massive P.R. campaign" touting the apparent effectiveness of the $860 billion "economic stimulus bill" and the continuing high unemployment figure: "President Obama and Vice President Biden have kicked off a massive P.R. campaign, celebrating what they're calling 'recovery summer'....But the celebration may be premature. Just yesterday,  the Labor Department reported new claims for jobless benefits jumped by 12,000 last week- much sharper increase than was expected."

Cafferty touted a recent editorial in the Washington Times which "suggests the administration's 'make-work' jobs program has failed, and that those infrastructure jobs, which are being funded by the taxpayers, will disappear when the stimulus money runs out- soon." He bluntly continued, "Fact is the current recovery has been one of the worst for job creation ever."

As congressional Democrats press on with their attempts to get financial legislation reform passed, a key component has been lacking from the debate: how to handle the government-sponsored enterprises Fannie Mae (NYSE:FNM) and Freddie Mac (NYSE:FRE).

Although some Republican lawmakers have cried foul over the fact nothing has been included in a bill sponsored by Senate Banking Committee Chairman Sen. Chris Dodd, (D-Conn.), President Barack Obama's administration has vowed to pursue reforming the GSEs ... eventually.

However, despite a long history of alleged corruption, close ties to the current administration and a recent $10-billion extension of "emergency aid" to Freddie and Fannie in the deadest possible part of the news cycle, these two entities have gone relatively unnoticed by the news media, with a lion's share of the spotlight given to Wall Street bogeymen like Goldman Sachs (NYSE:GS).

Everyone is still looking for a scapegoat for the financial crisis that precipitated the current economic malaise. And one of the popular targets has been former Federal Reserve Chairman Alan Greenspan.

Greenspan recently testified on Capitol Hill and was pressed about how he may have contributed to the financial crisis. According to Suze Orman, host of CNBC's "The Suze Orman Show," some of the blame should go to Greenspan for a 2004 speech he made to the Credit Union National Association.

Greenspan had said some might have "saved tens of thousands of dollars had they held adjustable-rate mortgages rather than fixed-rate mortgages during the past decade," but he did preface it by saying that wouldn't have been the case if rates adjusted upwards as they did. But Orman, appearing on MSNBC's April 8 "Morning Joe" contended he shouldn't have commented on those mortgages at all.

Invoking the name of objectivist/libertarian writer-philosopher Ayn Rand, hardly a common citation in television news, ABC’s Jake Tapper, on Sunday’s This Week, confronted former Federal Reserve Chairman Alan Greenspan with how he recognized a “flaw” in his perspective as he had conceded “markets cannot necessarily be trusted to completely police themselves.” Tapper wondered:

But isn't it more than a flaw? Isn't it an indictment of Ayn Rand and the view that laissez-faire capitalism can be expected to function properly, that markets can be trusted to police themselves?

Of course, “laissez-faire capitalism” was not allowed to police itself by letting poorly-run firms fail (other than Lehman) and allowing rewards to successful for firms which did not make bad judgments. Greenspan rejected Tapper’s assumption: “Not at all.” He proceeded to point out “there is no alternative if you want to have economic growth and higher standards of living in a democratic society to have competitive markets.”