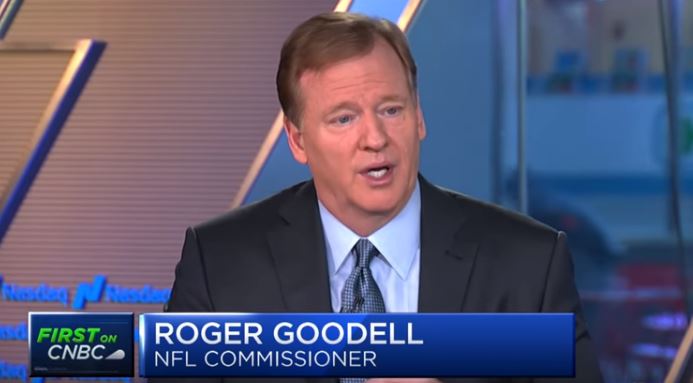 Raining down hard on Colin Kaepernick and NFL Commissioner Roger Goodell, the New York Post's Phil Mushnick is bucking the trend by media liberals to patronize the radical social justice warrior who "gamed" the NFL leader. Mushnick stiff-arms Goodell and Kaepernick for essentially spoiling the pro football experience for so many Americans.

It's no wonder that fabulously rich professional athletes have an "exaggerated, even fantastic sense of self-entitlement. ... They’re invited to live in a world that doesn’t correspond with our orbit," Mushnick courageously writes in the era of media adoration for social justice warriors in uniforms. Instead of shutting down the disrespectful protests, Goodell bowed to Kaepernick's hypocrisy from the time it started in 2016.

Mushnick provides a perspective that is 180 degrees away from what most of his colleagues have been offering up during the Kaepernick saga. It took a big turn last week when he and fellow kneeler Eric Reid reached a settlement with the NFL over their legal complaint of collusion:

"In the case of Colin Kaepernick, now over three years old, Goodell, as is his habit, avoided telling plain, practical, common-sense, good-for-all truths. Instead, he led with his feckless, patronizing, pandering make-it-go-away senses that only extended and exacerbated the issue."

At first Goodell ignored the anthem protests that began in 2016 and escalated in 2017. The NFL moved last May to disallow the controversial protests, then backtracked when the players' union squawked. Only a handful of players protested in 2018.

The NFL gave current and former players, who formed a social justice movement, the Players Coalition, $89 million for their efforts to influence prison reform and other agendas. As the NFL brand smoldered in controversy, Goodell fiddled. He attended a bail hearing in New Orleans for a man accused of committing an armed robbery. USA Today's Nancy Armour described his actions as joining with NFL players in the fight against social injustice. Goodell extended his good wishes — not to the victim of the crime — but to the grandfather of the alleged perp.

Mushnick says Goodell should have known from the start that anthem protests at NFL games were in everyone’s worst interests, including Kapernick’s. He says that instead of allowing Kaepernick’s game-day anthem activism, the NFL should have realized that it had to protect its $14 billion industry, paid Colin what he was owed and let him go. That would have set the proper tone:

"Soon Colin discovers that word of his on-the-job behavior has spread throughout the niche industry. He can’t find work with his previous boss’s competitors. With the industry having determined that he’s bad for business, Colin combats this sensible conclusion by suing for collusion.

"The court quickly dismisses the case as not merely frivolous but ridiculous."

"Kaepernick is not your standard protester of world conditions such as global warming or bear hunting. He doesn’t aspire to altruistic social change. At last word he’s not even registered to vote. He’s a fringe lunatic, radicalized in thought and deeds.

"His police brutality protests are appalling in that he apparently supports the brutalization — and worse — of police. He is a fundraising booster of Joanne Chesimard, now Assata Shakur, a Black Liberation Army member in exile in Cuba after her conviction for participating in the traffic-stop execution of New Jersey State Trooper Werner Foerster, who, at 34, left a wife and 3-year-old son."

"Goodell miss that? How? Why? Irrelevant? How about Nike, Kaepernick’s capitalist business partner and universal influence peddler?

"Kaepernick is also a conspicuous acolyte of communist revolutionary Che Guevara, whose sense of justice and free expression was to execute opponents — real or imagined — without trial, when, as researchers claim, he wasn’t holding a Nazi-style book-burning and issuing death warrants for Cuban writers who dissented with his ideology."

Mushnick is curious about why Nike doesn't support the courage of Kaepernick's convictions by selling socks depicting police as pigs, which is what Kaepernick wore during a San Francisco 49ers' practice session in 2016.

In the void of NFL leadership on this issue, Mushnick says, some people would have told Kaepernick from the start that "the NFL doesn’t owe him a living, so get lost and stay there. Better yet, go to hell. I would not have allowed him to game the game." But Goodell’s unwise NFL paid him off instead.