Frustration Boiling Over: Media Yell Louder for NFL to Bring Back Kaepernick 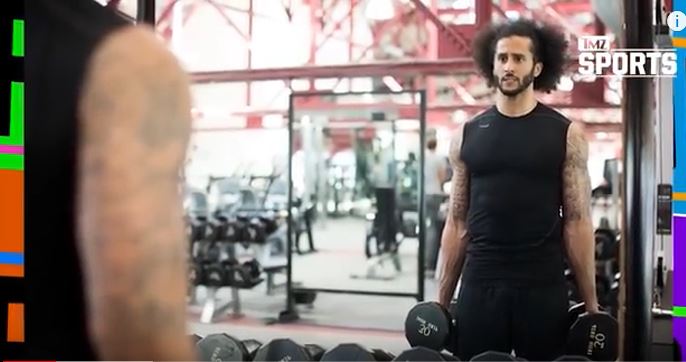 From the "if-you-won't-take-my-Colin-Kaepernick-advice-then-I'll-just-yell-a-lot-louder" files: With the NFL season at the midway mark, sports webs are staging yet another collective Colin Kaepernick rallying cry. The New York Daily News, TMZ and Deadspin are throwing hissy fits because unheralded quarterbacks are being thrust into starting roles, instead of the free agent quarterback who's passing for hundreds of yards a day without an interception in his personal training sessions.

Deadspin writer Samer Kalaf’s headline is longer than his post, which merely consists of a Twitter post by ESPN’s Adam Schefter stating that San Francisco might have to start Nick Mullens (Nick who?) in Thursday night’s game against Oakland. The headline reads: “Not Colin Kaepernick Is Questionable For Tonight; 49ers Might Instead Start Also Not Colin Kaepernick”. In a previous post, Kalaf had featured a video of Kaepernick throwing to a lone, unguarded receiver on an otherwise deserted football field.

TMZ’s headline blared: “Colin Kaepernick: Desperate NFL Teams Still Won't Call”. The TMZ story says some NFL teams are getting down to emergency quarterbacks, but Kaepernick's phone is still not ringing. Buffalo is going with Nathan Peterman at quarterback, and the New York Giants "backup prodigy" Kyle Lauletta was just arrested for disorderly conduct. Jacksonville's best option behind slumping starter Blake Bortles is Cody Kessler. "There's more ... but you get the point," says the TMZ story, along with these observations:

"Still, sources connected to Kaepernick tell us while journeyman Matt Barkley (8 career TDs, 18 career INTs) got the call from Buffalo, no one has reached out to Colin (72 career TDs, 30 INTs).

"When asked why Buffalo didn't kick the tires on Colin, head coach Sean McDermott said, 'I know Brandon [Beane] is always looking at all the different options that are available to us, so we’ll leave it at that.

Meanwhile, TMZ notes, "Kap is still training like a maniac — working out and throwing every morning at 5 AM with his trainer." Below the story were photos of Kaepernick lifting weights and poised to throw to his perennially wide-open receiver. Without facing pressure from the likes of the L.A. Rams' superstar pass rusher Aaron Donald.

The New York Daily News’ race and sports writer Carron J. Phillips belly-ached about Buffalo’s quarterbacking mess and how, if not for white privilege, the Bills would hand the starting position to Kaepernick. "To better understand white privilege just look at Kyle Lauletta and the QB mess of the Buffalo Bills," reads his headline. Out of the starting blocks, Phillips quips:

"Two-thirds of the state of New York’s NFL teams share the same colors as the American Flag, and in the past few days, they’ve also shared this country’s, and the league’s, biggest issue: Race."

Phillips explained how on Tuesday a belligerent Lauletta, who nearly ran over a cop and resisted arrest, "was just a backup quarterback that had been inactive for the Giants all season. Now he’s a shining example of white privilege. Because despite all that he did on Monday and Tuesday morning, Lauletta hasn’t been tased, kicked, stomped on, or beaten by police." Which is how Sterling Brown of the Milwaukee Bucks, an African-American man, was treated for illegal parking last winter.

Thus, race and racism continue to be a thorn in the NFL's side due to its failure to properly address the situation, Phillips states. He says Lauletta may be the new "poster child for white privilege," and Buffalo Bills owner Terry Pegula is a racist whose three white quarterbacks have failed miserably.

Buffalo "has recently become the latest example of how racism can affect an entire franchise," and the Bills "might have thought about giving Kaepernick’s agent a call,'' Phillips says.

The beat just goes on and on for Kaepernick's frustrated media apologists.