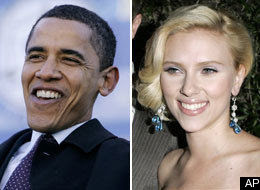 As the city of Denver prepares for this week's Democratic convention, numerous Hollywood celebs are planning to attend in support of Barack Obama and to advocate for pet issues. Gushes Variety,

When Barack Obama accepts the nomination before some 75,000 people at a Denver stadium on Thursday, he'll be surrounded by a contingent of average Americans from all walks of life --- just not Hollywood performers, musicians and other famous figures who have so publicly championed his candidacy.

So what, exactly, will be the role of celebrity during the week of the Democratic National Convention?

McCain ads comparing Obama to Britney Spears and Paris Hilton have been effective and have made Obama's celebrity-surrogates more cautious. As a result, celeb-surrogates have focused on issue advocacy and found other outlets for their multitudinous talents:

Obama campaign sources say that no edict has been issued to limit industry involvement, although they are being judicious in how to deploy some Hollywood surrogates. Stars like George Clooney, Scarlett Johansson and Matt Damon, while not expected in Denver, are hosting fund-raisers, which are usually restricted to the press and therefore get less media coverage.

But it won't be all work and no play for the celebrities and "average Americans" attending the Democratic convention this week. There will also be lots of parties. According to Harry Shearer, it's all about the parties:

Lot's of "P's" to look forward to this week in Denver: party (Democratic), protests, Presidential nominee, PUMA's and most importantly, parties.