Newsweek's Amnesia: President Hillary Is 'Where America Is Great Again'

Newsweek published a wishful article, Wednesday, on what the United States would look like under a President Hillary Clinton.

"'Who runs the world?' Clinton asks, positioning her glasses higher on her head as she stares down at her documents," Chris Riotta wrote, eight months after the 2016 election. "'Girls. Girls run the world,’ [former aide Huma] Abedin responds, closing the door and leaving the president to her work."

The piece, titled "President Hillary is 'Where America Is Great Again,'" hypothesized policy achievements that are anything but reality currently. "It’s 9:30 p.m., and madam president spent the day successfully rallying House Republicans and Democrats behind a health care bill that will improve upon her predecessor’s landmark initiative, the Affordable Care Act," Riotta said. "The bill passed an hour ago, but she isn’t anywhere near done fulfilling her duties to the American people."

Riotta also cited the Twitter account @IfHillaryHad, with the fake name "Alt-POTUS 45," which posts mock tweets by the fictional president with lingo used by the actual president. One tweet read, "DAY 170: Sent Chelsea to a meeting on my behalf. Too tired, no stamina. Sad!"

"It’s not just this one Twitter account that regularly escapes from Trump’s America to a fantasyland," Riotta wrote. "Countless users continue sharing their thoughts on what is happening in Clinton’s America, a nation less consumed by Trump and the GOP’s controversies and more focused on their own daily lives." 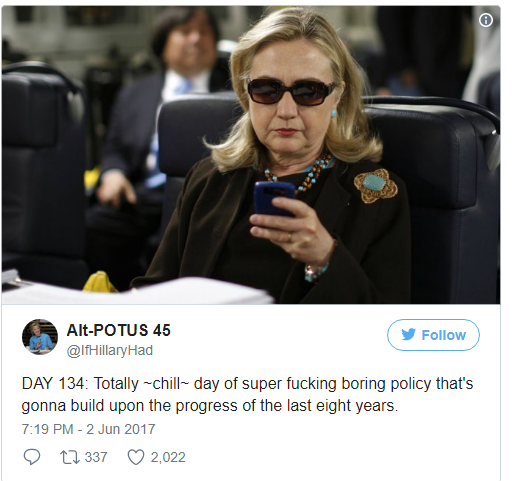 "Still, that’s exactly what the alternative president wants, and probably real-life Hillary Clinton as well: to work on the 'boring policy stuff' nobody would probably care about while avoiding public meltdowns, Twitter spats and pointless fights with newscasters," Riotta concluded. "Can you even imagine an America like that anymore?"

Riotta's article exemplified how the media hasn’t learned even one lesson from the 2016 election, such as being out of touch with Americans outside the metropolis, especially Washington, DC.

Veteran journalist Salena Zito has traveled across the country by car to hear from everyday Americans about their lives and how they're affected by Washington policies. She summed best the media's perception during the election:

It was there in plain sight for everyone to see if they wanted to; it is clear that they did not and that is a bias towards him and prejudice towards the people that needs to be corrected. What is remarkable right now is that a large portion of the pundits and some reporters still don't get it; they still aren't listening, they still aren't opening their minds to the concerns of the voters who placed him in office and they are still missing what is hiding in plain sight for all of them to see; this guy connects with a large portion of the United States.

Zito added, "The media miss the things that matter to voters like how Trump thanks his voters verses Clinton's thank you; he holds rallies in the very regions that provided him with a win, while Hillary thanks the big dollar donors in Manhattan."