This morning on MSNBC’s Morning Joe, co-hosts Joe Scarborough and Mika Brzezinski discussed the Bergdahl controversy with their panel of guests. Julie Pace of the Associated Press told the panel that the president remains “defiant” in his decision of how his administration brought back Sergeant Bergdahl. Joe Scarborough called the president “extraordinarily tone-deaf.”

Last week, Scarborough shared a heated exchange with MSNBC’s Chuck Todd when discussing the behavior of Berdahl’s father. This morning, however, the panel discussed their confusion with the way the president and his staff have handled the backlash from the Bergdahl swap.

Co-host Mika Brzezinski asked Julie Pace if the White House staff was aware or acknowledged the fact that they have completely mishandled the situation which has caused a "typhoon of controversy." Brezezinski argued that the blame falls soley on the White House, not the media or the right.

Pace explained that the president’s staff seemed to be turning a corner and noticing that they have not been speaking “plainly” about the topic, but she didn't foresee the president changing his tone any time soon. Pace even argued that if the president did decide to speak out on the Bergdahl release later this week he would remain “pretty defiant” in defense of his actions including the Rose Garden ceremony with the parents of Bowe Bergdahl.

Joe Scarborough continued to air his disapproval of the situation by arguing that the continued defiance of the president shows how “extraordinarily tone deaf” he is. Scarborough explained it to be “unbelievable” that the president can’t seem to understand the concern coming from the men and women who served with Bergdahl and the families of the soldiers who may have died as a result of searching for Bergdahl.

The discussion was a stark contrast from recent MSNBC spin aimed at painting Republican discontent of the Bergdahl situation as "swiftboating."

The relevant portion is transcribed below:

MIKA BRZEZINSKI: There were Democrats and Republicans who wanted Bowe Bergdahl out. Both sides of the aisle were trying to get him out. Julie Pace, the president needs to speak plainly on this. In my opinion they're blaming the right, they're blaming the media. It is the White Houses in my contention that caused the typhoon of controversy over this by totally mishandling how to frame it. Do they see that? 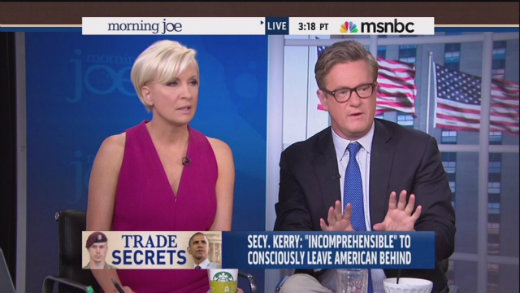 Let me rephrase the very first question I came to you with. Do they see that at least?

JULIE PACE: Again, at the staff level I think they are starting to see that, but, you know, the president spoke about this situation a couple of times when we were traveling in Europe last week and the last time that he was asked this question, he made very clear that he is going to stand by this decision and he says he makes no excuses for not only the decision he made on how to make this trade, but also the way they handled it. He would make that decision again. And I think you are going to hear him be pretty defiant if he speaks about it again this week.